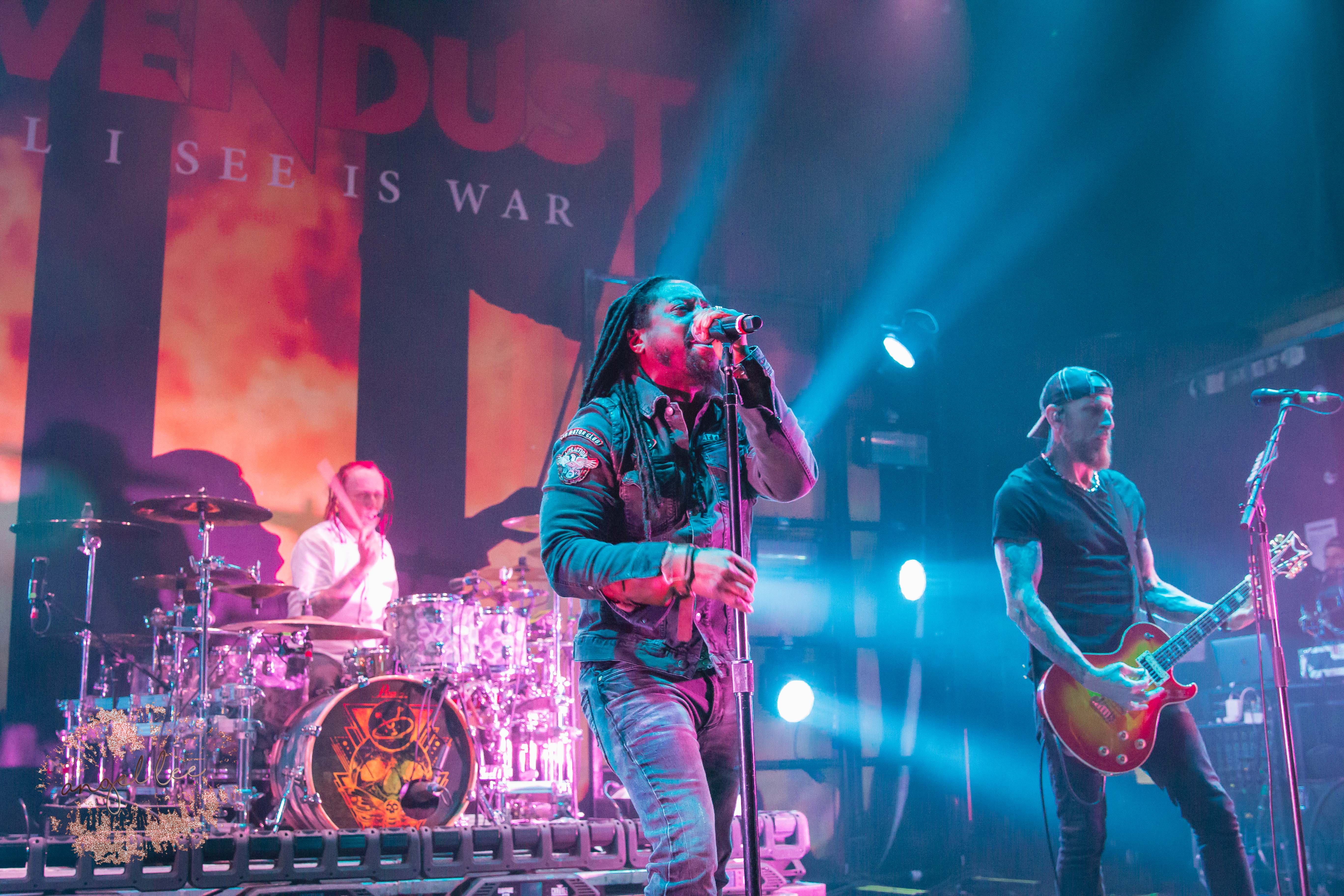 Sevendust heats up the Blue Note

Wednesday, Feb. 27 was a blustery, cold day to wait all day in line but when the Blue Note in Columbia, Mo., plays host to Sevendust and the “All I See Is War” tour, it’s bound to be a hot show. Sevendust knows how to pack a bill, this time with Tremonti, Cane Hill, Lullwater, and Kirra.

Kicking off the night was Oklahoma-based band Kirra, which includes Zach Stafford on drums, Ryne Mcneill on bass, Daxton Page on guitar and Gabriel Parson on vocals. They recorded their first full-length album “Run Away” in January 2015, which garnered them invites to tour with bands Saving Abel, Smile Empty Soul, The Veer Union and Tantric. They were a good choice for an opening band as they set the mood with good energy.

Kirra brought a refreshing sound. The crowd was unfamiliar with the band but soon became quick fans with songs like “My Disease,” newest single “Sixteen Suns” as well as unreleased new songs like “Free” and “Caving In.”

The Georgia-based group includes Joseph Wilson on drums, Roy “Rey” Beaty on bass and vocals, Daniel Binnie on lead guitar and the strong vocals of John Strickland on rhythm guitar. The group draws comparisons to Seattle-based Pearl Jam and the sounds of early grunge are no surprise when you learn of the scene’s heavy influence on the young men of Georgia starting in a small room on Lullwater Street in 2007. So much so the band relocated to the Northwest with the goal of bringing their grunge-inspired Athens sound to record in London Bridge Studio, where some of their life-crafting idols laid down their first tracks.

Opening bands usually don’t have many bells and whistles and leave it up all to music and interaction to entertain a crowd. Lullwater took full advantage of the opportunity and never fell short of winning over the fast-filling crowd by playing songs like “Tug of War’ and “Blind,” released tracks from the self-titled album recorded at London Bridge Studio.

Cane Hill, a self-proclaimed “pretty good New Orleans metal band,” was in the center of the line-up and filled the role and then some with a powerful performance from members Devin Clark on drums, Ryan Henriquez on bass, James Barnett on guitar and vocalist Elijah Witt. They mix a tough Nu metal sound, hip hop and bits of clean vocals.

It was no denying the crowd was there in support of co-headliner Tremonti, fronted by guitarist pro Mark Tremonti of Creed and Alter Bridge. What started as a solo project in 2012, born of material in Tremonti’s head that didn’t fit either of his other projects, formed into Tremonti. It’s a band of great musicians that, most recently, consists of Ryan Bennett on drums, Tanner Keegan on bass and Eric Friedman on guitar and backing vocals. A far cry from his previous work in Creed and Alter Bridge, Tremonti is a far more guitar solo-driven, thrash metal band that plays loud and fast. There is no denying the talent of Tremonti, which is setting stages on fire across the country in support of their latest release, “A Dying Machine.”

Guitar players Friedman and Tremonti almost seem to have a friendly competition on stage as to who can melt faces faster with their blazing guitar solos. Backed by a not-to-be-outdone rhythm section, Keegan and Bennett bring a thunderous beat to a hard-to-match guitar battle. Tremonti fills the frontman role with ease as he wields the ax and mic with energy and talent.

Few bands create a loyalty like Sevendust. Many fans start the night off with either a Sevendust V.I.P. meet and greet soundcheck, a Connolly guitar clinic or a Rose drum clinic, all special experiences that fans jump on quickly.

Fans will travel all over the country to catch a Sevendust show and the excitement is always high. Over a more than 20-year run, Sevendust has generated generations of fans and it shows when you see kids with their parents rocking the rail, horns up and smiling.

An Atlanta-based band, Sevendust brings forth John Connolly and Clint Lowery on guitars, Vince “The Boss” Hornsby on bass, Morgan Rose on drums and Lajon Witherspoon on vocals.

Sevendust brought it just short of actually blowing the roof off the joint. Fans were about to burst when Sevendust hit the stage and broke into “Dirty” off “AISIW” and then filled the rest of the set with fan favorites like “Denial,” “Waffle,” “Enemy,” “Decay” and “Thank you.” Every Sevendust show is filled with so much energy; the band mixes audience interaction, passion, heart, love and just good times for a grand mixture of what a rock show should be.

“The Boss” uses every inch of the stage to make every fan feel that connection. Purple-dreaded Rose makes an art and show of bringing the heartbeat to life behind the kit. Connolly and Lowery are shows in themselves with their mastery of soul-wrenching riffs and head-banging crunch. The passion of Witherspoon is no doubt a strong driving force in the band and it shows in every performance. The power and passion in his vocals are unmatched.

The greatest part of a Sevendust show is always their music, but it’s made extra special when the group’s children like the Witherspoon clan make special appearances, as in with Rose behind the kit, a little side stage bonding with “Uncle Vinny” and young Miss Witherspoon’s quick hello and wave to the crowd. You can’t help but feel you are a part of something special.

Closing out the night with fan favorites “Bitch” and “Face to Face” had the crowd at the peak of euphoria as every horn was up proudly with thoughts of “Sevendust has arrived” ringing through the minds of all the fans.

While this leg of the “All I See is War” tour is wrapping up with this line-up, spring and summer shows for all bands have been announced.