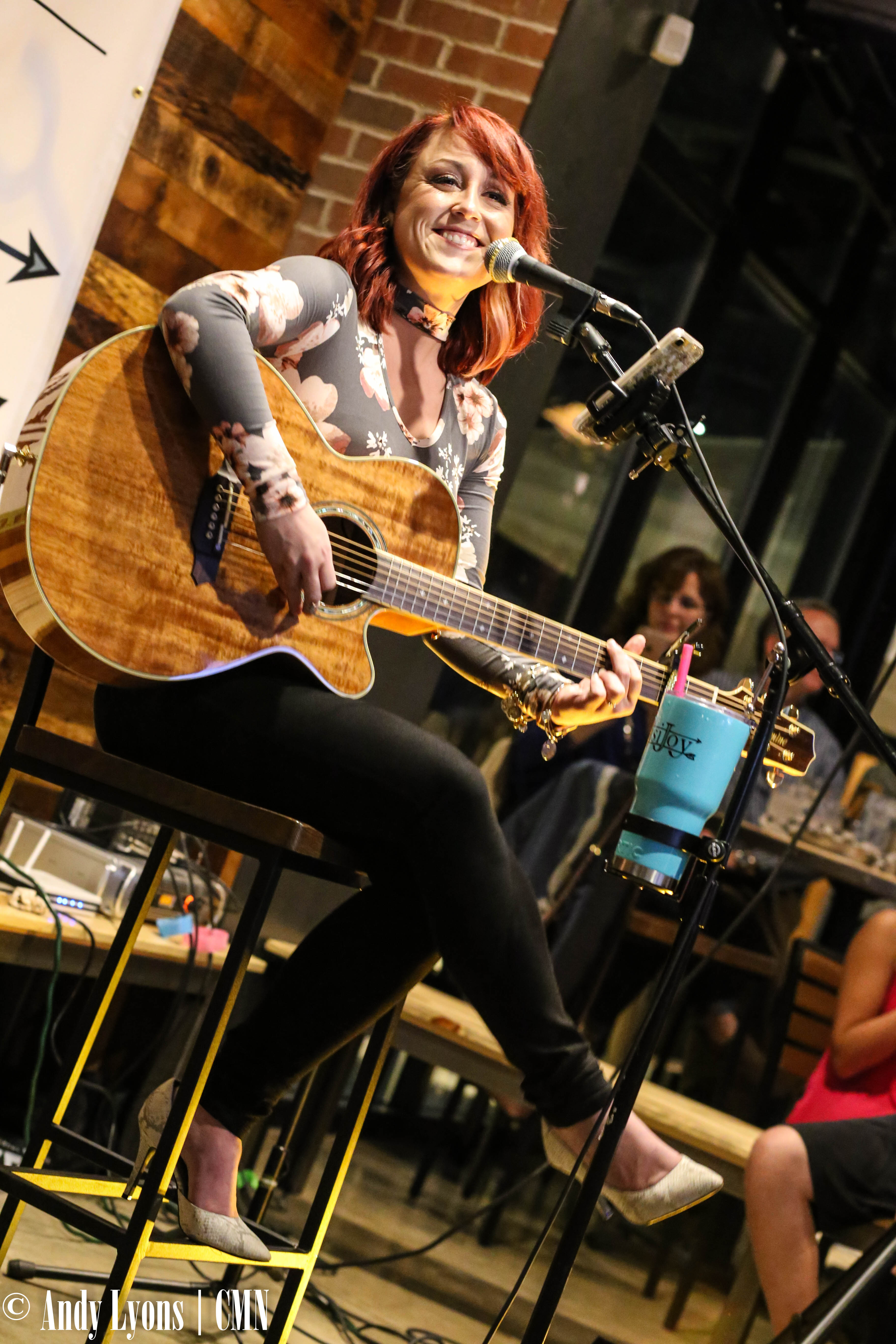 Casi Joy visits KC between battles on The Voice

After being seen on the small screen on the popular reality singing competition “The Voice” the last few weeks, country singer Casi Joy made a trip home to Missouri this weekend to play a set for her hometown fans.

Casi Joy, from Smithville, Mo., took some time before her first set Friday night at Chicken N Pickle in Kansas City to share the details of the joys and stresses of working on “The Voice.” In an episode that aired last week, she was put up against Ashley Levin, a familiar face from Nashville where Casi has lived for two years.

“It was definitely the most stressful round so far,” Casi said. “I got paired against one of my friends out there, Ashley. (She’s a) fellow Nashvillian, fellow country singer. It was very bittersweet to go against her because she’s one of my good friends but it was also super fun to work with her, but we knew that in the end there was going to be a winner and possibly a loser. So, we just went in and really worked hard for the steal, making it that good of a battle that nobody went home.”

The two, who are both members of country superstar Blake Shelton’s team, battled to “How Blue” by Reba McEntire, at times singing together and others with each taking their own sections of the song. As they finished, the judges gave their thoughts on each singer’s performance but it was up to Shelton to make the final call on who won the round.

“That was probably, literally, the best moment of my life because I was already preparing myself for the loss,” Casi said of waiting to hear the answer. “I was just like, ‘ya know, Ashley’s this and that and that’s who Blake’s going to choose’ because I’m a bit edgier. I’m not your cookie cutter country singer. So I figured that if it came down to preference that’s who he would choose. So when he said my name it was just like pure shock and just, dreams coming true.”

After winning the round, Casi moves on to the knockout rounds, which are already recorded and will air April 3 and 4. During the round, the performers are paired with people on their teams and sing full songs separately, with their opponent joining them on stage. Despite CMN begging for spoilers, she said viewers would have to watch the round with everyone else.

Casi also described the feeling walking into the blind audition with all four judges.

“It was very nerve-wracking because for the blind auditions you walk on stage and the room is dark and it’s completely silent,” she said. “They can’t say ‘here comes Casi Joy’ clap, clap, clap, clap. It’s just completely silent and you walk on and you hear the drums click and you’re off to sing for your life. It’s definitely a different kind of show for me, gigging all over this was totally different. Everything was on the line for 90 seconds.”

She explained she had a trick up her sleeve if she didn’t get the judges to turn around early in her audition, although she ended up not needing it.

“I had this whole huge ending planned, because I was like ‘if I don’t have ‘em by then, then I’ve got this last note to maybe get ‘em,”’ she said. “So when Gwen (Stefani) turned right away I was like ‘whoa I didn’t need to freak out over that ending so much.’ I was just not expecting any of that at all.”

After all four judges turned to face her, confirming she made it onto the show, Casi had to choose from four legendary artists to be her coach.

“That was really weird,” she said. “I’ve seen ‘The Voice’ before and everything, it got to the time where Carson says ‘Casi who do you pick?’ And I sat there for a second and I really said ‘is this real, do I really pick now?’ In my heart I just knew I needed to go with Blake, as far as not only being a country singer, but he’s just such a good person and coach and he works with his artists off the show and as a musician for life. That’s just what I thought about and went with.”

She described working with Shelton as what is seen on camera.

“He’s just a down home country boy, super sweet, down to earth,” she said. “He’s always laughing that super loud awesome laugh that he does. You walk in the room and he feels like family right away. It makes it really comfortable and easy to come out of your shell to work on new things and not feel scared.”

One of the things that set Casi apart from contemporary country artists is her voice. She sings with a yodel that hasn’t been popular in years.

“It’s really cool to get a chance to break out with a different sound like that,” she said. “It’s not the bro country or the standard right now. It’s nice to break free from that and to get positive recognition from it. Yodeling hasn’t been cool for a really long time, so to be able to bring that back and it to be for the biggest moment of my life is really cool.”

Having a chance to compete on “The Voice” has been a boon for Casi. After playing small venues with no noticeable audience or recognition, she’s now selling out small venues and people recognize her from her performances on television.

“Before I was in Nashville playing four hours a day on the same bar stool to usually an empty bar unless it was a holiday, on a Saturday, in perfect weather,” she joked. “And so now to play on a rainy Friday and it’s selling out is a whirlwind.”

After “The Voice” has concluded, Casi plans to release an original single and then go on the road. She already has tour dates across the U.S. and Canada, with more to be added. The next round of “The Voice” airs at 7 p.m. CST April 3 and 4 on NBC.

Listen to CMN’s interview with Casi Joy in its entirety below: