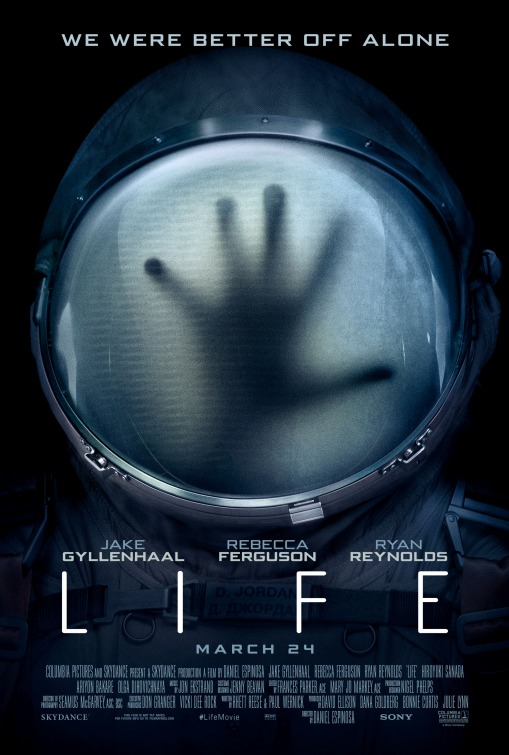 ‘Life’ is ‘full of disappointment’

Much like life itself, “Life” is, at times, hard to watch and full of disappointment. “Life,” which stars Jake Gyllenhaal, Rebecca Ferguson and Ryan Reynolds, is the standard science-fiction story of a crew aboard a space station where something goes terribly wrong.

The film’s biggest weakness is the writing. It is downright awful and oftentimes laughable. With lines like, “I miss my fucking dog,” “Cue Instagram!” or when Jake Gyllenhaal reads the children’s classic “Goodnight Moon,” the film manages to the miss the mark every single time.

Not to mention, the superfluous bird metaphor made by the crew member who is paralyzed from the waist down. While being examined by the crew’s doctor, he references that being in space makes him feel like a bird. Later when that same character reaches a critical moment he utters the words, “I’m up,” as if to reference he can “fly” one last time. When a movie’s writing is so bad that you find yourself almost laughing when a character is experiencing such a serious moment, something is wrong.

In addition to the shoddy writing there is the completely unoriginal storyline. Being that many major studio productions are official regurgitations of old classics, when an original title appears it is both shocking and exciting for audiences. For “Life” to emerge and be this bad seems insulting. How many science-fiction films need to be made about people aboard a space station where something goes wrong? Sure, the thought of being on the International Space Station with just five other people for eight months is terrifying, but we already have movies that tell these stories and do a much better job (ex: “Alien”).

Of course, “Life” looks great. However, when looks are all you have to save you does that justify your existence? “Life” is essentially a D movie script with an A movie budget. It boasts major stars that are forced to utter embarrassing lines and pulls out all the old stops from movies like “Alien” or “The Thing.” The only reason I would recommend seeing “Life” would be to give yourself a good laugh or provide an excuse to waste 110 minutes of your time.

The one saving grace of “Life” are the few scenes where the creature takes over the bodies of certain crew members. These moments are hard to watch due to the horrifying visuals and sounds as opposed to atrocious dialogue. Still, “Life” is a bore that I wish ended sooner.