LATEST NEWS
04:23 AM
Home Entertainment Reviews ‘More Fun In the New World:’ The Unmaking and Legacy of LA Punk 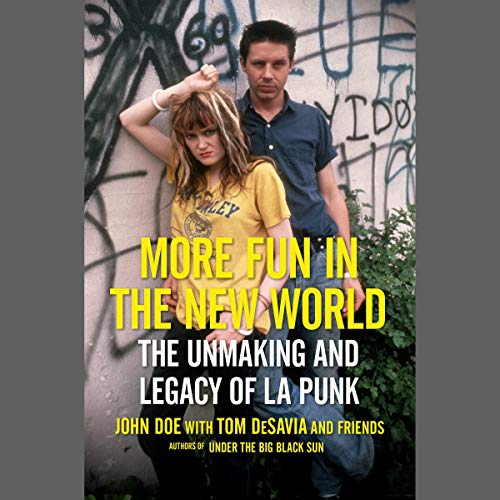 ‘More Fun In the New World:’ The Unmaking and Legacy of LA Punk

Three years ago I bought a book titled “Under the Big Black Sun,” a riveting tome about Los Angeles punk rock circa 1977-1982.

The book was presented by John Doe of the band X, Tom DeSavia and friends. The friends added something extra to the story, creating a multifaceted literary experience.

The years of 1977-1982 marked the original germination and growth of punk in Los Angeles.

After that period of time, the scene didn’t evaporate – it became splintered, factionalized, with more participants who were there for the initial punk explosion transforming musically, moving beyond the three-chord rumble and rancor.

The growth of hardcore at the dawn of the ’80s stood as a dividing wedge, with scene violence being a point of contention, leading some to move away from punk, as it once was, and onto other genres, rockabilly, power pop, Paisley underground, cow punk, a precursor to and influence on what is now common called Americana.

I never thought a sequel to “Under the Big Black Sun” would come about but “More Fun in the New World” picks up with a focus on 1982-1987.

Rarely is a sequel as good as the original, but “More Fun in the World” is one shining exception. Some of the same voices from “Under the Big Black Sun” return, including essays from Henry Rollins, Jack Grisham, Jane Wiedlin and Charlotte Caffey.

Reading the book in linear order isn’t essential or necessary. After reading the first few chapters in sequence, I found myself jumping from chapter to chapter to the voices I found to be most interesting or whose music I was a fan of.

The best way for me to relay the greatness of this book is to focus on the most riveting chapters.

The unflinching candidness in Charlotte Caffey’s chapter (“Deliverance”) is remarkable. It’s about her heroin addiction during the height of the Go-Go’s fame.

The chapter is shocking — it stands in such stark juxtaposition to the public image of the Go-Go’s, the bubbly, care free, Valley girls next door. They partied hard on the road, but heroin was a bridge too far. Charlotte gets clean, and the tale of how she got there is harrowing.

The chapter I found to be the most poignant in the book wasn’t even focused on music.

John Doe’s “The New World” is about a socio-economic shift in the ’80s and the acceleration of deindustrialization. In a book about culture and music in California, this chapter stands as an anomaly in that its backdrop is the Midwest, which X toured through, and lead singer Exene Cervenka felt a connection to, partially related to her father’s Chicago upbringing.

Doe perfectly captures post-industrial economic deterioration and how it gutted once thriving communities and cities and damaged the spirit and psyche of those who worked and lived in such places.

Although not directly about music, this chapter does feed a greater understanding of the punk and post-punk of that era, in understanding the political and social climate of the time that said music was being made in.

Jack Grisham’s chapter (“The Ongoing Cost of Low Grade Immortality”) is written in such a dark, humorous and beautiful prose. He says more with just a few pages than most scribes say in a lifetime.

It’s a tale of what happens when the party is over, but you can’t forget the memory of your previous self or fully let go. So much of punk, especially with the advent of hardcore, rested upon youth culture and youthful energy, and Grisham’s chapter deals with what happens when a punk rock madman has to face his own aging, understanding that moment has passed, yet he’s still addicted to and in love with the electricity he once wielded in his wilder days.

Contributors in “More Fun in the New World” aren’t limited to musicians. Those who work within other mediums are also featured, illustrating the influence of punk beyond music.

Shepard Fairey drops a stellar chapter with “Prep School Confidential: Finding My Voice,” using his words to highlight the overlapping relationship between punk music and visual design. The inclusion of Fairey is a testament to the sheer power of the punk of greater Los Angeles, in that it could reach him as a youth on the other side of the country in South Carolina. The auditory rage of Black Flag became his catharsis while living in such an uninspiring place.

“More Fun in the New World” contains remarkably insightful commentary about the impact, significance, longevity and legacy of an underground musical movement. In both the intro by Tom DeSavia and the final chapter by John Doe, the explosion of punk in Los Angeles is metaphorically compared to planting seeds. This book examines further growth sprouting from those seeds.