LATEST NEWS
07:28 AM
Home Entertainment Video Games ‘Battlerite:’ The Little MOBA That Could

‘Battlerite:’ The Little MOBA That Could

Let’s talk about MOBAs. Multiplayer Online Battle Arenas are some of the most popular online games out there today. The most popular title of the genre is “League of Legends,” but there are hundreds upon hundreds of similar games, and they all follow the same basic formula – players are placed on a team and given an objective and a top-down view of the battlefield. They are expected to attack players on the opposite team with attacks tied to specific keys, all of which have different cooldowns (time allotted before the player can use that attack again).

MOBAs can be scary things; their control maps can be overwhelmingly complex for people used to the simplicity of first-person shooters, and they’re known to have some of the most vicious and competitive fanbases in the world of gaming. Games like “League of Legends” often scare away new players with the intensity required to become a part of the community, and so MOBAs can present themselves as difficult to enter into, if someone isn’t used to gaming in that particular style.

Enter “Battlerite,” the second MOBA from Stunlock Studios. “Battlerite” is a 2v2 or 3v3 fighting game that pits you against other players in a best of three deathmatch (ie, last team standing wins). It uses WASD-key movement, and attacks are keyed to the mouse buttons, Q, E, R, and the space bar. Moderately simple (while still typical) controls and a straightforward play style make this an ideal entry into the genre. I’m fairly new to the MOBA game myself, and I was able to pick Battlerite’s controls up after a few rounds in the tutorial mode.

MOBAs are famous for their large and varied character selection, and “Battlerite,” though it doesn’t boast the numbers of the most famous MOBAs, doesn’t disappoint. Characters are broadly slotted into the three categories of Melee, Ranged, and Support, but within these categories there’s a lot of variation in play style. My personal favorite is the not-quite-human pyromaniac Ashka, followed by the “Overwatch” Reaper-esque character Ruh Kaan. 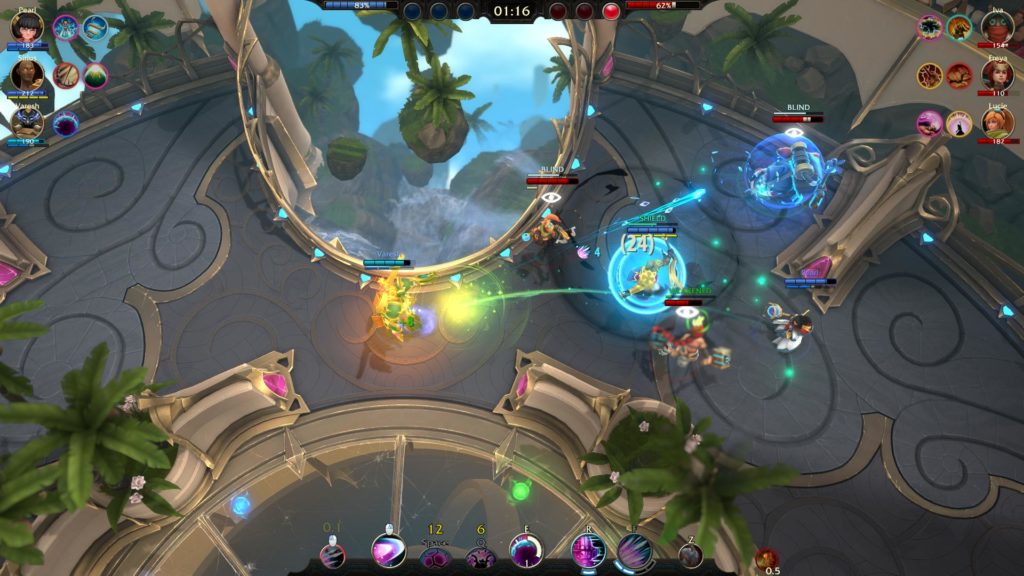 The character roster is traditional to the point of being almost stereotypical – all the tropes and expected character types are there, and a seasoned MOBA player could probably identify which “League” character the “Battlerite” avatars are derived from – but that doesn’t mean that the characters aren’t fun and lovable in themselves. Some of the characters are a tad cringe worthy, such as the newest healer, a curvaceous female Faun, has some stunningly awkward voice lines, but in general even the most stock of melee warriors in this game has a charm to them. This charm is improved by the cosmetic items you can acquire for each character, including outfits, weapons, and poses. Earning loot boxes in the hopes of unlocking the best items is actually one of the most addictive parts of the game.

Because “Battlerite” has a smaller audience, it feels less daunting to enter into with no prior knowledge of the genre than a bigger MOBA would. A player with no experience can hop right into online battles (although the AI training is also a handy tool) and it doesn’t feel embarrassing to flounder and learn. That said, the smaller audience does mean that wait times for matches can be pretty long, which can mean that even playing just enough matches to fulfill the daily and weekly quest requirements can suck up hours of time. There is also a single-player campaign to take up time, but it pretty evidently takes a backseat to multiplayer.

“Battlerite” is currently in Early Access on Steam, which means once you buy it, you’ll get all the updates and improvements that the developers make until they decide to call the game finished. The game is already bug-free and playable without issue, so for $19.99 you can join in on the creation of a thoroughly enjoyable and not at all scary MOBA.