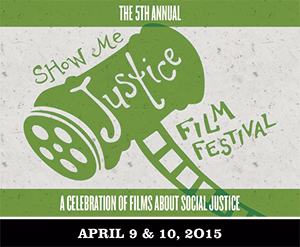 The word “social justice” is subject to a variety of interpretations. Von Schlemmer said social justice is the “essence of democracy.” He said the topics vary from poverty, to racism, to animal rights. Von Schlemmer noted that no films with an animals rights angle are being screened this year, but films on the topic have been screened in previous years.

Von Schlemmer said the words “social justice” can provoke a hot–button response. “ A lot of people interpret it in a political way, but I don’t think that’s really what it’s about it,” Von Schlemmer said.

Von Schlemmer said he does not think that the concept of social justice falls into a liberal or conservative dichotomy. Hannah Bray, a mass communication graduate assistant, said the term could be defined 100 different ways, but it often pertains to injustice or struggle.

One film that Von Schlemmer is looking forward to screening is “Dress Rehearsal for an Execution.” He said the film could be challenging for some viewers, and that it’s more “artful.”

“Dress Rehearsal For an Execution” is a film about an artist re-creating a Pulitzer Prize winning photo of an Iranian execution. The movie is scheduled for Friday at 8:30 p.m.

Von Schlemmer isn’t the only one of the opinion that some of the festival’s films can be “challenging” to the audience. Alexandra Lambdin, senior digital media production major, said some of the films have the potential to upset viewers, but they are being shown in an environment in which people can come together and discuss issues related to the films.

Another attraction of the Show Me Justice Film Festival is a personal interactive component. A number of the filmmakers whose works are being shown will also be in attendance, and audience members will have the chance to chat with them during a round table discussion and question and answer sessions. Another added element of this year’s fest is that the subjects of one film, the documentary “Conviction,” will be present. The story is that of Catholic nuns who were imprisoned for civil disobedience related to protesting a nuclear weapons facility.

The nuns of “Conviction” will be on hand for an open discussion titled “Does Religion Call Us to Peacebuilding and Anti-Nuclear Activism and Should It?” in Martin 229, Friday at 2:00 p.m.

A change with this year’s festival is that the length is reduced to two days. Last year the festival lasted for three days, on a Thursday, Friday and Saturday. Von Schlemmer said the reason for scaling back the duration was due to budget issues and the matter of weekend audience attendance.

“This campus gets pretty quiet on the weekends,” Von Schlemmer said. “It’s finding the right balance for what we can get can an audience for.”
All films will be screened in Hendricks Hall.

More information about the Show Me Justice Film Festival is available at ucmo.edu/filmfest/