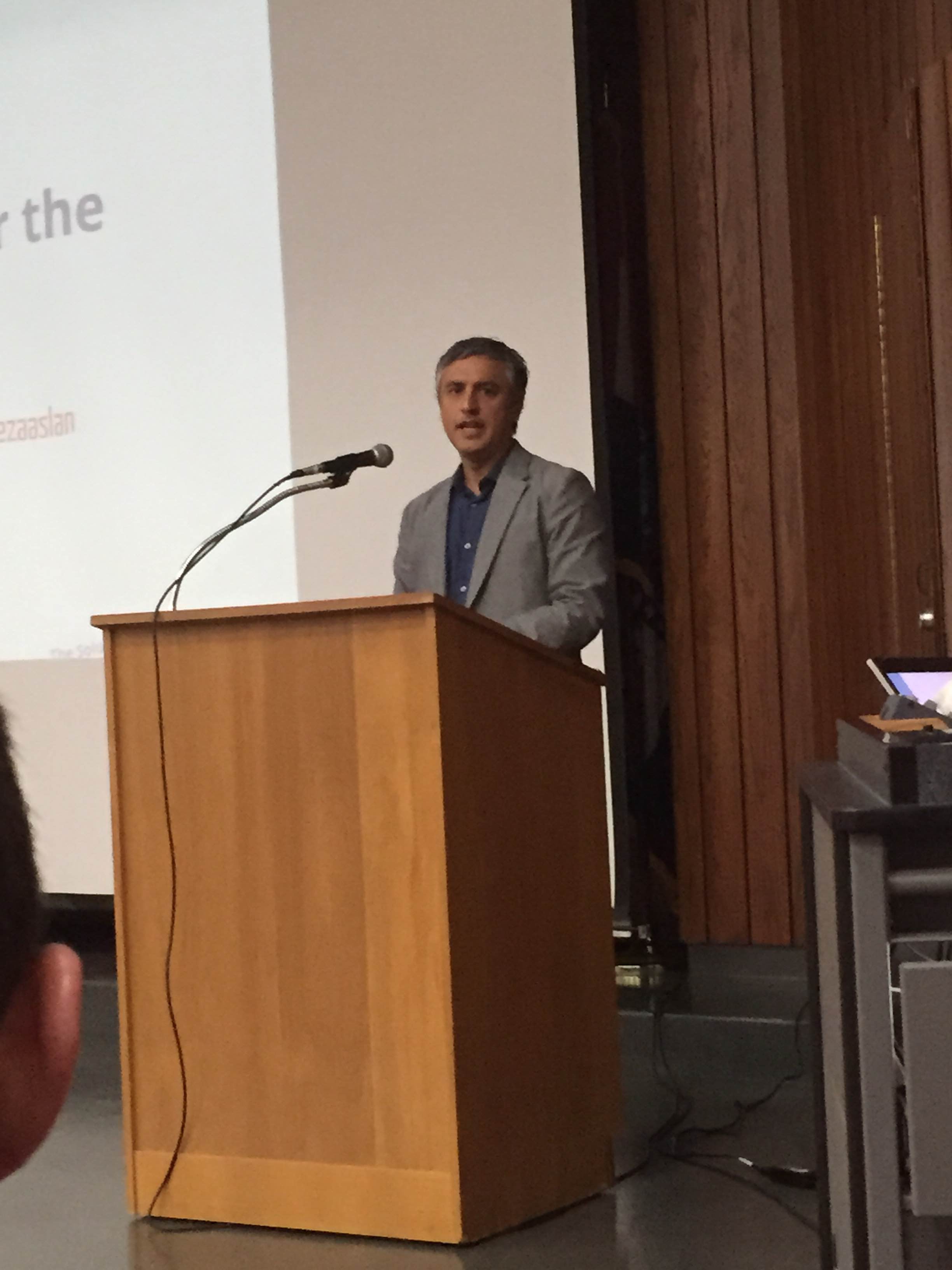 Reza Aslan is a scholar of religion and noted author, with a plethora of knowledge at his disposal. Some of his credentials include a degree from Harvard University, serving on the board of trustees for the Chicago Theological Seminary, membership of the American Academy of Religions, the Society of Biblical Literature and the International Qur’anic Studies Association. He’s made appearances on national media, including CNN, Fox News and HBO’S “Real Time with Bill Maher.”

Mackenzie Martin, a senior at the University of Central Missouri and president of Students for Political Action, said Aslan’s on-campus appearance last Thursday was the result of a poll regarding what students would like to learn about during Politics and Social Justice Week. She said Islam was a reoccurring answer. 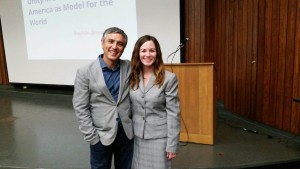 Aslan brought his wealth of knowledge to UCM as the keynote speaker for Politics and Social Justice Week, speaking on the theme of “Bringing Together a World Divided.” His presentation in the W.C. Morris Nahm Auditorium was heavily attended by an assortment of students and faculty from various academic disciplines attending, with an estimated total of 150 attendees.

“With the increasing polarization, either real or perceived, I believe that events such as these elicits the discourse necessary to move beyond decisiveness and towards a common and mutual understanding as knowledgeable citizens in our global society, “ said Robynn Kuhlmann, assistant professor of political science at UCM.

The divide Aslan spoke of was one between Muslims and non-Muslims in the U.S. The divide does not apply to all American citizens. Aslan explained that the national mood after the attacks of 9/11 wasn’t one of intense hatred towards Muslims.

“Yes, there were isolated cases (of anti-Muslim/Middle-Eastern hostility) here and there, but I remember very clearly, I remember being in D.C., speaking to Congress and talking to the White House, the message you got on both sides of the political isle was a message of unity,” Aslan said.

Aslan was born in Iran to an atheist father and Muslim mother. It was Aslan’s father’s atheism that propelled his family out of Iran, during the time of the aftermath of the Iranian revolution, and into the San Francisco Bay Area in the early 1980s, which Aslan recalled as not the best time to be either Iranian or Muslim.

“This was of course at the height of the Iran hostage crisis,” noted Aslan. “The level of anti-Iranian sentiment in the United States was out of control.”

“As an eight year old, I was a fan of professional wrestling, so I had to spend every Sunday watching Hulk Hogan beat the crap out of the Iron Sheik,” Aslan said. “The symbolism of having Hulk Hogan wrapped in an American flag, just beating, to death, practically, this wrestler wrapped in an Iranian flag was pretty much all you needed to know about how this country felt about you.”

Aslan stated that a country of immigrants cannot define itself by a common language or common ethnicity; therefore, a shared set of values becomes a defining feature and point of cohesion. Aslan declared that during times of national stress, be it economic stress, or political stress, or military stress, the national cohesion is tested, often conjoined with a rise in hostility directed at a new immigrant class or undesirable other. During the middle part of Aslan’s presentation, he noted that in centuries past Catholics and Jews faced ostracism.
“Think back to the end of the 19th Century when we had a level of anti-Catholic hysteria,” Aslan said. “We passed laws in this country curbing Catholic immigration into this country.”

“A hundred years later, and nobody talks like this anymore,” Aslan said. “Catholics are as much a part of the religious fabric of this country as anyone else.”

Alsan admitted that bigotry and anti-Semitism still exist, but they are no longer in the political mainstream in the U.S.

Aslan also walked the audience through how an anti-Muslim sentiment is maintained in the present, through levels of government, clergy, the media and eventually trickling down to the citizenry.

He said the starting point is with “pseudo-think tanks,” which have been labeled as hate groups by the Anti-Defamation League and the Southern Poverty Law Center, groups like Robert Spencer’s Jihad Watch. Aslan said millions of dollars are tied up in these organizations is what allows their message to spread and is then picked up by right leaning media pundits, politicians and preachers. And their message gets transferred to citizens who are receptive to it.

Aslan referred to the case of of Randolph Linn, convicted and sentenced in 2013 for burning down a Toledo-area Mosque the previous year. During the trial, Linn admitted he did not know any Muslims, and “I only know what I hear on Fox News.”

Aslan said that presenting positive data on Muslim-Americans, regarding issues like high levels of citizenship, education level or aversion towards violence, does little to change the mind of those who hate Muslims.

He said personal relationships have a greater impact. “Relationships change minds,” Aslan said. He also said getting to know the “other” can lead to discovering shared commonalities.

“I am telling you in a generation from now, our children will look back on this time, and they will be embarrassed for us,” Aslan said.

“In order for that moment to come, it’s going to take everyone in this room to actually make a commitment to building those kinds of relationships.”