LATEST NEWS
05:40 AM
Home News Missouri On the frontline at Ferguson 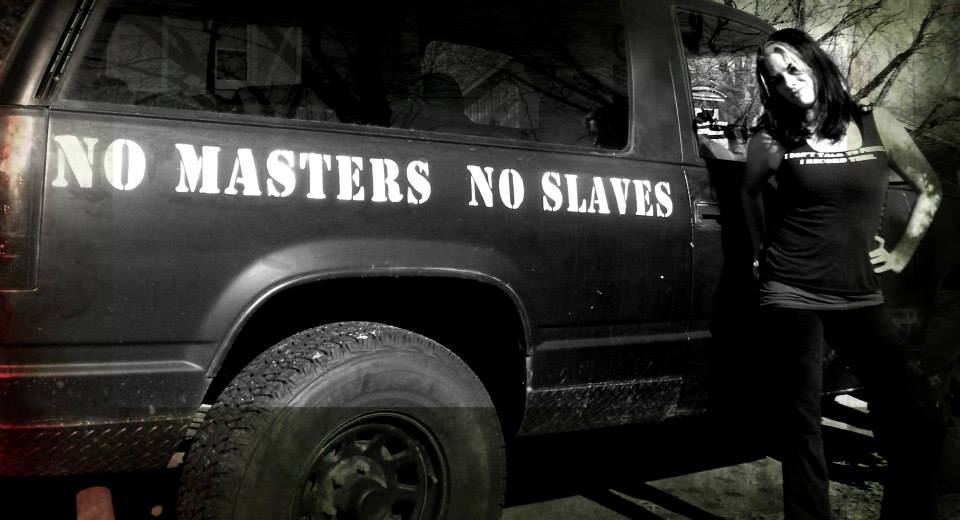 On the frontline at Ferguson

By now, the world is aware of the ongoing turmoil in Ferguson, Missouri following the killing of Michael Brown by police officer Darren Wilson. After catching word of it all, Toni “Bones” Shelton decided to drive from one end of the state to the other and see what was going on. The Kansas City, Mo. based Cop Block organizer and anarchist activist arrived in Ferguson on Sunday and got back home safe and sound late Monday night. Central Mo News caught up with her for an interview. 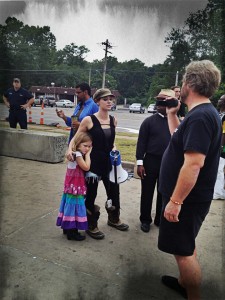 Shelton, with megaphone, and her daughter in Ferguson. (Photo submitted)

Central MO News: What prompted you to join the protesting in Ferguson?

Shelton: I have always had a compulsion towards helping the underdog. I’ve been an activist for 10 years. I wanted to see what was really happening in Ferguson verses what was being reported within mainstream media reports.  It’s the most profound experience I’ve ever witnessed.

CMN: What type of protesting regarding Ferguson have you been involved with?

Shelton: I helped to gather people last Thursday, and we went to the J.C. Nichols Plaza in Kansas City. We distributed around 300 fliers about criminal behavior and how to protect yourself from police brutality. We (members of MO/KS Cop Block) decided we needed to be on the ground in Ferguson. While there, I passed out water and Milk of Magnesium to those who had been gassed.

CMN: What is something you are able to know or feel being in Ferguson that someone watching or reading a news report would not be aware of?

Shelton: The mainstream media is trying to perpetuate the image of the looters. It is such a small minority (doing the looting). The only hostility and aggression I encountered was from the terrorists in costume. I’m talking about the police. On Sunday night at the McDonald’s, (law enforcement) gassed peaceful people.

CMN: In your opinion, is the main issue being protested a racial issue?

Shelton: Not even a little bit. There is a little bit, but as soon as you remind (Ferguson locals) you are on their side and peaceful it’s ok. It’s not black verses white, it’s not rich verses poor, it’s not Democrat verses Republican. It’s the state verses the people. All the interaction I had with other protestors was positive.

CMN: Does being involved in this type of protest tie into a greater objective with Cop Block?

Shelton: The main thing is people don’t know where to go. I got into this type of activism to hold police accountable and create an objective record. At least we can get that out to the public. Putting a name with these actions creates ostracization and transparency. I am trying to educate and make police accountable. I’ve interacted with so many in law enforcement. I use live streaming online. I feel like a journalist. I was trying to get out the real story. 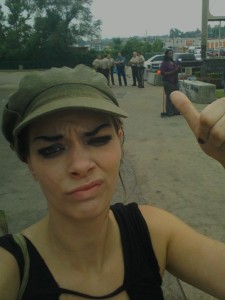 Shelton points to a group of law enforcement officers in Ferguson.

CMN: Given the current state of turmoil in Ferguson, what do you feel poses the greatest danger there?

Shelton: The law enforcement. It’s not turmoil until people get attacked by these costumed terrorists. I saw women and children of all colors. I saw people with shirts and signs reading don’t kill me. (The police) came dressed for war and violence.

CMN: Where do you see this whole situation going? Can you predict an end result at this point?

Shelton: It’s being used to create martial law. I’m afraid to see what will happen. I am way more afraid of the reality we are leaving our kids with. I hope people will practice what they preach about a free country. I don’t know what’s going to happen. I hope it’s not bloody.