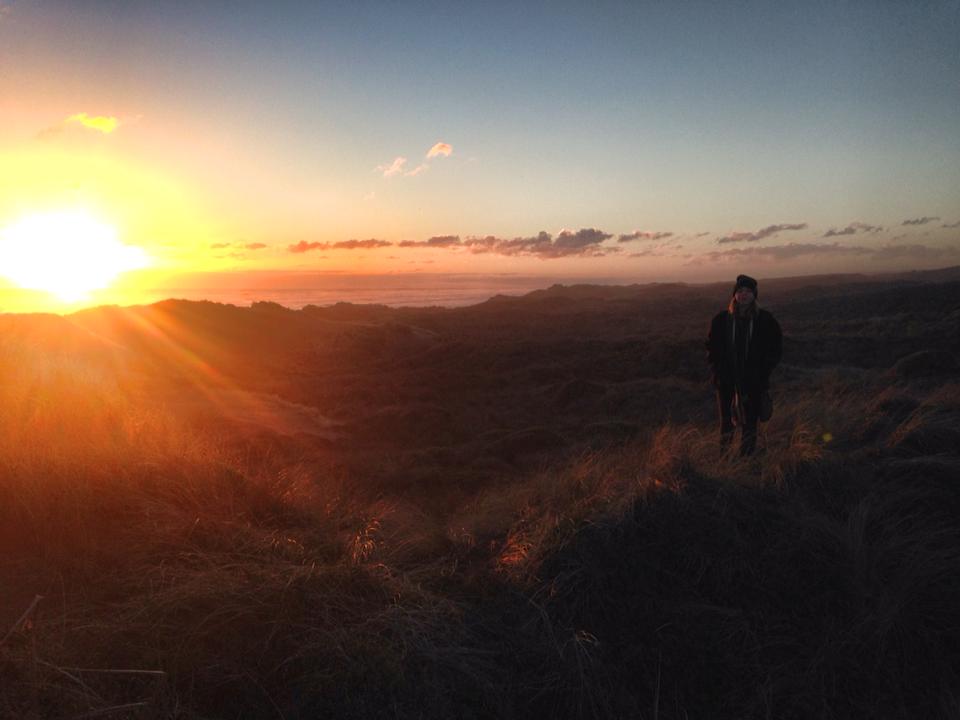 The foreign approach to American patriotism

I’ve learned many lessons on my journey thus far in New Zealand. After breaking out of the safe, strange idea-bubble that seems to surround America, it’s been interesting to see the perception the rest of the world has about us. A reality check, if you will. After being in New Zealand for nearly two months, I already feel more culturally aware of how grounded everyone else is in comparison to the American society and ideology that I’m accustomed to.

That sounds pretentious. Maybe it is. But it’s also the truth.

Ethnocentrism can be loosely defined as believing that your culture and its practices are superior to all others, which I think perfectly coincides with the typical patriotic American attitude. Everything we do trumps other countries. We are the right idea.

It’s not to say that the world doesn’t fuel this façade…to the face of America, anyway.

After talking with multiple people from New Zealand, Denmark, Germany, Austria and a long list of others, it’s heartily apparent that our culture is seen as arrogant. I’m just as guilty as the rest. 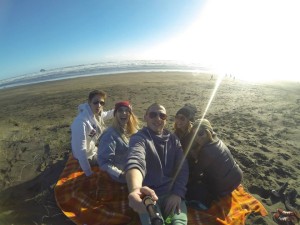 Muns, in the black beanie, with friends from Austria and Germany on the beach in New Zealand.

Many times I’ve followed bits of conversation with, “Oh, that’s weird. We do it this way.”

I’ve had to censor myself and politely nod at the beliefs and practices of others, even down to the basis of food preparation. As an American, everything else is just strange. I’m not just referring to basic adjustments for cultural differences. I almost catch myself subconsciously passing judgment.

Don’t take all of this the wrong way. I truly do think patriotism is important, no matter where you’re from. A country would completely crumble if its people didn’t have a shred of confidence and admiration for their stomping ground. However, there is always room for growth, and the ignition of growth is realization.

My realization is this: There are so many other wonderful ideas and cultures and ways of living that extend far outside the typical mindset of Americans.

We seem to have this preconceived notion that every generous act must be reciprocated and it’s so wrong. For example, the American idea that everything is give-and-take has no root here in Auckland, where people willingly give others rides around the city. It’s a sprawling city and fuel isn’t cheap, but locals sincerely offer a lift to others and expect nothing. I’m constantly wondering, “Should I pay them gas money? Should I buy them a beer?” A classmate once picked me and a few others up from our flat and drove us into the city for free when it was opposite their destination.

Speaking of transportation, my Danish flatmate is in complete awe that in many American households it’s common for every person to own their own car and to drive themselves places separately. That just isn’t practical in her eyes, which makes perfect sense.

It’s also much different because no one here is afraid of others, and for the most part no one here has the intent to harm anyone or to be evil. Of course there is going to be crime everywhere, but just humor me.

I technically live in campus residential housing, but it’s a nice walk over a bridge and through a small bit of forest to get to campus. Every Tuesday I am in class past dark and it still makes me anxious to walk through there alone. What about being mugged or raped? People here don’t think like that. Their minds aren’t wired to constantly expect the worst of everyone and to live in fear, but rather to mind their own business. Why is everyone potentially concerned with me and if they can take advantage of me? They aren’t. And to some respect, it’s self-centered that I think that way. 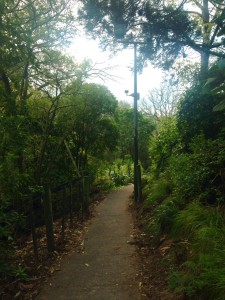 The pathway Muns uses to get to and from classes.

Maybe it’s naïve not to be paranoid and maybe it’s better to always be aware and to expect the worst, but it also probably causes way more worrying than necessary.

I’m not an America-hater and that isn’t the impression I intend to give. I’m extremely proud of a handful of things we’ve accomplished throughout time. It’s just been eye-opening to be introduced to all of these perceptions that the rest of the world has about us and to acknowledge they hold some merit.

I wish all of you to continue to be patriotic and to proudly represent your roots, but also to consider the notion that the American way of living isn’t the way of living. Challenge yourself to confront unfamiliar ideas and practices and expose yourself to new ways of living. Make a legitimate effort to pick up a couple of friends on your way to school and learn to live with less. Restore your faith in the kindness, humility, and the goodwill of others. To quote Frank Underwood, “After all, what is faith if it doesn’t endure when we’re tested the most?”