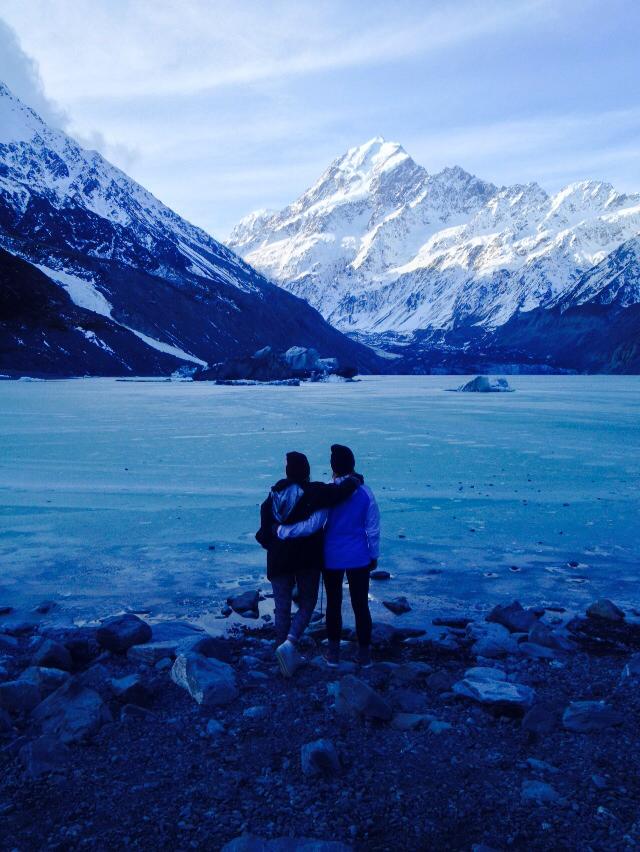 I recently embarked on a spontaneous road trip around the South Island of New Zealand. It was a refreshing journey filled with new experiences. Five days, four foreigners, one camper van, and a lengthy list of mishaps later, I have created some of the best memories thus far.

I’ve been living in Auckland, which is on the North Island. I’ve been told countless times by locals that the South Island is a region worth seeing, so I booked a flight two days before my friends’ preplanned departure and welcomed adventure with open arms.

This was my first legitimate road trip. Of course I’ve travelled before, but I’ve never actually taken a random road trip in a camper van for multiple days. We didn’t have any set plans so I had no idea what to expect. No hotel or hostel bookings, no predetermined route, just the open road, good company, and the opportunity resting at our feet. So we took it and we drove. 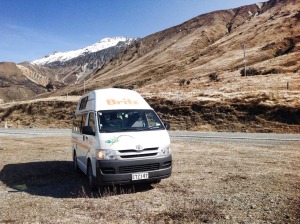 The van Muns and her friends used during their trip.

Our one hour flight from Auckland to Christchurch departed on Wednesday around noon. I travelled with Sabrina, my German flatmate and partner in crime, to meet our two friends Gonzalo and Anuar, both from Mexico, who had arrived the day before and were anticipating our arrival in our house-on-wheels. We unfolded the map, huddled around, and constructed a loose route to see as much as possible in a five-day span. First stop: Lake Tekapo. 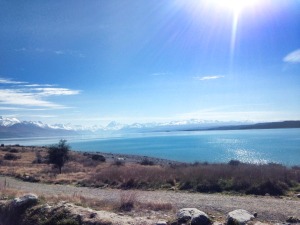 Lake Tekapo is roughly three hours southwest of Christchurch. Hearing the word ‘lake’ created an image of something as dodgy and murky as Table Rock, but Lake Tekapo is the opposite. Surrounded by snowcapped mountains, clear skies, and brisk air. It is the bluest and most translucent water I’ve ever seen. I can’t exactly explain why it’s so clean and clear, but I perched on a rock and marveled at the view. It was surreal.

Nearby is a holiday park, or a vacation spot in a sense. There are hot pools, places to camp, and showers, but we didn’t fancy paying for a camping spot, so we hauled ourselves close to the shore to spend the night. It probably wasn’t the “right” thing to do, but we’re broke college kids and it seemed logical enough.

As it turns out, a camper van doesn’t perform well on sandy ground. We got stuck.

After about 30 minutes of attempting to push and pull the van, Gonzalo and Anuar trekked to find help. Assuming we could casually ask for a favor, we found someone camping at the spot with a Jeep and tow cables who offered to lend us a nice tug. We planned on giving him a $15 or $20 tip to be polite because he took thirty minutes from his evening and maybe 1/26th of his fuel to attend to our predicament.

Initially we assumed he was giving us a hard time. He was sporting a t-shirt that read “Smartass University” and because, well, we were obviously tourists. Then again, maybe that’s how he got away with charging us $100, because we were tourists.

Although it was mildly inconvenient and made a decent dent in our travel funds, we shrugged it off, cooked burgers in the van, polished off a few bottles of Chardonnay and ended the night lying on stones by the water listening to Bob Marley on repeat.

It’s difficult to sleep long in a van when the sun greets you at full force in the morning, so we took off bright and early towards the West to Mount Cook National Park.

Gracefully placed in the Southern Alps, Mount Cook is the tallest mountain in New Zealand, towering at an intimidating 12,316 feet above sea level. It’s freaking gorgeous. There are 19 other mountains that surround Mount Cook in the national park. There are both bare and snowcapped mountains, rivers, boulders, valleys, and glaciers. The landscape is euphoric, but extremely humbling. 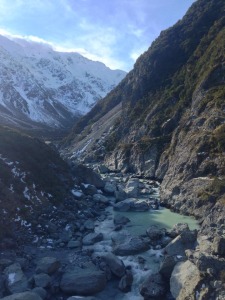 We chose to go on a hike through the park that took us to Hooker Valley, which is a dip surrounded by mountains and glaciers. We voyaged over bridges and trails to one of the most peaceful places I’ve ever been. It’s quiet and still in a way that makes you feel truly present and alive in that exact moment. It gave me a feeling of appreciation.

After spending some time with the nature, we hiked back to our van and found a place to camp for the night. We had a great day but we were all fairly tired, hungry, and ready for some shut-eye. Sabrina had planned on cooking dinner for us before bed, however, we ran into a minor dilemma. Prior to picking up the van, the company had forgotten to fill our freshwater tank.

We literally had no water. Not a single drop.

We sat in silence and frustration for a few minutes. We called the helpline in hopes of hearing that maybe we just didn’t know how to operate a sink. Finally, we accepted our fate, the guys remembered they had seen a river nearby and decided to go get water for us to cook with.

It’s an understatement to say the water needed a bit of filtering, which we managed to accomplish with our high-tech filters: a napkin around the opening of a water bottle, held on with a hair tie. Ah, camping. At the end of the day all we could do was laugh it off and add it to our storybook.

Friday was our longest day of the entire trip. Sabrina had a couple friends staying at a bach (beach house) in Punakaiki, which is on the northwestern coast of the South Island. Punakaiki was relatively far from where we were and we were itching to see the west coast anyway, so we chose to make a day of it, took the long route, and drove up the majority of the west coast.

We travelled a total of eight hours and I’m almost positive that we saw every form of nature that exists. We passed through mountains of vibrant greenery and mountains dusted with snow. We saw trees and plants that could’ve belonged to a rainforest, a desert, a beach and a hillside. We saw lakes and waterfalls. The drive was lengthy but the scenery definitely made up for it.

Sitting in a van all day doesn’t exactly create space for lively activities to take place. However, we did make an impromptu stop in Wanaka for the guys to go skydiving.

Eventually we reached our destination, drained but antsy, and ready to crack open a few cold ones. Apparently, it was a family bach that had been passed down for a handful of generations and the family had all gathered to celebrate a birthday of one of the cousins. Aside from the two friends Sabrina was meeting, the crowd was a bit more colorful than what we had expected.  They were all very kind and accommodating, but I’ll say this: we woke up at 7 a.m. to Nirvana on full blast, a group of people who hadn’t slept, wouldn’t be sleeping for a while, and were enjoying a few brews on the front lawn.

It was a fascinating experience and we enjoyed ourselves, but we (abruptly) woke up Saturday, walked down to the beach for little while, and then got the hell out.

Before leaving Punakaiki and all of its intrigue, we stopped to see ‘pancake rocks,’ which are massive stacks of round rocks. They were formed over time as sediment and water built up and pushed their way in between the boulders or something. Science. Regardless of the process, they’re extremely cool and lay along the beach and a range of mountains in the distance. 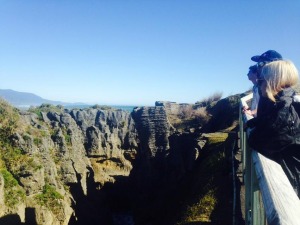 Throughout our adventure, we had only passed through tiny, quaint towns and felt like seeing something a little more populated. We pinpointed Westport on our map in hopes of entertainment, but when we got there, it was similar to everywhere else. At this point, we were still lacking a tank of water for our van and it’s as if the universe wanted to do us a solid because we found a waterspout in a parking lot. It was a random, beautiful gift. We replenished our resources as well as doing two-day old dishes in a parking lot.

We found a quiet little marina nearby and parked to cook some dinner. Now, I know I’m not an experienced road-tripper, but I had a hunch that our meals wouldn’t be luxurious.

Sabrina proved me very wrong. She prepared us each a steak with a side of fries and it was awesome. With pleased taste buds, we watched the sun exit the sky behind the boats and water and enjoyed a cold beer over satisfying conversation.

The last full day of the South Island adventure. We had to head back east toward Christchurch because my flight was the next morning, so we found Hamner Springs along the way. The area was busy, pricey, and reminded me a lot of a vacation spot somewhere in Colorado, which made me like it more. There were endless options of activities and for some reason we landed on a yellow, four-person bicycle that looked like a golf cart. We drove it around recklessly and obnoxiously, but it was amusing. 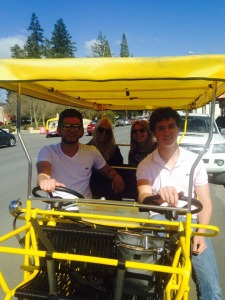 Muns (rear, right) with her companions in the yellow, four-person bicycle.

While roaming around the town, the world proved to us just how small it really is when we bumped into one of the guys who works for the residential villages at school. Seriously, what are the odds that we are on the South Island some random weekend out of the year and see someone from Auckland?

Later in the evening we stumbled upon an array of mimicked hot pools…and by that I mean we paid $20 a person to sit in a hot tub. Like I said, pricey area. There was even one that smelled repulsively of sulfur to imitate a legitimate hot pool. I will admit it was relaxing, plus we got to shower, which becomes a luxury after living out of a van for a few days.

In honor of my last night we managed to make our way to a pub up the street shortly after Gonzalo and Anuar prepared us quesadillas in the van. They treated us to a couple of tequila shots in the vacant pub in between sips of beer. The lack of business cut our time at the bar short, so we took the party to our van. We parked in the lot of a Presbyterian church, cranked some music and made our own dance party. At one point Gonzalo had turned off all of the lights except for one that he continuously switched off and on, creating a strobe light.

My last night was beyond satisfactory.

We took off to Christchurch the next morning and the group dropped me off at the airport, bringing the South Island adventure to an end. Of course I didn’t want to leave, but I left feeling full. I had taken complete advantage of the trip and had seen so much that I felt okay leaving. 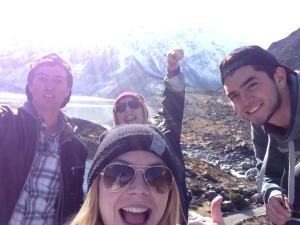 Muns, front, with her companions in front of Mt. Cook.

There were points of frustration, there were situations that could’ve been avoided, but that’s what makes it a story worth telling, right? Being on the road living more minimalistically reiterates appreciation for everyday commodities. Seeing nature and all of its astonishing creations reminds me of just how much beauty the earth presents us with. I’m so thankful I was able to experience this adventure and I couldn’t have picked better people to travel with. There is so much greatness to witness on this planet and I sincerely hope that everyone gets the chance to see it.