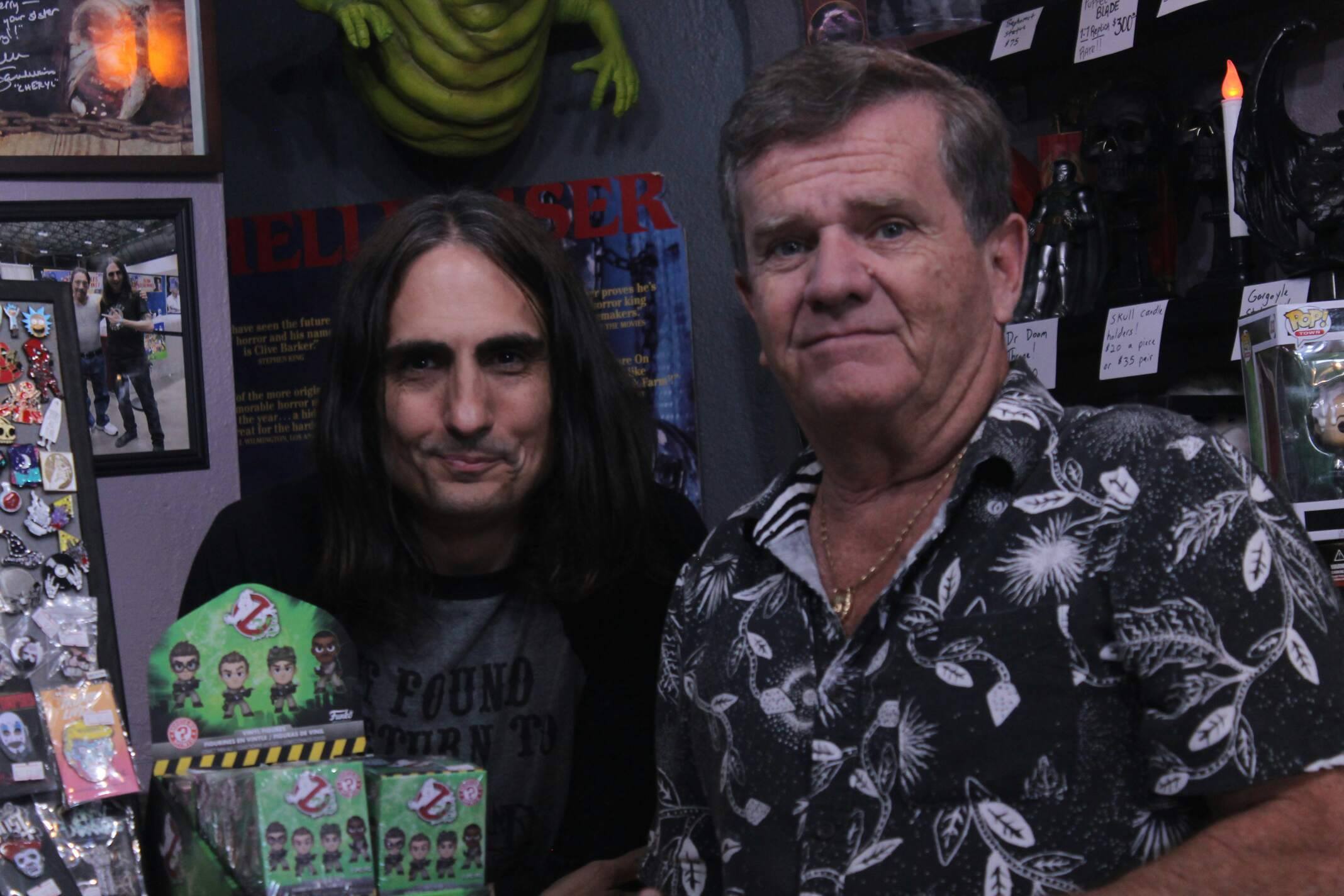 1313 Mockingbird Lane, located at 1021 ¼ Massachusetts Street in downtown Lawrence, Kan. is a labor of love owned and operated by Terry Taylor. The store specializes in collectables, with a healthy portion of merchandise related to horror, and on June 18, Taylor set a first for his shop — he organized a meet and greet appearance with Butch Patrick, the former child actor who played Eddie Munster in the classic ’60s sitcom “The Munsters.”

The walls of 1313 Mockingbird Lane are lined with action figures and assorted memorabilia. An autographed picture of Bruce Campbell of “The Evil Dead” fame is noticeable, and in the backdrop that day a television, with the sound off, was on with the black and white glow of episodes of “The Munsters” emanating from it.

Taylor said he had the idea if he ever opened a store the name would somehow be related to “The Munsters.” The store’s namesake is taken from the exact address of the Munsters’ home in the television show. Although Taylor was a fan of the show he did not seek out Patrick for an appearance. Taylor was contacted by Leila Murray, Butch Patrick’s wife, about setting it up.

Taylor said at first he thought it might have been someone playing a joke on him, and he wondered if the offer was legitimate, possible dates were thrown back and forth until a day and time was finalized.

“I got home and told my wife,” Taylor exclaimed.

“A fan told us about the store,” Patrick said. “I thought what a great name.”

The store is a recent edition to downtown Lawrence. Initially 1313 Mockingbird Lane was operated as a monthly pop up shop out of a home address. Taylor compares the original operation to a monthly garage sale. The grand opening of the brick and mortar store happened on Feb.9.

Opening the store was a continuation of a trajectory as well as a transition. Before creating 1313 Mockingbird Lane, Taylor was working in the medical field, which he said wasn’t his calling. He describes himself as a soft-hearted person, encountering trauma on the job began to take an emotional toll on Taylor. He said he ended up taking his work home with him.

Taylor said his wife suggested he open up a store, noting he was happiest when pedaling his wares at conventions. His love of collectibles extends back to his childhood, and his interest in collectibles and collections extends to multiple mediums.

He pinpoints a life changing moment when his mother bought him KISS’ 1977 album “Love Gun.” Taylor was converted into a six year old KISS fan. He said his mother wasn’t familiar with KISS and didn’t know much about their music when she bought the record for him.

“From there on I was just entrenched in heavy metal and horror movies,” Taylor said. “The bug for me at a young age was once I got into a movie you want more, you want to feel connected to these things.”

Taylor notes a Venn diagram-like overlap with the audiences and fans of punk, metal and horror movies. He said he’s not even quite sure why the overlap seems so prevalent. Reflecting on the time before the rise of Amazon and E-Bay, Taylor sai going to a video store and looking for a specific horror movie was similar to looking for a Dead Kennedys cassette.

Taylor has done more than collect and sell collectibles, he’s also musically creative. He was in his first band, Face of Decline, at age 15 in the late ’80s back in Sioux Falls, South Dakota. The group had the distinction of being one of the first bands to have a record (7” vinyl) release on Relapse Records, a label known for aggressive metal, primarily death metal and grindcore. Taylor’s current band is the Lawrence-based metal band Hammerlord.

Taylor is of the mind that running a shop like 1313 Mockingbird Lane isn’t all that different from his involvement with underground music.

“I feel my store is very underground,” Taylor declared. “I still make fliers.”

He also thinks a punk rock mentality was found with “The Munsters,” showing the value of differences.

At 3:30 p.m. (with 30 minutes to go until the official start) on the day of the meet and greet, a line of more than 30 people had developed, and by the time the event was all said and done at 7:00 p.m., Taylor had tallied a little over 200 attendees. The line of attendees cut across generational lines, with fans of a variety of ages present.

“The Munsters” original television run was for the span of two years: 1964-1966. In following decades, the show found continued longevity via reruns. Patrick is able to speak about the significance and longevity of the show, one reason he cites is the look of “The Munsters.”

“Back in the old days, every studio had a sort of a specialty: MGM did musicals, 20th Century Fox did disaster movies and Universal did monsters,” Patrick said. “What they did was take all the talent they had from the Dracula, Frankenstein and Wolfman movies and applied it to a sitcom that was produced by the guys who did ‘Leave it to Beaver,’ and they mixed it with the Universal Monsters, and it came out looking like a mini movie, all shot on film. The lighting, the camera angles, everything was really, really top notch, so it looks like a little mini movie, and people remember that.”

Taylor considered the event to be a success and said he didn’t hear any complaints. With one meet and greet complete, Taylor said he’s currently in talks with noted B-movie actors to do future appearances, yet at this point in time, he’s not at liberty to give any names.