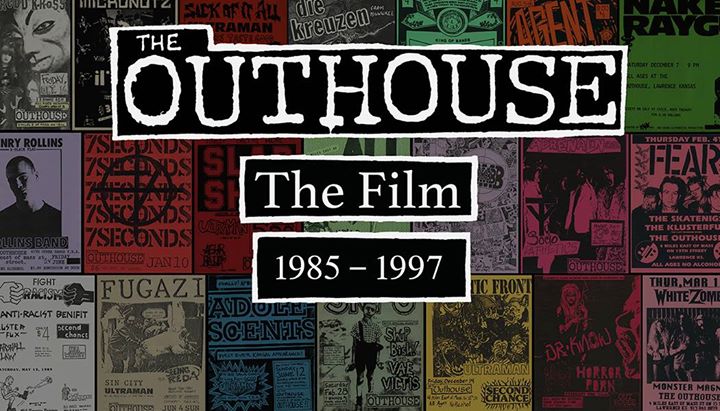 It’s a punk rock/music documentary like no other – the focal point is a punk rock club that was in the middle of a cornfield outside of Lawrence, Kan.

Lawrence differs from the vast majority of Kansas, socially, culturally. It’s a college town. And before The Outhouse had opened its doors to punk, the Dead Kennedys and Black Flag had come through Lawrence in previous years and played the Off-the-Wall Hall and the Lawrence Opera House.

The Outhouse documentary was a project seven years in the making put together by Brad Norman, who played bass in the Kansas City, Mo. punk band Sex Offenders in the ’90s and booked shows at The Outhouse in its final stages as a punk venue in the late ’90s. Later, Norman would attend the University of Kansas in Lawrence, obtaining the skills and knowledge needed to make the movie.

Norman noted that throughout the seven year duration of working on the film he received hate mail from people asking “where’s the movie.” Reasons relating to the lengthy development process can be attributed to cost, the technical aspects of making the film and Norman’s attention to detail.

“I didn’t want to do it the wrong way, I wanted to do it the right way,” Norman proclaimed. “This is my youth.”

In putting together the documentary, Norman was functioning as a filmmaker and archivist, collecting pictures and video footage and transferring them from analog to a digital format.

A lengthy list of punk rock and metal bands, some now revered as legends, played The Outhouse, ranging from Screeching Weasel to Slapshot. In conducting interviews with members of the more big name bands, Norman had to make out of state trips.

Henry Rollins, Ian MacKaye, Angelo Moore and Norwood Fisher of Fishbone, Dave Brockie of GWAR (in his last known interview before his passing in 2014) are in the film.

Nirvana, in1990, and Green Day, in 1992, were at The Outhouse. Neither band is mentioned in the documentary. Norman said the content of each interview is what determined which interview segments made it into the film.

Once the film was complete, with the premiere having taken place in Lawrence at Liberty Hall in October 2017, the movie was shown here and there in select cities, with several showings in a number of Midwest locales, including Kansas City, St. Louis, Wichita, Kan., Des Moines, Iowa, and Springfield, Missouri.

Several screenings also extended to the coasts. San Francisco had a two night run of the movie, as the first night sold out, so another was added.

When Norman speaks about the days of his youth at The Outhouse, a heartfelt connection to and reverence for that place and time is heard in his voice. In 1988, at age 15, while attending Parkville High in Parkville, Mo. a friend of Norman’s, by the name of Louis Todd, brought pictures to school of the happenings at The Outhouse, including the slamdancing and stage diving.

Norman was enamored with the photos

“I thought it was the coolest shit in the world,” he exclaimed.

Those pictures, which were used in the film, served as a passport to another world for Norman. Norman made his way from a “north of the river” suburb to the outskirts of Lawrence and encountered a scene he compares to “Lord of the Flies.”

“It was scary, there’s no street lights, it’s dark out, there’s bonfires blazing. It’s just different. It’s like being stuck on an island, and you don’t know what’s going to happen.” Norman stated.

Norman also spoke of the social mix at The Outhouse, noting it was a place where you could find intellectuals, college kids, rednecks who didn’t give a fuck and people tripping on acid roaming through cornfields.

“The Outhouse was wild,” Norman exclaimed.

Now anyone with Internet access can catch a glimpse of what Norman saw and was a part of.