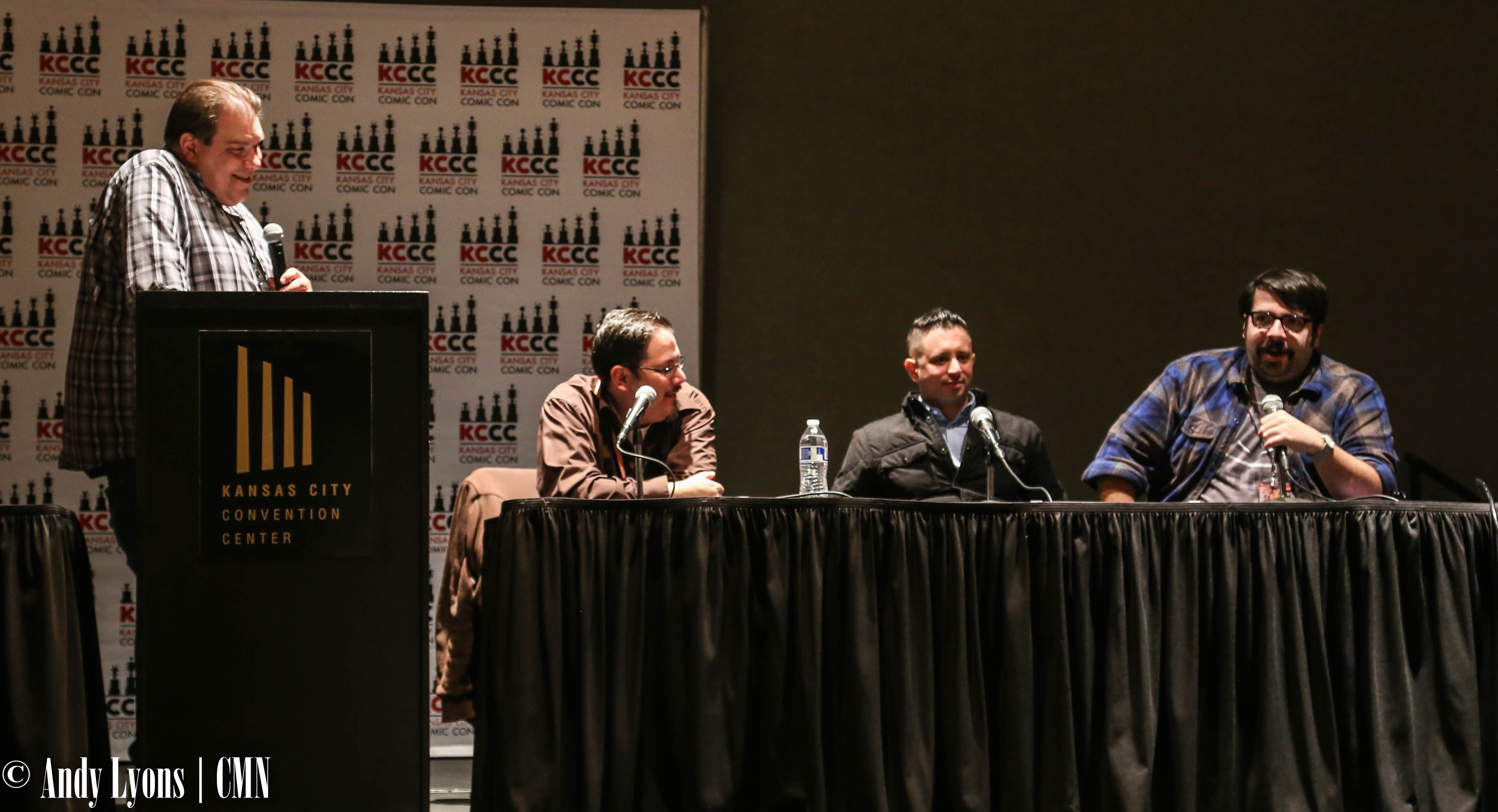 Comic conventions are known for their celebrity guests, but another big draw is the availability of industry professionals such as comic book writers and illustrators. Kansas City Comic Con played host to a score of some of the hottest comic writers in the industry including DC Comics’ Steve Orlando, James Tynion IV and Jai Nitz, who came together for a panel Friday night hosted by Jerry McMullen of the Worst. Comic. Podcast. EVER!

Orlando is known for his work on Justice League of America and Supergirl, Tynion for his work on Batman and Detective Comics, and Nitz is one of the co-creators of the current iteration of El Diablo – one of the main characters in 2016’s “Suicide Squad.”

However, the DC Comics Writers panel didn’t focus too much on what each is currently working on and instead took a look at how each of them got their starts in comics and how they ended up at the legendary DC Comics.

McMullen’s first question was about each writer’s first experience with comics, and each had a trip down memory lane. Tynion’s was via toys in McDonald’s Happy Meals in the early ‘90s, Orlando’s was Tim Burton’s 1989 “Batman” film and the “Swamp Thing” cartoon, and Nitz revealed he was a Marvel kid until “Teen Titans” #16, and other titles that featured writers he was familiar with from Marvel.

Each writer was very candid with the small crowd, and had a back and forth that was really conversational and added to the flow of the panel.
McMullen also asked about how each got their start at DC, which led to some great perspective on getting into the comic industry.

Tynion said he discovered Vertigo comics in high school and it opened a whole new world in comics to him, and looked at the career trajectory of Neil Gaiman as a model to follow. 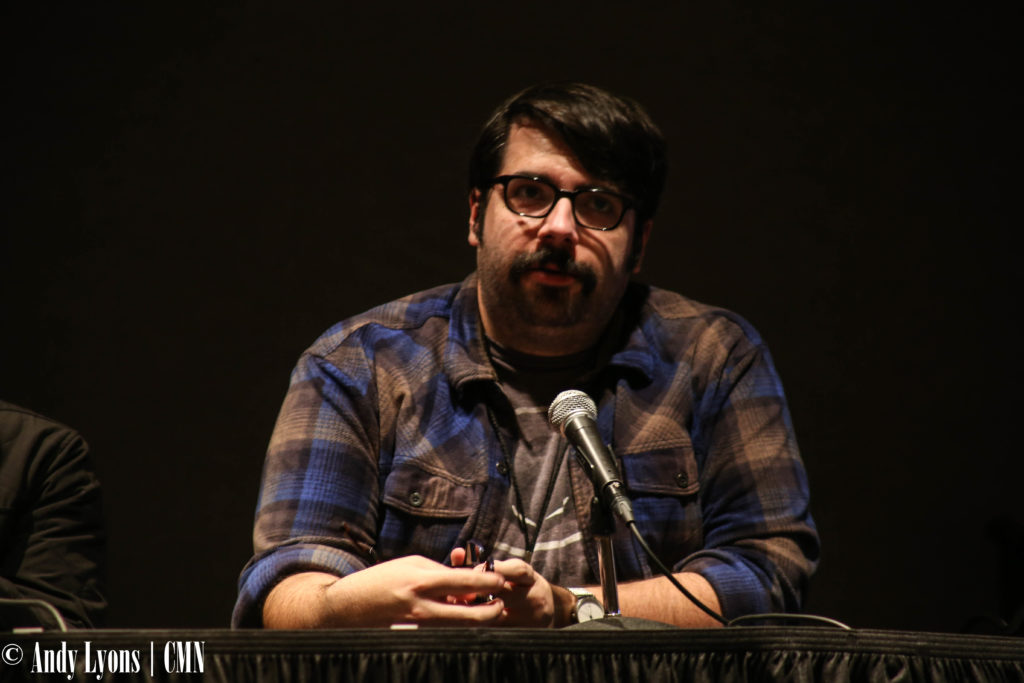 “My sophomore year (at Sarah Lawrence University) I took a creative writing workshop with a little known short story writer named Scott Snyder, and over the course of the semester he had put together the first pitch of American Vampire and he sent it to me because we had spent a lot of time talking about comics and had really hit it off… and I sent him back a 10 page critique of every single thing I thought could be leveled up.”

Tynion said he went on to become Snyder’s writing assistant and then an editorial intern at Vertigo in 2010. After working in advertising, Tynion said he stayed in contact with Snyder and sent submissions to every comic company that had open submissions for new content but it was his connection to Snyder that got him in the door.

When the Batman New 52 series launched DC was looking for additional content in the back of each book and Snyder didn’t have the time to do it all himself so he tapped Tynion to assist with it, so Tynion’s first published DC work came in Batman #8.

Nitz’ path to DC was a bit different than Tynion’s. He was first published in a WildStorm Comics compilation. While looking to break into the industry for about a year and self-publishing a comic he sent it around and ended up getting an opportunity for a two page story in the back of a “Joker: Last Laugh Secret Files” comic being produced by Amanda Conner and Jimmy Palmiotti.

Asked what they liked about working for DC, each talked about the DC universe and the characters involved make it an amazing platform to work from. Tynion and Orlando mentioned working on DC characters gives the writer’s voice a much bigger pedestal for their voice – which means the topics they choose to write about have a bigger reach as they’re channeled through characters such as Superman and Batman versus an unknown independent character.

When asked about how writing is impacted by other mediums, such as DC’s Arrowverse on the CW and the cinematic universe, each writer talked about making the comics worth picking up and using the lack of Hollywood style production budgets to create content that is interesting and potentially bigger scale than the shows and films are capable of under budget restrictions. 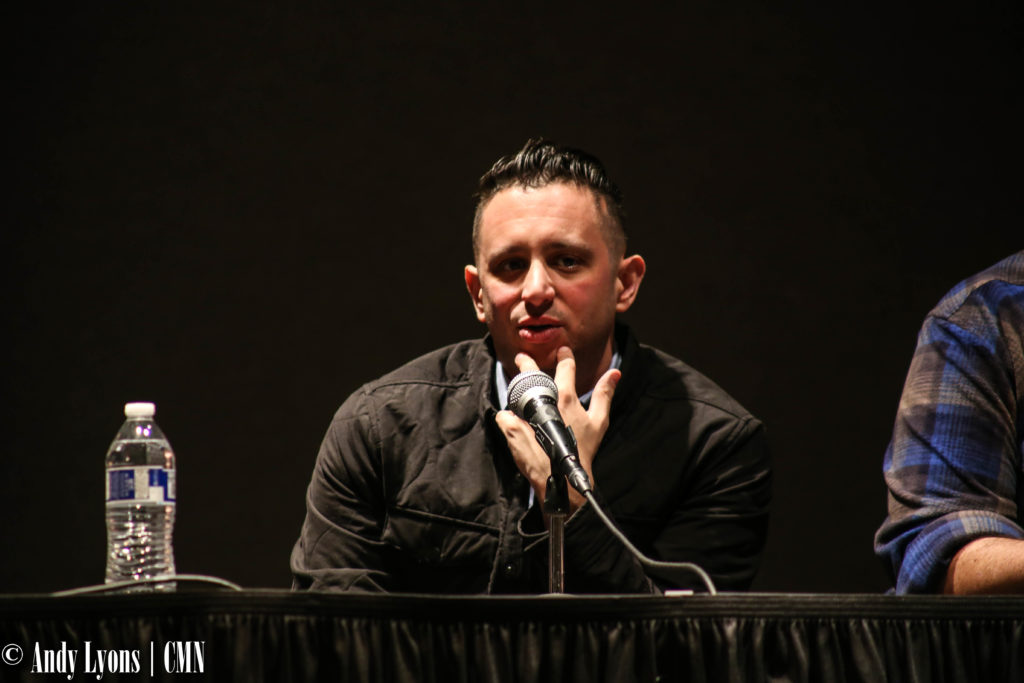 Steve Orlando, who writes the Justice League of America and Supergirl titles for DC Comics, offered great insight into the comic industry Friday night at KCCC.

Orlando explained as comic writers they have little to no interaction or influence on the shows, outside of visiting the set and seeing Supergirl’s apartment.

“I think the interesting thing is, to be honest, the pressure is on us to thus create things you can only get in comics,” Orlando said. “The books James and I are doing next year… the new age of DC heroes, this question is exactly what that’s about… The pressure is on us to create something you can only get in comics and over deliver when you pick that book up and give you something, whether it’s character-wise or scale-wise that you could never get anywhere else. Like what they’re doing with “Metal” would be the most expensive movie that has ever created, like more expensive than Australia.”

“So the pressure is on us to do our job better,” he continued. “Because of how many other avenues there are to get these characters.”

Tynion noted the different avenues, such as multiple versions of Batman through the Lego Batman movie, the DC extended film universe and the “Gotham” TV show so it’s on the writers to make great stories people want to read out of the sea of available stories.

“The pressure is not from Warner Brothers or from DC, it is the pressure we put on ourselves to make the books worth picking up,” Tynion said.

Nitz noted the popularity of El Diablo in the “Suicide Squad” film is the only reason he has a job currently, as he had joked early in the panel about how El Diablo #6 was the worst selling comic of all time. Yet the character’s reception and the film’s success led DC to want to bring the character back and run the series although his editors consistently point out they don’t own the films or any of the subject matter related to the films.

The panel overall gave a great perspective on how difficult it is to break into mainstream comics, and gave fans at KCCC a look at the minds behind some of the most popular comics on the market today.