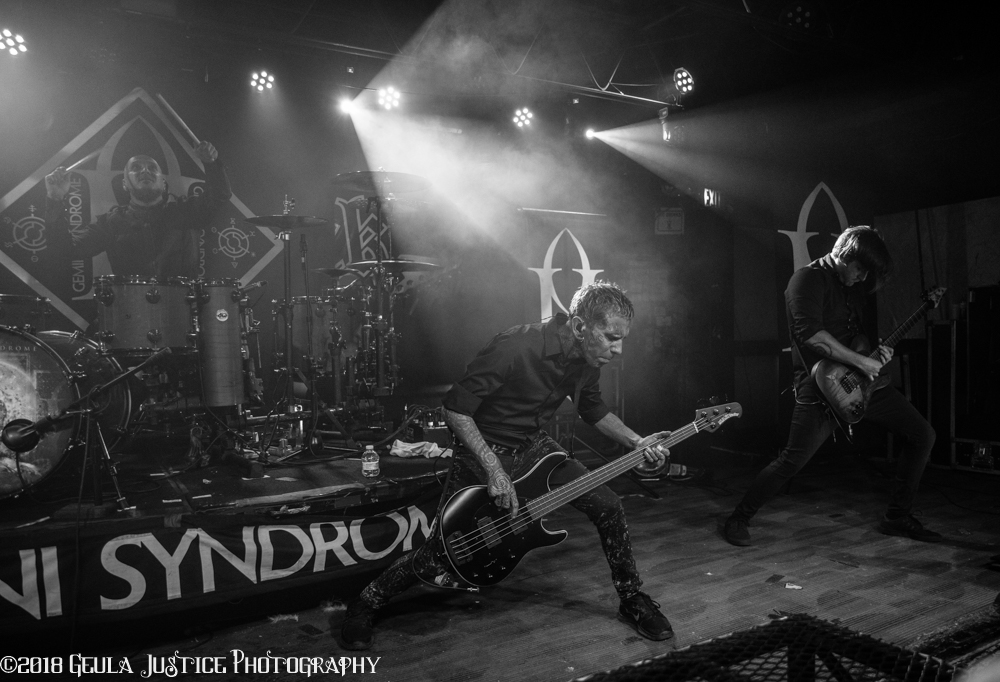 Last week, Guitars Rock N’Country Bar in Joplin, Mo. was home for the night as Gemini Syndrome and Code Red Riot were in town with special guests Take The Day, Sardis, and Xerøs.
Guitars is a newer club showcasing rock, country, and even some red dirt. The venue is filling the gap left by other venues closing in the area and sets a great atmosphere for an intimate show.

Xeros, from Springfield, Mo., kicked off what turned out to be a great show. With their energetic front man and guitar player Jaymes Peralta, Xeros came out to catch the attention of the crowd and make their own place on the stage. Joining Peralta was bassist Nathan Vest, Jason Dawson on guitar and drummer Layton Flatt. They came out hitting the crowd with a good hard rock sound and well written tracks. The group used every second of their short set to show off their sound they were a good pick to start the lineup.

Next on the stage was the Joplin local Sardis, who have been making waves since their debut album in 2014. Sardis is a throwback to the look and styles of the 80’s metal scene and sound while throwing influences of newer sound into the mix. The high octave vocals of Sean Roycraft was a focal point of their sound and played well with the thrashing riffs from guitar player Kevin Hasselquist. Jerry Walker on bass and Josh Harms drums showed that a good rhythm section bring to life a metal band. Despite some technical issues they still poured their hearts out and put on a good performance.

The last of the special guest was Pittsburgh, Kansas’ very own band Take the Day. A hard hitting high energy straight in your face rock band, Take the Day are rocking fresh off their latest release “Matches and Knives” which hit the air in April. The album was co-written, produced, and engineered by Chris Dawson and Jimmy Beattie of Seasons After. Take the Day bring a great, refreshing sound from start to finish. The powerful and heavy shreds of the twin guitars of Adam Easom and JD Sneed were a perfect match for Kenneth Black’s strong and clean vocals that he pulls from a place of deep emotion and passion – not to be outdone are the enormous thumps from bass player Rick Harrington and the precision beats of Matt Circle. Take the Day are definitely a band to keep an eye on as they have already toured in support of some big acts and rock with every bit of energy available and have the tracks and sound to make a big dent in music.

A 2017 brain child and outlet for former member of Otherwise Corky Gainsford, Code Red Riot bring a mix of the nu-metal, hip hop meets rock, and soothing vocals – a sound that the best of the genre was able to master. Not to be held to that sound they also bring a heart filled, blood and guts rock sound in their arsenal. Gainsford comes out swinging in an infectious show and gets the crowd behind him and his band. Tyler “Taz” Azure is the riff melting, axe-wielding madman of the band and plays along great with wizard of Woz on bass. They are an explosive band with a high energy show that perfectly highlights their sound and passion. You can see the demons being eradicated and feel the wounds being healed as they pour every bit of soul into a fast paced tight performance. Immediately making new fans with sure to be hits like “Living Low,” “Panic and Pain,” and “Killing the Kings,” Code Red Riot are a band to make sure and catch before they break it big time.

Closing out the night was main headliner, fan favorite, Gemini Syndrome. A seasoned band, having formed in 2010, the L.A.-based Gemini Syndrome has earned great success with their two full album releases, 2013’s debut album “Lux” and 2016’s “Memento Mori.” Both brought forth several hits and bred the fan base now known as the “Synners.”

Knowing what their fans want they played their hits, songs like “Pleasure and Pain,” “Remember We Die'” and “Stardust” had the crowd rocking as they sounded album quality.

Sporting shaved heads, vocalist Aaron Nordstrom and bassist Alessandro Paveri together offer a look and sound that bring a very spiritual feel to the show. Adding to that feeling the thunderous, earth moving beats of drummer Brian Steele Medina. Not to be out shadowed was guitarist Meegs Rascon, who has a style and sound the just brings to life the Gemini sound. Together they put on a fantastic, crowd jamming, soul touching show with a strong energy and passion that will touch you in the feels.

Gemini Syndrome offered a very special acoustic, after show, VIP performance and meet and greet. Fans were very honored and fortunate enough to be invited to the intimate interaction with the band. I cannot recommend this experience enough. You get to sit down for a very special acoustic jam session with the band that will move you and prove they belong on the big stage. After which you get pictures and your chance to thank the band for their music. A special thank you to Gemini and Brian Medina for the chance to enjoy it. All around a great show put on by SoundWaveMo and Guitars Rock N’ Country Bar. Make sure and catch Gemini Syndrome and Code Red Riot together on tour.