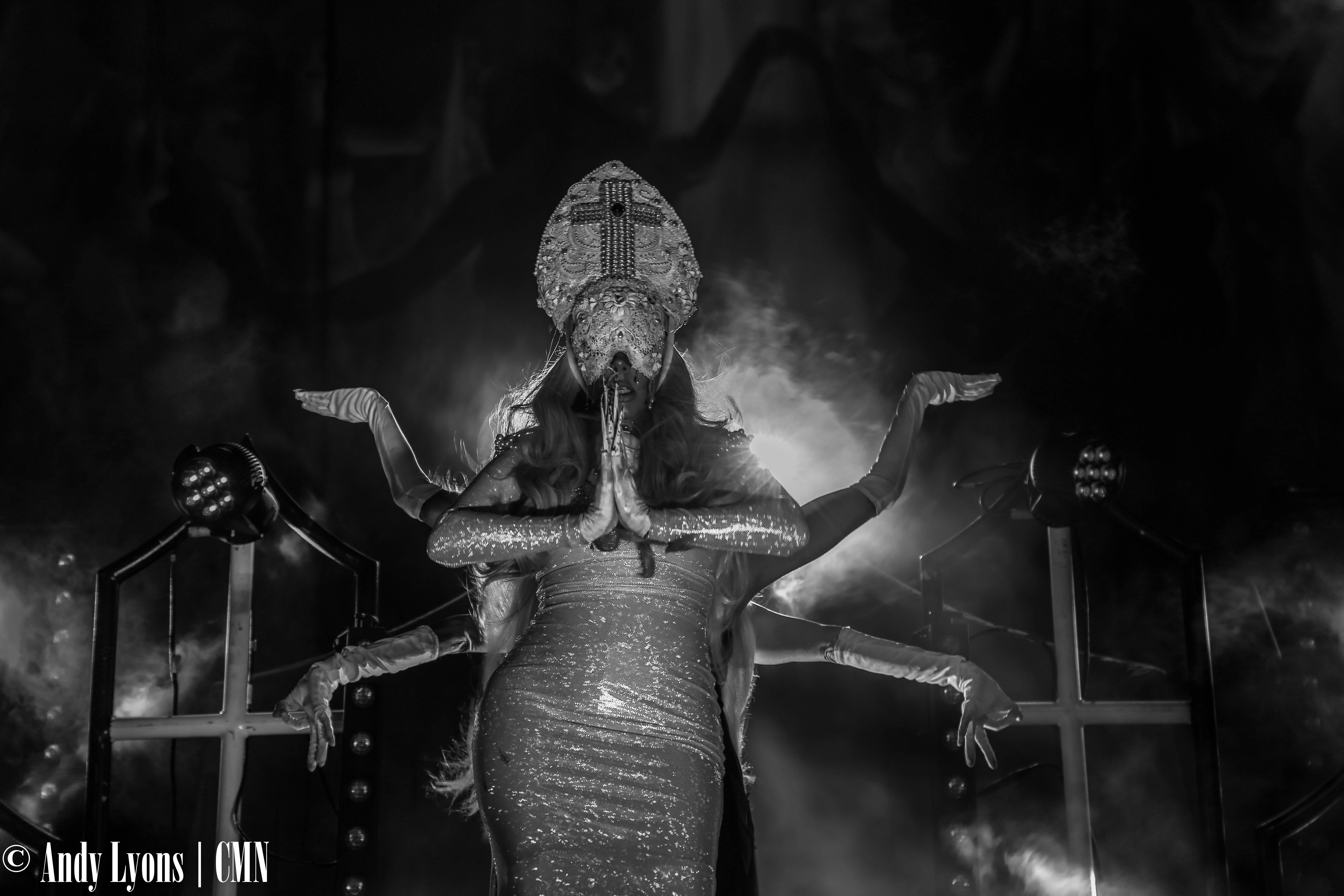 Even with a 7 p.m. start time, a line was already wrapped around the block early Wednesday afternoon at the Arvest Bank Theatre at the Midland in Kansas City, Mo. Those in line were anxiously waiting for the Half God Half Devil Tour, primed to melt faces. The tour, featuring Gemini Syndrome, Avatar, Motionless in White, and headliner In This Moment, has been selling out venues across the country since kicking off last week in Milwaukee.

The show went full bore from the time Gemini Syndrome opened until In This Moment took its final bow close to midnight, a primal outlet full of moshing and crowd surfing – at least one fan left with a head injury that required stitches – but overall the show held the positivity and good vibes In This Moment is known for.

Gemini Syndrome and Avatar both played shorter sets, but used their time slots to hit the ground running. Swedish rockers Avatar came out with a carnival theme to their stage setup and outfits, with frontman Johannes Eckerström’s clown-painted face quickly becoming one of the most recognizable in metal. Both groups came out with high energy and really set the tone for the rest of the night.

Motionless in White was hands down the hardest hitting group of the night. Their setlist was dotted with fan favorites and some new material for their upcoming album, “Graveyard Shift.” The intensity could be felt at the bar at the back of the Midland, with scores of fans moshing in front and crowdsurfers lining the top of the crowd.

About halfway through their set, lead singer Chris Motionless invited a long-time fan who had traveled the country to see the band to the stage. A young man dressed as Waldo came out and thanked the band for great memories and then dropped to one knee and asked his girlfriend to marry him. She said “yes” in spectacular fashion, in what was probably a first for many fans.

During an interview with Chris Howorth in late 2013, he mentioned In This Moment was focusing on the show, the production, and shifting from the standard singer in front of the microphone with the band around them to a full show – comparing the group’s plans to those of Alice Cooper. As such, the band’s theatrics over the past four years or so have been top notch, with lead singer Maria Brink making multiple outfit changes with the songs, stage props, and backup dancers.

Their set has a lot of ups and downs, ranging from heavy-hitting songs such as “Adrenalize” to slower, more melodic tracks like “The Fighter.” There are planned breaks where Brink talks to the crowd and each band member gets a solo in what is one of the most complete shows in rock.

With this tour, In This Moment has three new songs for an upcoming album (no details announced yet), which includes a cover of the famous Phil Collins track “In the Air Tonight.”

With the tour’s start in early spring, the Half God Half Devil Tour is setting the bar high for the 2017 concert season.

Be sure to like Central Mo News on Facebook, and view our extended gallery with more than 100 photos from the show.