LATEST NEWS
05:53 AM
Home Entertainment Concert In This Moment’s ‘The Witching Hour Tour’ comes to a close at Kansas City’s Voodoo Lounge 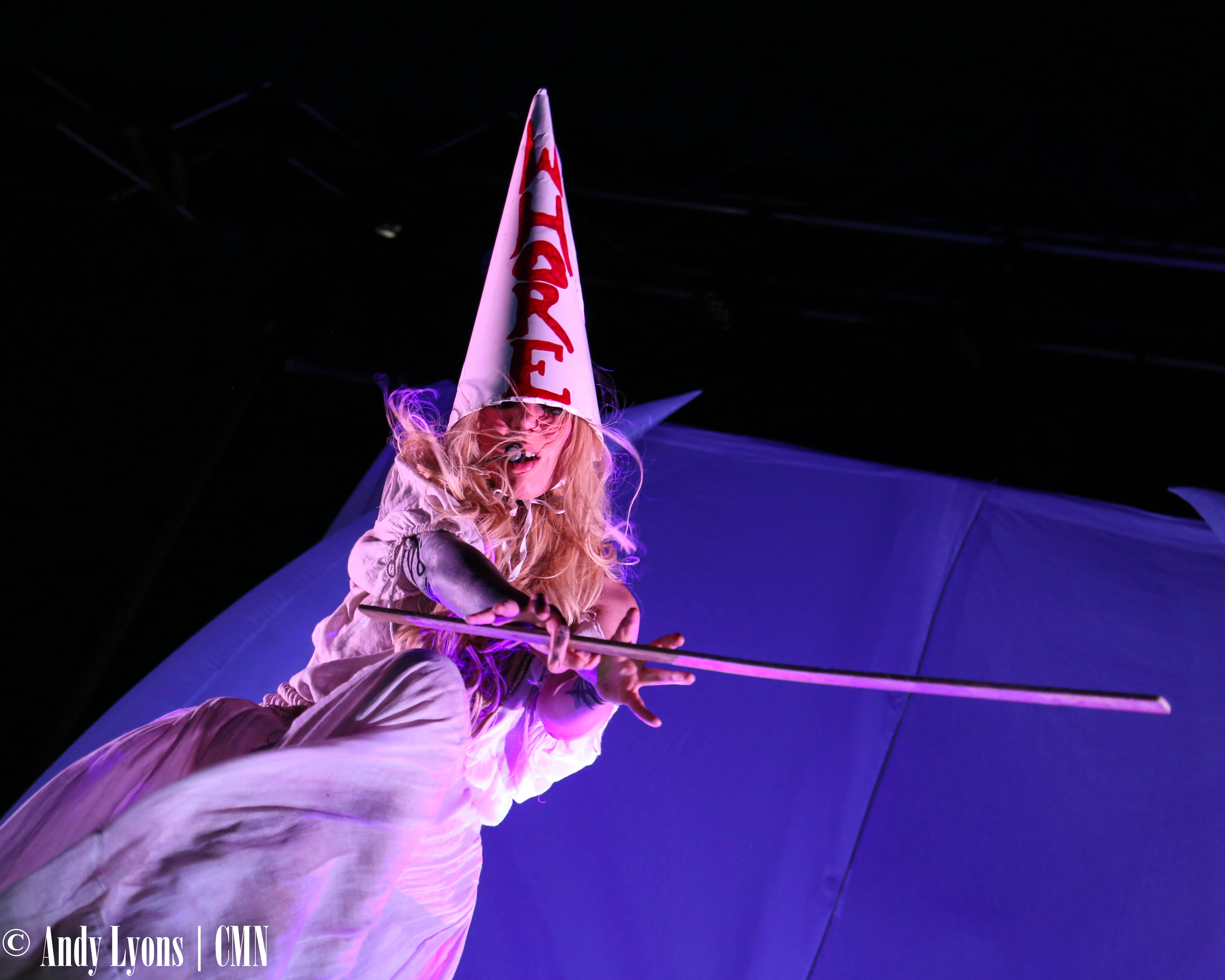 Saturday, Feb. 17, The Witching Hour Tour put a spell on the Voodoo Lounge at Harrah’s Casino in Kansas City. The sold-out crowd was bewitched by the mesmerizing lineup that included DED, New Years Day, P.O.D, and headliner In This Moment. The Witching Hour Tour, like its predecessors Half God Half Devil, and HellPop are no strangers to sell-outs as In This Moment’s popularity has grown exponentially with every tour.

The mesmerizing night kicked off with opener DED, an amazing Arizona band still riding high on their July 2017 debut album, “Misanthrope.” With hits like “Anti Everything” and the newly released video for “Hate Me,” it’s no surprise DED has been on some of the biggest tours this winter, where they belong. Fresh off their appearance on Shiprocked, they joined the Witching Hour Tour and have been whipping fans into a frenzy every night as a perfect kick off.

They have become synonymous for their ghostly white eyes and high energy shows, led by vocalist Joe Cotela, and were perfect at setting the tone with a high-impact show. Guitarist David Ludlow and bassist Kyle Koelsch are perfect wingmen and are very entertaining and interactive with the crowd to the point you’ll find Ludlow singing right along with the front row, jamming to his band as much as jamming with his band.

Drummer Matt Reinhard is a monster on the back line. I have no doubt he would give the same extreme passion on that kit whether he was in front of 50,000 fans or just 50. Reinhard’s beats feed the take-control-of-the-crowd style of Cotela and all have no problem getting the crowd moving.

More evidence of their showmanship and talent was shown as both singers of the headliners could be seen rocking on the side of the stage and bouncing to the beats. With future dates accompanying P.O.D. and an invite to Northern Invasion, DED is a must-see as they are sure to be headlining next year. 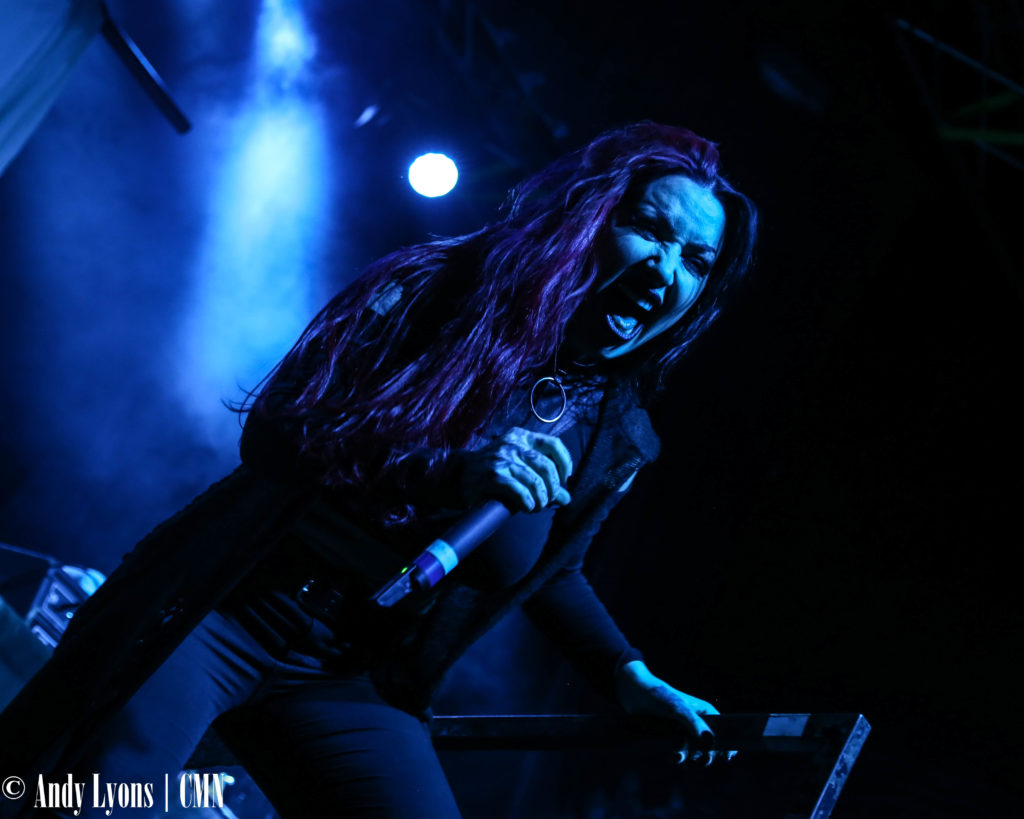 Gracing the stage next was the alluring and hypnotizing vocals of Ash Costello with New Years Day. She is an artist with a style and sound all her own. Having gone through many lineup changes since their inception in 2005, there is no doubt Costello’s energy and passion is a big part of holding the band together and propelling New Years Day to the next level.

Their performance with the band in cloaks had an obvious dark but beautiful, heartfelt and enthusiastic tone that got the crowd of fans new and old involved and excited. It is no surprise, after enjoying their show, to see they were invited to join Halestorm, Stitched Up Heart and In This Moment on tour later this spring. With their haunting, heart-moving sound, Costello and New Years Day are a perfect addition to any lineup and have no problem getting the crowd engaged and rocking.

As if that wasn’t enough to get a crowd ready for a headliner, next to take over the stage was L.A.-based P.O.D. The group consists of singer Sonny Sandoval, guitarist Marcos Curiel, Traa Daniels on bass and Wuv Bernardo on drums.

P.O.D. have been rocking the stage with their faith-infused, passion-filled, funk-metal style since the early ‘90s. They haven’t lost a step to any new bands as they hit the stage with a style best described as aggressive hip-hop mixed with metal. Having sold more than 10 million albums in their career, they are professionals and it shows. Giving the fans what they know they want, P.O.D. makes sure to rock their hits, including “Southtown,” “Alive,” “Youth of the Nation” and “Goodbye For Now.” Sandoval and the guys give off a great positive energy in their funky metal show that leaves you feeling properly fulfilled from a long-term headline band.

The time had finally come for the headline band that brought us all together: the larger-than-life and ever-evolving L.A.-based In This Moment. Formed in 2007 by lead guitar player Chris Howorth and singer Maria Brink, they are joined on stage by long-time bass player and “Faceless Freak” Travis Johnson, early “Blood” album-era veteran guitar player and “War Machine” Randy Weitzel, and newest member drummer Kent Diimmel. 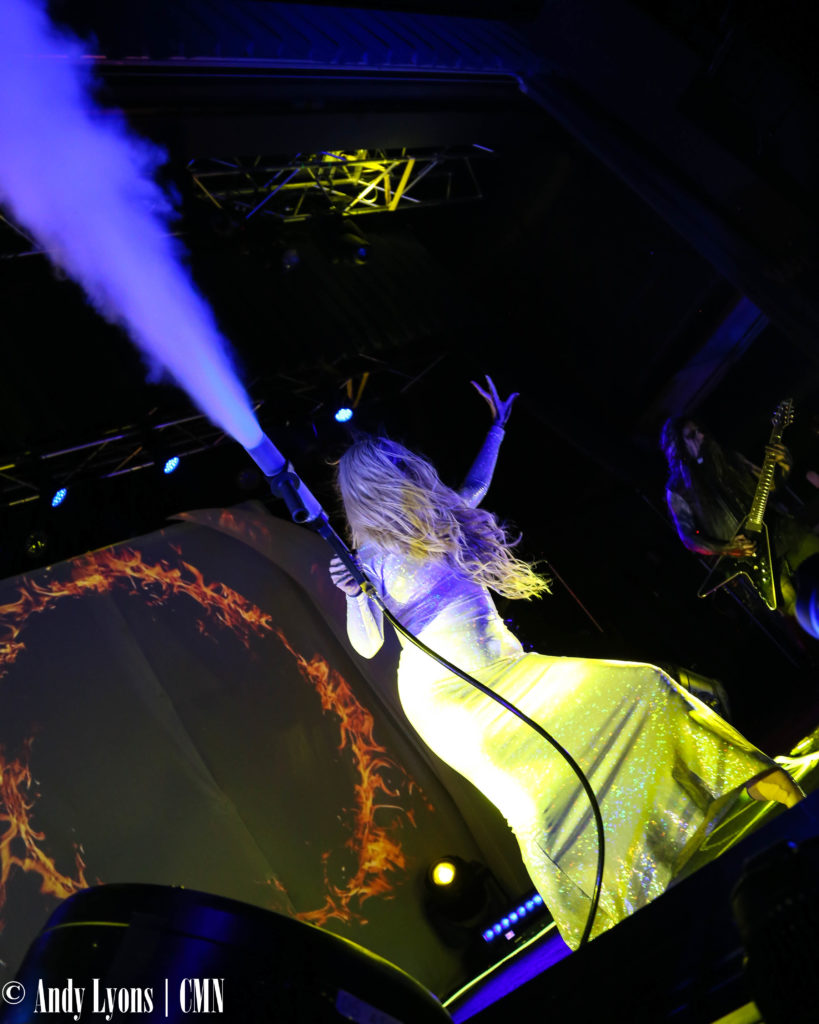 Maria Brink of In This Moment

Still riding the wave of success from 2017’s “Ritual,” Brink proves with the newest incarnation of their show that her vision is limitless with imagination and beauty.
As the curtain opened, diehard fans noticed a stripped-down stage compared to what they might be used to. Brink, who formerly went as “Ms. Widow” for the stage show, is now “Mother Maria” and has forgone her big triple-level stage for a carpet highlighted by a ring and a star that become an integral part of her vision.

As the band took the stage in their high priest of the “Ritual” look, behind ceremonial masks and statuesque poses, Brink joins them on stage. Her blood goddesses flank her for their only appearance and she begins her show. In front of what becomes a screen of images and colors framed by the horns of grace, Mother Maria brings forth a totally different look to songs like “Burn,” “Adrenalize” and their opener, “Blood.” Brink takes fans on an all-new ride through tracks “River of Fire,” “Lay your Gun Down” and the crowd-favorite “Roots.”

Along with the brutal shreds of the dueling guitars, soul-thumping bass and heart-shattering drums, the addition of the screen acts as a new member of the group. Helping tell a story with her music, it flashes videos from past videos and visions surely seen in Brink’s dreams. It gives a new level of grabbing the crowd and bringing them into the story.

In This Moment brought back a fan-favorite by adding “Big Bad Wolf” to the setlist while making sure to do justice to the Phil Collins classic “In The Air Tonight.”

Reaching a different range with songs “Sick Like Me,” and closing their set with the powerful “Oh Lord,” the crowd was not only thoroughly rocked, but visually moved by the tale Mother Maria and In This Moment honored us in sharing.

Feeling the crowd wasn’t ready to end the night, Brink teased with the question, “What do you need Kansas City?” whipping the crowd into a frenzy before the band joined Brink on stage one more time for their hit “W.H.O.R.E.” Brink sat upon her stool in her trademark “WHORE” hat and led the crowd through their encore as balloons fell.

Maria Brink’s vision, inspiration and guidance from the band have led to an all-new level of reaching fans and touching their soul.

The Witching Hour Tour was a great combination of different styles, levels of popularity, and sub-genres, bringing together fans and bands that might not have ever thought to work together.

Check out our extended gallery from the show by following Central Mo News on Facebook here.