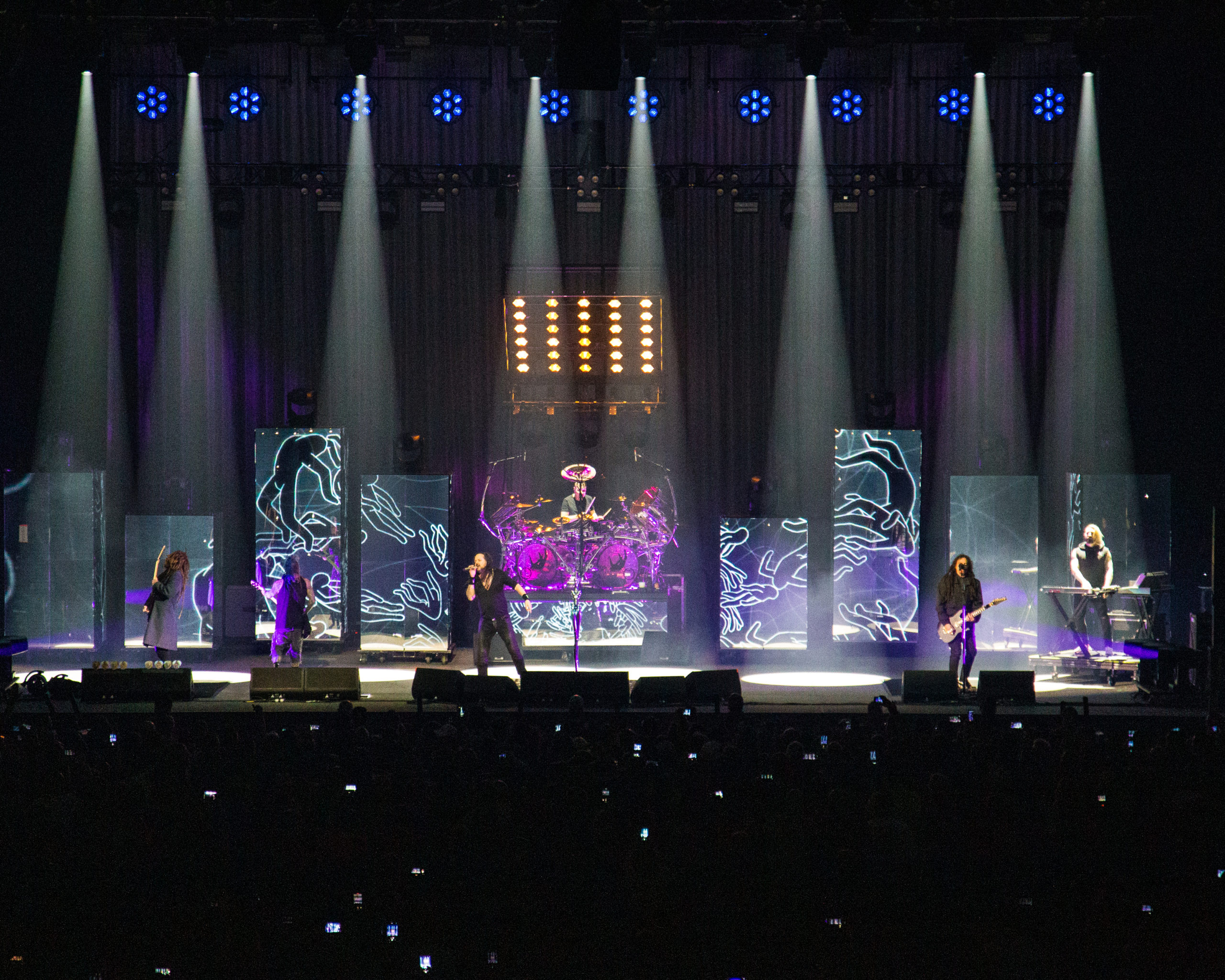 It takes a lot for a rock band to reach legendary status. Record sales and sold out shows are the easiest way to track it. For some, it’s longevity. Korn has hit all three, still packing stadiums and with last fall’s “The Nothing” debuting at number 8 on the U.S. Billboard 200, the group has proven themselves as mainstays in the rock genre.

The group started with dark vocals and taboo topics over downtuned guitars and thundering bass, and has evolved – as has their fan base. “The Nothing” was therapeutic for lead singer Jonathan Davis after the deaths of his wife, Deven, and his mother, and those tracks are some of the heaviest and authentic Korn has released in their 13-album catalog.

The group’s winter tour will see them hit 24 cities with Breaking Benjamin and Bones UK, packing stadiums nationwide. The tour hit JQH Arena in Springfield, Mo., last Thursday for a full house. The home of the Missouri State University basketball teams was transformed into a dimly lit house of metal for the night, with fans holding nothing back singing along.

Korn’s rise to the forefront came in the late ‘90s when their third album, “Follow the Leader,” peaked at number 1 on the U.S. Billboard 200 and the album’s iconic videos brought them to number 1 on MTV’s “TRL.” It makes sense they include tracks from the album in their set, including “Freak on a Leash” as the song before they walk off before the encore.

The anthems that millions of teenagers sang more than 20 years ago they are still singing as adults, many who brought children to catch the Springfield show. Fans traveled from far and wide including a couple on the rail who traveled more than eight hours from Texas because it was the only show that fit their schedules.

The stage set for Korn was the same as their previous tour with Alice in Chains, in that they had funhouse mirrors setup across the stage that doubled as screens, sometimes showing distorted images of the players in front of them and other times different images or lights. It really gave the show a funhouse on acid type of vibe.

On top of Davis’ gravelly vocals, the guitarwork of James “Munky” Shaffer and Brian “Head” Welch always plays a prominent role in the Korn set. As much as it could be a duel, the real winners are the fans who witness two rock gods behind the axe every time the pair is on stage.

Korn came out for their encore with a haunting edition of “4 U,” a fan favorite track that includes a big breakdown. Davis worked the crowd like the seasoned vet he is by holding his hands up, thumbs to the center, and teetering them up and down based on how loud the crowd was while drummer Ray Luzier smashed the cymbals in crescendo with the crowd.

As the night went on the crowd got louder and louder, competing with Davis for who had the louder vocals. Fans went wild until the very end, a huge mosh pit going as streamers shot into the crowd during closing track “Falling Away From Me.” As Korn finished, Davis wished everyone a safe and incredible night and the group spent nearly 10 minutes waving and tossing guitar picks and drumsticks to the crowd.

Breaking Benjamin got the singalong started early. They kicked their set off with “The Diary of Jane.” The group was heavier live than their singles let on, with frontman Benjamin Burnley and bassist Aaron Bruch lending some heavy vocals to the mix.

Burnley had the crowd singing and fist pumping and well lubricated for the rest of the night. The visuals were fantastic and the crowd was ready to let loose heading into a three-day weekend.

Openers Bones UK had the crowd on their heels from their first note. The duo of vocalist Rosie Bones and guitarist Carmen Vandenberg didn’t hold anything back, and within the first couple of songs the crowd went wild. The group went all out and a cover of “Helter Skelter” really got the crowd behind them.

The show was a great way to kick the winter funk that tends to creep in every year. Concert season slows down with the holidays and having a legendary band like Korn come to town with powerful openers in Breaking Benjamin and Bones UK is the perfect show to power through the rest of the winter.