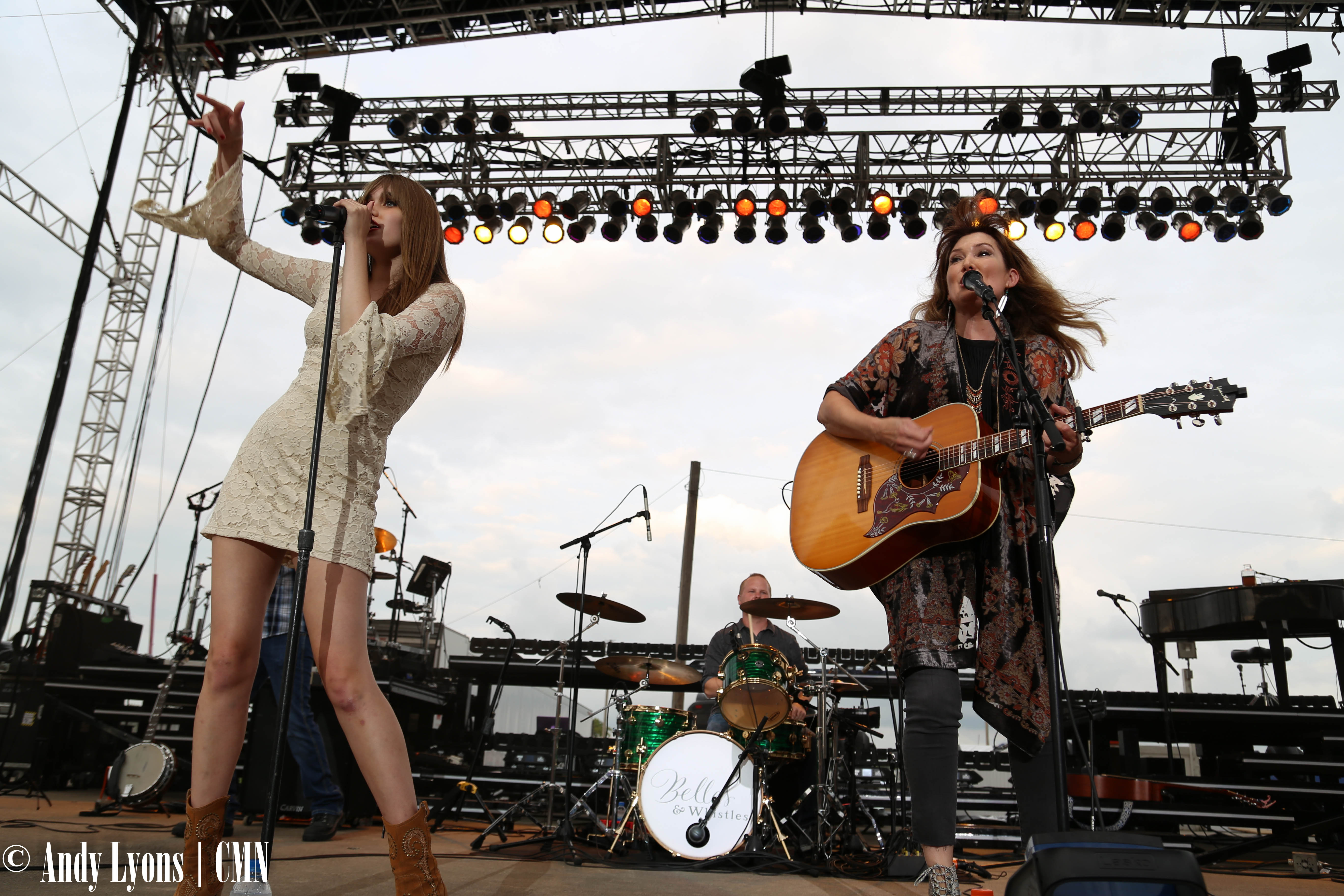 With new EP on the way, Belles & Whistles return to Missouri State Fair

In the year since they last played the Missouri State Fair, mother-daughter duo Belles & Whistles has been hard at work. Commuting from their home in Nebraska to Nashville to work with some of the biggest and brightest names in country music, the duo is set to release a new EP next month.

The EP is titled “Look Up” and set to release Sept. 23. The duo is hosting a CD release party at Bushwackers in Omaha, Neb. Sept. 23. CMN had the opportunity to interview the duo before their set Friday at the Missouri State Fair, and they gave an inside look at the process behind creating their latest effort.

Kelli Jones, the younger of the pair, talked about how star-struck she was when she found out who she had been working with in the studio.

Jaymie, Kelli’s mother, said it is inspiring to work with writers who had worked on songs with Eric Church and specifically Blake Shelton’s “Lonely Tonight.”

The duo sets themselves apart from other contemporary country artists because the inspirations for their songs come from within. Different situations in their lives give a backdrop for the majority of their songs. Kelli talked about the EP’s title track, “Look Up.”

“We wrote that with this guy named Bruce Wallace and we wrote it at like 10 o’clock at night,” she said. “My aunt just adopted a little girl from China and she was abandoned by her family and grew up in an orphanage. She’s 3 and now she’s living here in Omaha and living this amazing life and she’s always so happy and so positive. We told Bruce about that, what was going on in our lives because she had just gotten back from China.

“He was so interested in it and then we wrote this song ‘Look Up’ and it’s kind of just about how no matter where you are, where you begin in life you can get so far. I think that was by far my favorite song I’ve ever written. And no one has really even heard it – we just got the mixes back. I’m so excited about that song because it is so real. We didn’t even plan on writing that at all, we went into the session, ‘let’s write something up-tempo’ and then we came out with this heartfelt, almost ballad.”

Jaymie added the details of another song that’s very personal, which in turn created a music video based on Kelli’s personality and experiences.

“Another song that’s autobiographical is ‘I’m Wild’ that we’re opening our show with,” she said. “We just did a video with the Nebraska Project for this song we wrote also with Bruce Wallace. So the Nebraska Project is this Pulitzer Prize-winning photojournalist named Bill Frakes and he makes videos about Nebraska because he’s from Nebraska. I’ve seen some of the videos he’s done and I sent him three songs and asked if he’d be interested in doing a video with us. He wrote back about a week later and he was like, ‘I like your stuff, yes I would, I’m going to be in Nebraska in like three weeks, let’s do two.’ We did ‘Luna Blue’ and ‘I’m Wild’ and they turned out so amazing. We’re so blessed because we all contributed our time and he contributed his time and talent and it was such a cool experience. We wrote the song with Bruce and that song’s about Kelli, Kelli’s life.”

As the duo opened for country star Brett Eldredge at the Fair, they truly exemplified true musicians. The energy the two have on stage is heartwarming. Visible in the way they interact with each other and smile as they perform, the love resonates with anyone watching. The crowd was receptive as well – many in the track section of the Pepsi Grandstand were singing along to the originals. While half of their setlist was covers, the crowd really responded and got moving to songs such as “Goodbye Earl” by the Dixie Chicks, “Hell on Heels” by Pistol Annies, and “Man I Feel Like a Woman” by Shania Twain.

The pair is focused on the upcoming EP, with another trip to Nashville planned for later this month to finish writing and recording ahead of next month’s release.

Follow Belles & Whistles on Facebook here. Full audio of the interview with Jaymie and Kelli can be heard below.