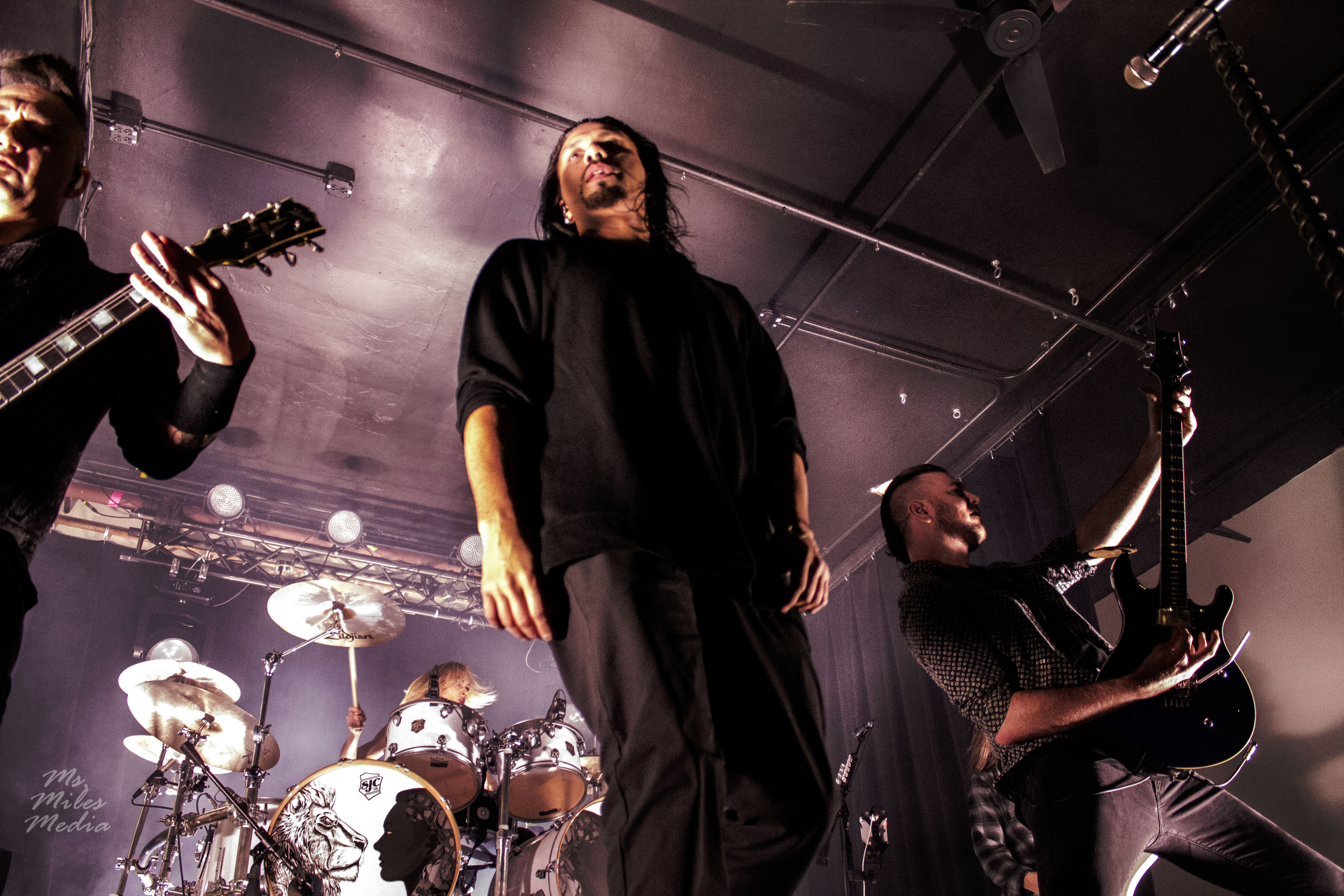 For most people, Feb. 14 was Valentine’s Day but for The Complex in Springfield, Mo., it was Pop Evil Day. What better way to celebrate than with locals and bands you love on a day set aside for it. Pop Evil brought along the music of Them Evils and, in a twist of lineups, the comedy stylings of That Metal Show’s Don Jamieson with a special invite extended to local rockstars B.I.V.

A melodic heavy metal band born in Springfield, B.I.V (Born in Violence) has already gained a strong fan base especially since their self-titled 2017 EP release. B.I.V is quickly learning the struggle of keeping a band family together with several lineup changes already under their belt, but with the heart and determination of frontman/guitar player/radio DJ Baden Page, they have also proved that fortitude pays off. The core of B.I.V consists of Justin Flood on guitar, Dru Rohlman on drums, and Sarah Cornell on keyboards/synths with newest member and bass player Nile Bear.

Opening a show is never an easy task and despite a few technical hiccups early in the set B.I.V showed they are perfect for the task, wasting no time giving fans an early and easy reason to jam. They offered fan favorite tracks “S.H.E.,” “Liberated,” “Tether” and their epic cover of Killswitch Engage’s “End of Heartache.” Fans showed their appreciation with horns and hair flying as B.I.V broke out a new track, “To What End.”

B.I.V brought a great energy and excitement in a solid support spot, riding the high of their latest video, “Teether,” and the recent announcement of their invite to giant Oklahoma festival Rocklahoma.

Following in support was the Huntington Beach-based bad boys Them Evils. The band was an idea born of high school mates Jordan Griffin (guitars/vocals) and Jake Massanari (bass) and their “nocturnal living” in Las Vegas. Them Evils was cemented with the meeting of David Delaney ll (drums) after their 2013 move to the sunshine state.

After their first self-titled EP release and “Rollin’ Stoned and Livin’ Free” release in 2016, they garnered attention from Zakk Wyld followed by an invite to support Zakk Sabbath in 2017. Plus with their success of “She’s Got Nothing,” a No. 22 track on active rock radio, it’s easy to see why Them Evils made the bill.

The group is forged from influences such as Queens of the Stone Age, AC/DC and Led Zeppelin, and while sculpting out their own sound and genre, Them Evils looks to have an explosive year in 2019.

Them Evils commanded the stage Thursday and brought downright explosive energy from start to finish, bringing down the house with “She Ain’t Got Nothin,'” “Practice What You Preach” and a cover of AC/DC’s “Dirty Deeds Done Dirt Cheap.”

With the attention-grabbing antics of Massanari, Them Evils is like nothing you’ve experienced before. It’s an energy and style almost too big for the Complex stage as proven by Massanari’s venture into the balcony to jam with fans. Not to be outdone, there are also the crazy riffs and soothing vocals of Griffin and unbelievably catchy beats of Delaney. Them Evils is the definition of a fun show and you can’t help but jam and dance to their music.

Next on the stage was a well-talked about comedy twist to a usual rock lineup, former That Metal Show host and comedian Don Jamieson.

“It’s my band, my tour and I like him,” Leigh Kakaty, frontman for Pop Evil, said of his choice to bring along a comedic tourmate.

For fans of That Metal Show, expectations were high but unfortunately, while his personality seemed cool and likable, his routine fell a little short for a somewhat bewildered audience. Maybe if he was earlier in the lineup it might make for a smoother transition. Jamieson had no problem owning his set and getting laughs, but not the laughs he would get in a comedy room. He did make the effort to hang out and shoot the breeze with fans.

Last to take the stage was the reason most were in attendance: powerhouse, 16-year rock veterans Pop Evil.

A long way from their start in North Muskegon, Michigan, and almost a complete lineup difference, Pop Evil is still riding higher than ever with the success of their 2018 self-titled fifth studio release. With hit tracks “Waking Lions,” “A Crime to Remember” and “Waking Lions” off the album, Pop Evil showed they have no desire to slow down. Knowing their fans, Pop Evil made sure to play the favorites from “Ways to Get High,” “Footsteps,” “Take it All” and, of course, the way-back original Pop Evil fans’ jam, “100 and 55.”

Pop Evil is a family band and it shows on stage with the interaction and antics of members and riff doctors Davey Grahs and Nick Fueling, the hair-flinging master of the bass and charity-driven Matt Derrito, and one of the most fun and talented drummers to experience live Ms. Haley Cramer.

Pop Evil has mastered its performance, always giving the fans what they want with good interaction and high-energy entertainment. Even despite getting over a cold, frontman Leigh Kakaty didn’t hold back and rocked the house. Kakaty even joined fans and local radio station Q102 at Tommy Hawks axe throwing for an early afternoon of Paul Bunyan-style play time before the show.

It was a fantastic show that ended with the jam all of jam sessions as Kakaty invited Them Evils and Jamieson on stage for their final encore and one of their biggest hits, “Trenches.” A perfect way to end the night and a highlight for those lucky enough to experience it.