Cosplay is an essential element of fandom conventions.

The dedication and creativity of those who will take comic book, sci-fi and fantasy creations and bring them to life is something to marvel at. I approached coverage of cosplay from the point of view of someone who isn’t directly involved in cosplay but has a desire to understand it.

When I met Ron “Panda” Coleman, in 2016, I was introduced to cosplay as more than a creative outlet to dress up as superheroes. He uses cosplay for philanthropic, charity work, with Children’s Mercy Hospital, as well as other organizations.

Displaying another side of cosplay at the Stealth Con 2018 was the public debut of Cosplay For Hope, a nascent organization focused on issues of mental health and suicide prevention. A panel was presented on the subject at Stealth Con 2018, led by April Roller. She said she doesn’t have the money to dive into cosplay like she would like to but attends a lot of conventions and is a fan of the television show “Supernatural” and “Harry Potter.”

The impetus or the creation of Cosplay for Hope did not come from an outside observation on her part. A tragedy encroached upon her life in August of 2013 when her then husband Jeremy Roller committed suicide, leaving her a widow and single mother of three children.

“Didn’t quite know what to do because I didn’t quite know what mental health was and suicide prevention was, and I discovered, even more on a greater scale, fandoms,” Roller said. “Jared Padalecki who is Sam Winchester (on the show “Supernatural”) actually came out with his own personal struggles dealing with mental health, and that kind of normalized mental health for me, as well as our children, so when, when our fandoms took that up and started helping other people and saying ‘hey, it’s okay to not be okay, and you’re not alone, always keep fighting’ and all of these different things that the “Super Natural” fandom was doing , I dove even further into and realized, oh we are not alone.”

Helping April on the panel, presenting the message of Cosplay for Hope were Coleman, Erica Williams, board member of the American Foundation for Suicide Prevention and a cosplayer identified as Megan who is also a licensed therapist. 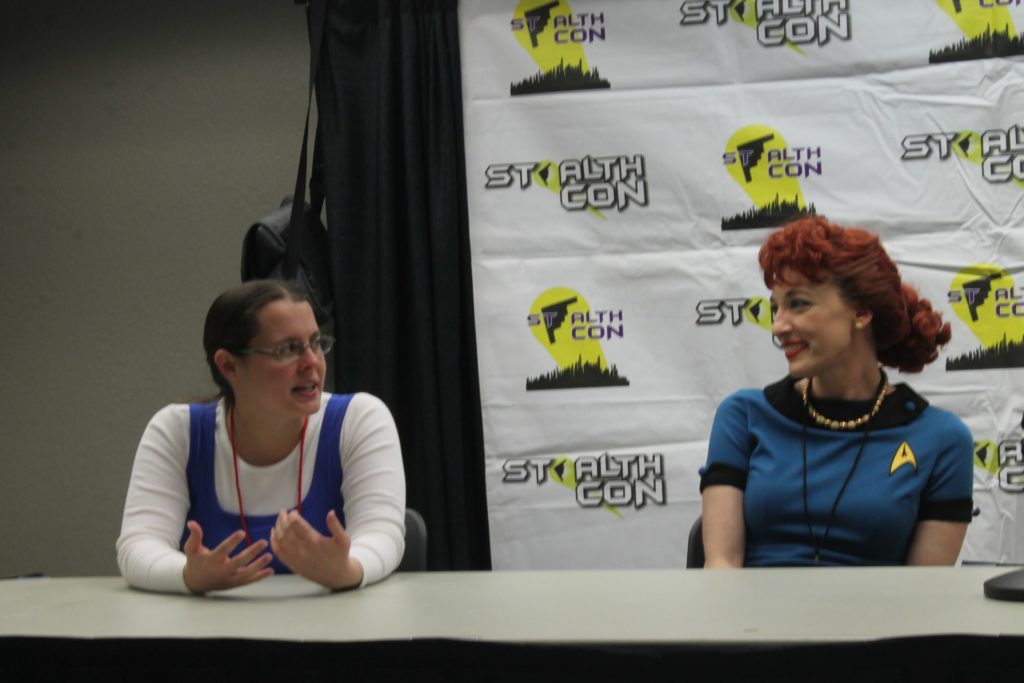 Erica Williams and Megan sit on the panel during the Cosplay for Hope session.

All on the panel spoke on an uncommon, unorthodox view, of the idea of cosplay as a therapeutic tool.

Cosplayers are present at the Out of the Darkness walk, an event focused on mental health and suicide prevention.

Members of the panel went into to detail about using cosplay in the public eye with this more serious-minded outreach, going into detail about the “Out of the Darkness” walk.

Megan, who often cosplays as Belle, from Disney’s “Beauty and the Beast,” spoke of how the subject of mental health and suicide can be lofty issues that children might not understand, but when it comes from a cosplayer in a way they can understand, they are inclined to being more receptive and understanding.

“Some of the kids who approached me at the walk were really young, so how do you talk to kids about that,” Megan said “So being a therapist, I talk a lot about suicide and depression and those really hard, awkward questions that people are uncomfortable talking about. So being able to sit down with kids and say ‘I bet it was hard for your loved one. I bet you feel sad sometimes, but you know what? You’re alright.’ Then I heard a couple kids going ‘Belle said it’s okay to be sad sometimes.’”