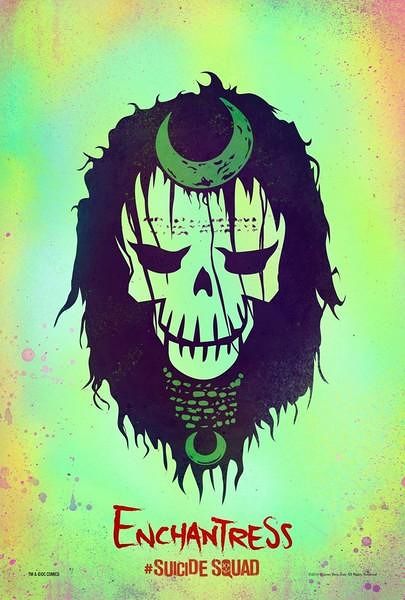 Welcome to the Suicide Squad: Enchantress

With powers rivalling those of Zatanna and Doctor Fate, Enchantress is easily one of the strongest magic users in the DC Universe. Even with all of her powers, Enchantress has had a mixed success rate since her debut in 1966, even going as long as 11 years between appearances.

Debuting with the title “The Switcheroo-Witcheroo,” the Enchantress does not have a true alter-ego, rather she is embodied through a human companion, much like the relation between Shazam and Billy Batson. The human companion who is chosen is a freelance artist by the name of June Moone. Moone attended a costume party during which she ended up stumbling into a room of a magical being named Dzamor. By uttering the words “The Enchantress,” Moone’s physical attributes change and she is given the ability to use magic.

The magic comes with a price, though. In her first mission with Task Force X, Enchantress used a massive spell to defeat Brimstone. In the process she lost control of herself and became temporarily villainous. Bronze Tiger was forced to knock her out in order to protect the team. As she spends more time with the Suicide Squad, Moone’s control over the Enchantress weakens, prompting Amanda Waller to assign Deadshot to take her out.

Before Deadshot got his chance, Moone was directed to see a sorceress named Madame Xanadu. Madame Xanadu explains the reason Moone is losing control of the Enchantress is because she hasn’t cast an aura protecting herself from evil, which she is very susceptible to when using magic. Madame Xanadu gives Moone a necklace that cannot be removed in order to prevent the Enchantress from committing acts of evil, although this was only intended as a temporary solution until Madame Xanadu could find a more permanent fix.

Popping up in comics in rare occasions, the Enchantress has gone through stories in which the spirits of Moone and Enchantress would get separated, only to be reunited. While Enchantress was separated from Moone, the Justice League Dark fought and then used Madame Xanadu to force the two spirits to reunite, as most adventures go for the character. Without much variation between “adventures” for this character, many look for the upcoming Suicide Squad film to bring forth a new era for the Switcheroo-Witcheroo.

Are you a fan of the mystical powerhouse? Let us know what you think in the comment section below, and be sure to visit CMN tomorrow for the next installment of “Welcome to the Suicide Squad.”