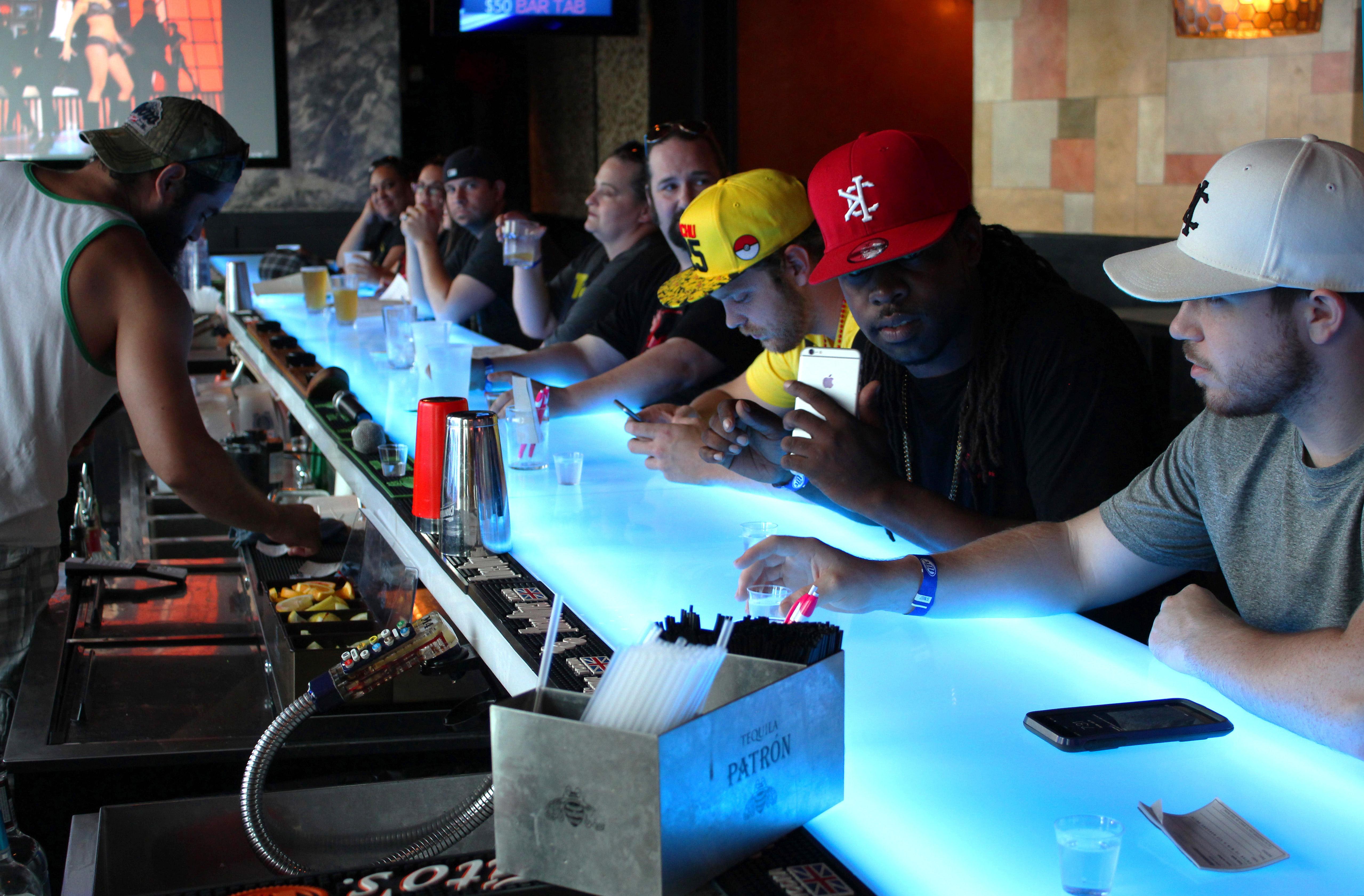 The unholy union of heat and humidity that has plagued Kansas City for the past month subsided just enough for the nerd and dork elite to meander through Westport for Sunday’s Pokémon Go pub crawl benefiting Big Brothers Big Sisters of Greater Kansas City. While the event page showed more than 5,000 people were interested and nearly 1,500 were listed as going, the crawl only brought out a few hundred. That was enough, however, to raise more than $3,000 for the organization and inspire 40 people to take a step toward becoming a big.

I expected Westport to be swamped with hordes of young adults staring at their phones; their stumbling and stammering increasing exponentially as they round up yet another dozen Spearows and Rattatas. Inching their way toward leveling up and hoping to find more elusive and rare Pokémon (as to what those actually are, I don’t know).

What I found instead was a relatively sparsely populated district – no bar had more than a few dozen people in it at one time – yet still a commingled group of hip, young, 20-somethings of all races, classes and genders. The atmosphere was jovial, the people kind, and strangers were gleefully yelling at strangers over gym battles.

The event was put together by Lexi Sage, a marketing consultant, and former ‘Big’ Carrington Harrison.

“I’m a long-time Pokémon lover and have always had a passion for Big Brothers Big Sisters,” Sage said. “I began to put the Pokémon Go Crawl together, then, out of nowhere, an old colleague messaged me on Facebook (about Harrison). I saw that he was trying to organize something similar on Twitter.”

Messaging turned to phone calls, and phone calls turned to organizing; Harrison would get the bars on board and bring on the Bigs for recruitment, and Sage would do the promotions.

The entry fee, all of which went to Big Brothers Big Sisters, gave participants access to cheap booze at each stop on the crawl. If you visited each bar listed on the event guide, bought a drink and had the bartender sign your sheet, you would be entered for a chance to win giveaways.

Registration was at Gambal’s Social Club, a half bar/half arcade east of Westport Road on Pennsylvania Ave. After I signed in I went to the bar for a drink – it was a pub crawl after all – and I needed something to wash away my hangover. It was at this bar I ran into a Squirtle; he just stood there, eye-balling me with this crazy look in his eye like I owed him money. He snatched my beer from me, so there was only one thing I could do. Little bastard took seven of my pokéballs to capture.

Next I sauntered over to Westport Ale House. The place was swarming with Team Valor. I was initially hesitant to admit to people what team I had joined. The amount of effort I put into picking a team was a five-question survey that decided for me. It suggested Mystic, so that’s what I went with. I then found out that nearly half of all players are Mystic. My entire life I have always been a proud underdog and now I have become Mystic, conformer of Pokémon.
The next stop was Kelly’s Westport Inn followed by Throwback. I had arrived to the crawl late so I couldn’t waste much time as my sheet had to be turned in by 8 p.m.

The odd ball in the pub crawl was the Doughnut Lounge, a doughnut shop that serves alcohol. Brilliant business model if you ask me. You can drink all night till the room starts spinning, and gorge yourself on doughnuts and doughnut-inspired entrees to help soak up the booze. I had gotten separated from the group at this point and had to tread onwards alone.

I made my way over to the final stop, Ernie Biggs piano bar. The place was mostly dark with a dimly lit bar – perfect for a man who had been drinking for the past few hours. There were only two other customers in the bar, a couple who sat sullen and silent, staring intently at their phones for their lure modules to spew out Pokémon. I got caught up trying to charm the waitress overseeing the empty room that I nearly missed the 8 p.m. deadline quickly approaching. So I downed my pint, said my goodbyes, and headed for the door.

Back at Gambal’s I made it just in time to punch out. I scrawled my name and contact info on the sheet and handed it off the perky Big Brothers Big Sisters volunteer at the table. I asked if there were plans to have another one: “The response was amazing from the community. We had people coming up to us saying they’d come to another one! That they loved the idea!” she said. “We hope to throw another one when it gets a little bit cooler.”