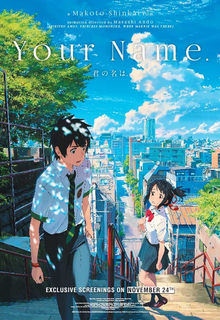 ‘Your Name’ surprises with artwork, storyline

“Your Name” was a 2016 release in Japan but hit U.S. theaters April 7. Directed by Makoto Shinkai, “Your Name” is a story filled with laughs and heartfelt moments. One could say it’s the best of both worlds.

Animated films aren’t usually my first pick, especially anime. It is an art form that has never appealed to me, though there are some exceptions – “Your Name” proved itself to be one. This movie is top-notch in terms of animation. The images in the film are jaw-dropping. The story is set in both Tokyo and Itomori, a fictional town based loosely on the Japanese town Nagano.

Throughout the movie we see representations of the hyper-urban Tokyo landscape juxtaposed with the natural beauty of a crater lake in a small, rural Japanese town. Sitting in the theater with these illustrations in front of me on the big screen was breathtaking and something I recommend to everyone. The achievements of CoMix Wave Films, the animation studio, cannot be understated. I left the theater feeling like I wanted stills from “Your Name” as artwork on my walls.

Aside from all of the beautiful animation, “Your Name” is a complex tale dealing with elements of science-fiction and romance all functioning within the trials and tribulations of being a teenager. The movie follows two characters who randomly switch bodies. One is a teenage boy named Taki who lives in Tokyo and works at a fast-paced restaurant. The other is a teenage girl named Mitsuha who lives in a traditional village with her younger sister and grandmother.

Both Taki and Mitsuha lead un-extraordinary lives with the one exception being that the two keep switching bodies. As the two try to navigate the random switching, they face normal teenage problems. Mitsuha struggles with the boredom of living in a small town and often feels embarrassed by her grandmother’s insistence on tradition. Taki must work a terrible job with a woman he has a crush on. Though the story has elements of science-fiction, the problems of both Taki and Mitsuha are relatable and speak to the uncomfortableness teenagers often experience in their own bodies.

At a certain point, Taki realizes there is more than just distance that separates him from Mitsuha. This is where “Your Name” begins to unravel a carefully crafted story of time and destiny. When Taki realizes the reason he cannot contact Mitsuha, he begins a desperate attempt to correct the past. In an effort to avoid spoilers, just know that this was my favorite part of the movie. Shinkai manages to tell a difficult story in an easy to understand way that completely engages the audience.

Honestly, my only complaint about “Your Name” is that it starts to seem a little long toward the end. I kept expecting the film to end, but it kept going, which began to grow tiring. However, the ending was worth the wait.

“Your Name” starts out as a teenage romantic comedy with a weird meet-cute, but morphs into a compelling story of impermanence and our perception of time. The film is a must-see for anime fans and non-fans alike.