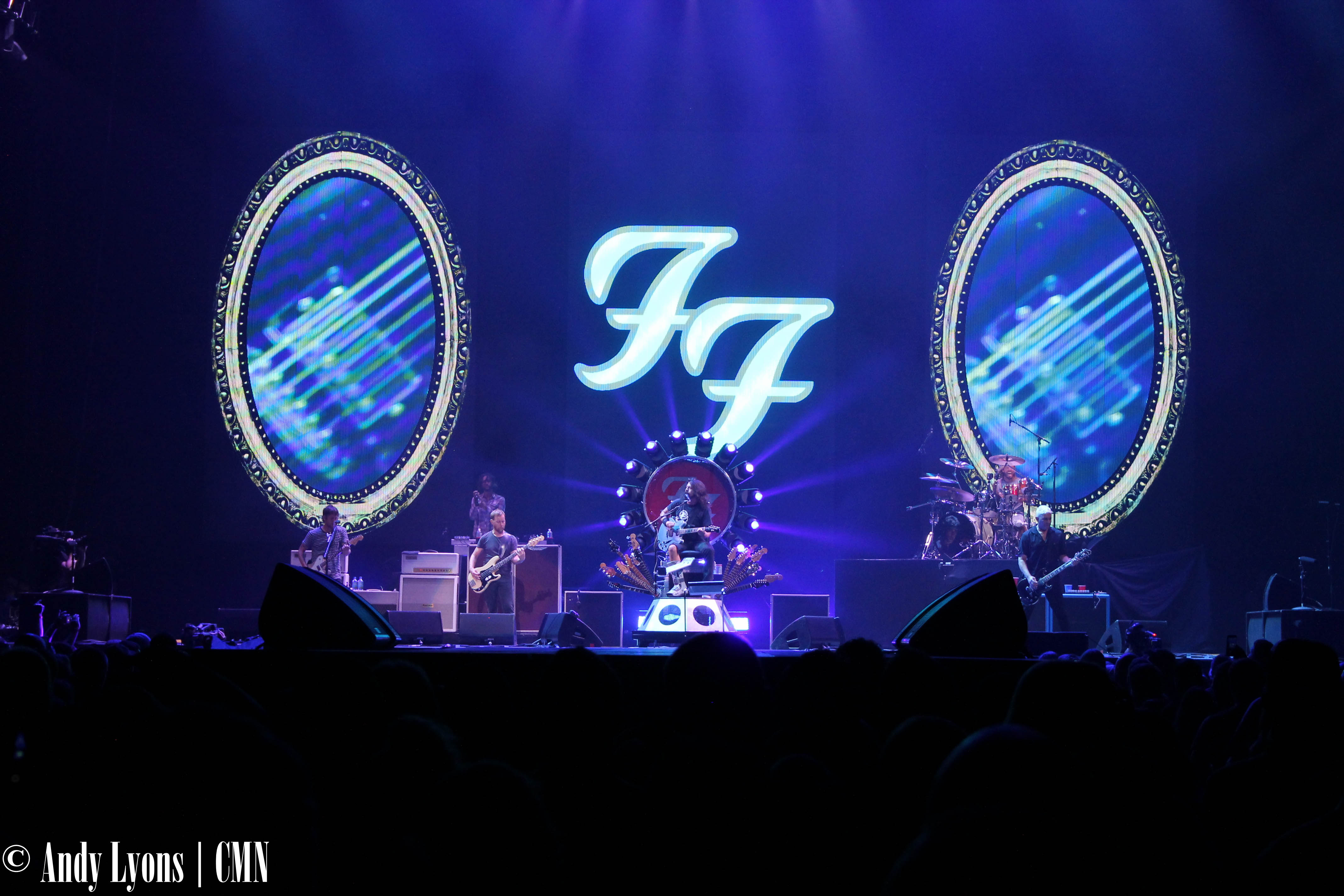 The Foo Fighters played at the Sprint Center Friday night on their Broken Leg Tour 2015. The band’s frontman, Dave Grohl, fell off the stage playing a show in Sweden earlier this summer and was told to take some time to rest. Grohl, a living legend in the work of rock n’ roll music, decided the show must go on and had a throne constructed so he could still play.

Prior to the show, the Foo Fighters mounted up in a black pick-up truck and paid a visit to Westboro Baptist Church picketers who were across Grand Boulevard from the Sprint Center. The group played “American Idiot” by Green Day as they rounded the corner and then stopped in front of the picketers and blared Rick Astley’s “Never Gonna Give You Up,” rickrolling the group.

Inside the Sprint Center, relative newcomers Royal Blood provided the opening entertainment for the evening. The duo plays a bass and drums, which was more than enough to electrify those in the arena and get the Sprint Center primed for the Foo Fighters. Royal Blood’s lead singer/bass player Mike Kerr masterfully played his bass with numerous effects. The heavy distortion gives the group a dirty sound with drummer Ben Thatcher anchoring on his kit.

The group was surprisingly good. They played for about 45 minutes and the crowd got more into them each song. They were a likably repetitive, sticking to their sound as Kerr swapped instruments for different effects on the bass’ sound. The group is definitely one to watch, with a lot of buzz for them in the UK. The tour is a definite opportunity for the group to demonstrate their sound to a super picky group of U.S. fans.

The Foo Fighters hit the stage with a powerful version of “Everlong” and it was non-stop rock for the next three hours. Grohl’s throne is almost an extension of the rocker’s personality, with lights and “lazers” and guitar necks peeking out from the sides a la The Iron Throne. Throughout the set, the throne would move down a catwalk that extended to the middle of the floor so Grohl could interact with the fans. It was obvious Grohl didn’t care to be stuck sitting for the entire show, as the rocker was constantly turning and focusing on fans throughout the venue. The amount of headbanging and moving around in his throne was testament to how much Grohl would have liked to be a bit more mobile.

The Foo Fighters played a really intimate set, and constantly interacted with the crowd. It felt more like the show was in Grohl’s living room than the sizable Sprint Center. At one point during the set, with his throne out in the middle of the crowd, Grohl talked to the crowd while strumming the chords to “Big Me.” He asked if we wanted a story about how he broke his leg featuring a power point, to which some fans in front of him yelled “No!” In typical Grohl fashion, he joked with them and gave the presentation anyway. He joked that his “Swedish lover Johann” was concerned about his dislocated ankle and when Grohl wanted to get back on stage, “Johann” ended up being the nurse caring for him who now famously held Grohl’s foot in place while they finished their show.

Later in the set, Grohl introduced the other members of Foo Fighters. For each one, the band went into jam sessions and covers of songs such as Van Halen’s “I’m the One” and Alice Cooper’s “School’s Out.” Grohl went to the end of the catwalk and sat in a stool for an acoustic version of hit song “My Hero” that featured keyboardist Rami Jaffee on the accordion and the entire crowd as backup singers.

As time wound down and Grohl mentioned playing another three hours, but couldn’t, he asked the crowd to sing with them on one last song and he promised to come back and do it again. Those in attendance didn’t disappoint, singing “Best of You” loud enough it drowned out the vocals coming through the PA system of the Sprint Center in an awe-inspiring performance that was the perfect ending to a night with the Foo Fighters.