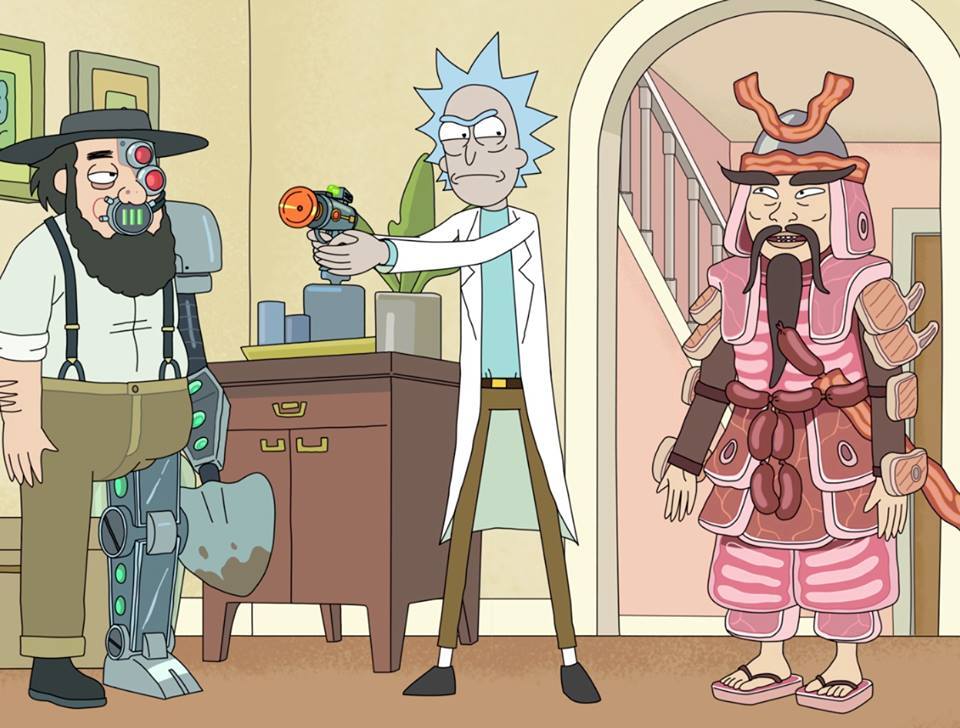 On the night of Aug. 16, Rick and Morty proved, once again, to be my favorite animated comedy show on TV with season two’s fourth episode, “Total Rickcall.” The second season is only on its fourth episode and, in that short period of time, has not only produced some of the greatest animated episodes to ever dawn the small screen, but has also managed to get picked up for a third season because of the show’s growing viewer base. Every episode of the second season has had its own unique feel to it – while last week’s third episode proved to bring on the water works, this week’s episode brought on a barrage of laughs in its Jam Packed 30 minute episode.

“Total Rickcall” begins with Rick, Morty, and the rest of the Smith Family (Beth, Jerry and Summer) eating breakfast with their cool Uncle Steve who has just come in to visit. Rick proceeds to shoot Uncle Steve and reveals him to be one of many parasites loose in the house that gives the Smith family false memories. These false memories are presented as cutaway gags that have dangerous repercussions – every time a gag recalls a nonexistent character, it comes to life in the house which results in hundreds of over the top throwaway characters showing up in the household.

The idea of lampooning cutaway flashbacks was executed brilliantly – for one, the episode premiered after an old rerun of Family Guy, a show almost reliant on its cutaway gags. Rick and Morty is a show that is memorable because the characters are always developing, and nothing hinders character development like a non-sequitur gag played up solely for laughs. But in the world of the show these flashbacks, although illusions of the mind, reveal a lot about their characters because they all react to these memories and internalize them. Jerry has a memory of relationship he was never in, but his tears and feelings of invalidation about the relationship tell us a lot about who he is as a character.

This episode has such a zany array of wild, imaginative and totally made up characters that show a lot of creativity from both the writers and the animators. The episode’s large cast of one-off characters would give “The Simpsons” a run for their money, among this cast is an anthropomorphic pencil voiced by Tom Kenny named Pencilvester and a silent meat warrior named Hamurai. The amount of detail and creativity that went into the design of these characters proves how dedicated the Rick and Morty animators are, and you can certainly tell they loved designing all of these parasitic creatures. Like Rick says when looking at these outlandish creatures, “What is this? 90’s Conan?!”

Perhaps the greatest achievement the show accomplishes with this episode is being able to further develop the characters we see every week through meaningless cutaway interactions. The memories they have may be warped, but their feelings about these memories are real and they reveal truths we haven’t seen in previous episodes. In this episode alone, we see Beth confront alcoholism, Jerry face repressed homosexuality, and Summer manifest feelings of neglect. Rick and Morty then discover that the truth can be discovered through dramatic cutaways – painful memories help the characters sort out what is real in their world.

With a fantastically dark and somewhat abrupt ending to the episode involving a supposedly lifelong family friend, Mr. Poopybutthole (I’m not making that up), the show wraps up neatly and explains clearly why cutaway gags just cannot work for a show as focused on its characters like Rick and Morty is.

The second season has been consistently great, and while I was sure last week’s episode couldn’t be topped, I was proved wrong with “Total Rickcall.” This new episode and all of the previous ones can be watched for free on Adult Swim’s website. I can only see the show getting better from here. Rick Sanchez described my sentiments best in the pilot episode, “Rick and Morty forever and ever, 100 years!”