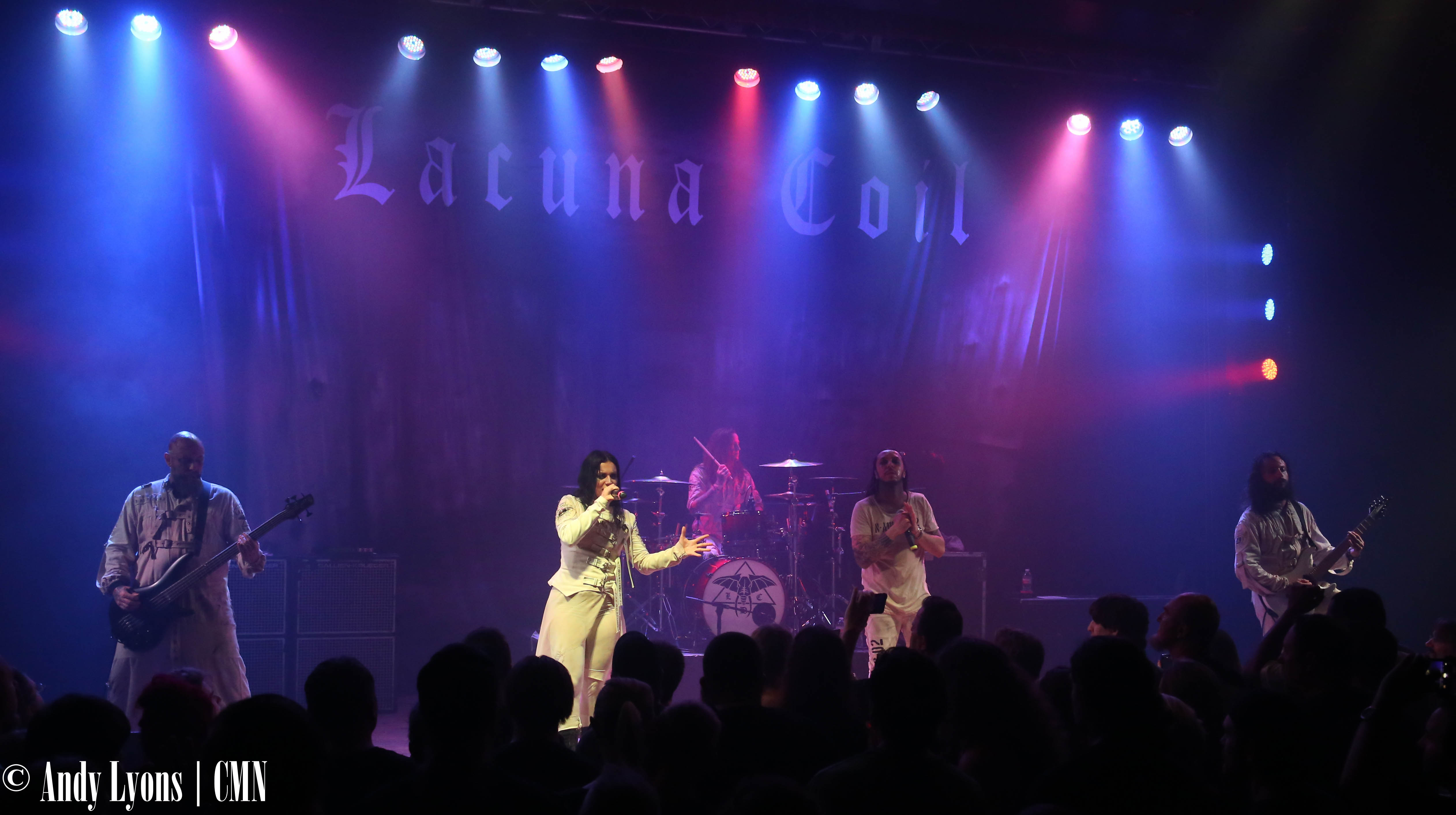 Black T-shirted crazies gathered at The Granada in Lawrence, Kansas, Friday night as Lacuna Coil’s Delirium World Tour rolled into town with support from Painted Wives, 9ELECTRIC, and Stitched Up Heart. Despite a smaller crowd, all four bands put on high-energy performances and the crowd gave just as much.

Opener Painted Wives kicked off a night that would see all four bands heavily interacting with the crowd. The crowd was head-banging and fist-pumping by the second song, and the Los Angeles-based band made sure to thank them for their participation. A fan apologized when lead singer Justin Suitor mentioned it was their first time in Kansas, and Suitor assured those in attendance The Granada was far from the worst stop the band had played.

Painted Wives had a throwback feel to their sound. Musically, they sound kind of grungey with a heavy edge, while Suitor’s vocals easily compare to an early Ozzy Osbourne and shift to delivery style similar to the late Layne Staley of Alice in Chains.

Next up was 9ELECTRIC, who came out on fire despite some technical issues while preparing their set. All the members on the stage were running around, jumping, head-banging, or flashing some nipple. One of the most unique parts of the show was the lack of a barricade between the fans and the stage so there was plenty of direct interaction. Lead singer Thunderwood was caressing people’s faces and flashing his nipples and the crowd went ballistic.

Guitarist Mikey Lopez rocked a handful of solos throughout the set and the energy level of the venue skyrocketed. The band has an electronic industrial-metal sound reminiscent of Powerman 5000 and Thunderwood’s stage presence is a modern iteration of Billy Idol. With Micah Electric on drums and Casey DC on the bass, the band has a sound that is unique compared to a lot of what is on the radio today.

Lending support was Stitched Up Heart, a female-fronted five-piece, and they kept the momentum going. After some technical delays, they hit the stage hard and heavy with the front four jumping, swaying and jamming the crowd into frenzy. The band is fronted by the short, blonde-haired Mixi and she wasted no time crouching down nose-to-nose with fans next to the stage. Guitarists Nick Bedrosian and Merritt Goodwin along with bassist Randy Mathias were all over the place, jumping off risers and pointing to the crowd. It was glorious pandemonium in the pit section of the Granada.

The band follows a similar formula as bands such as Butcher Babies and In This Moment, with a heavy sound coupled with a female vocalist with brilliant range, able to sing chill-inspiring melodies with enough timbre to belt out screams and growls. The boys behind Mixi compliment her range perfectly, with blistering rhythms and a composition of anthems that make them marketable to rock radio and a must-see live.

The Granada filled up as Lacuna Coil hit the stage. All five members wore asylum-style jumpsuits, a nod to the tour’s name and the title of their album released a week before the show, “Delirium.” While guitarist DiDi Cavallotti and bassist Marco Coti Zelati were relatively stationary throughout the set, vocalists Cristina Scabbia and Andrea Ferro were all over the place. The energy was through the roof and the crowd began to mosh with the first song. The band played an expansive setlist, including some early hits older than some of the fans at the show.

One of the unique dynamics of the group is somewhat dueling vocalists with Scabbia singing melodies and Ferro giving the band a heavy edge with gritty delivery. Down-tuned guitars and thundering bass make the band a mosher’s dream, with a heaviness to them to rock out but a soft edge that others can enjoy and rock to.

All four bands made it a point to keep the focus on the fans all night, even offering to meet with fans at each band’s merch booth after they performed. The musicians kept the crowd involved during each set, either by talking directly to them or by actually reaching out and touching them. The bands all had high energy and had fun, and the crowd ate it up. With the variety of sounds and the constant crowd interaction, the show was one of the best of the year so far in the KC area.