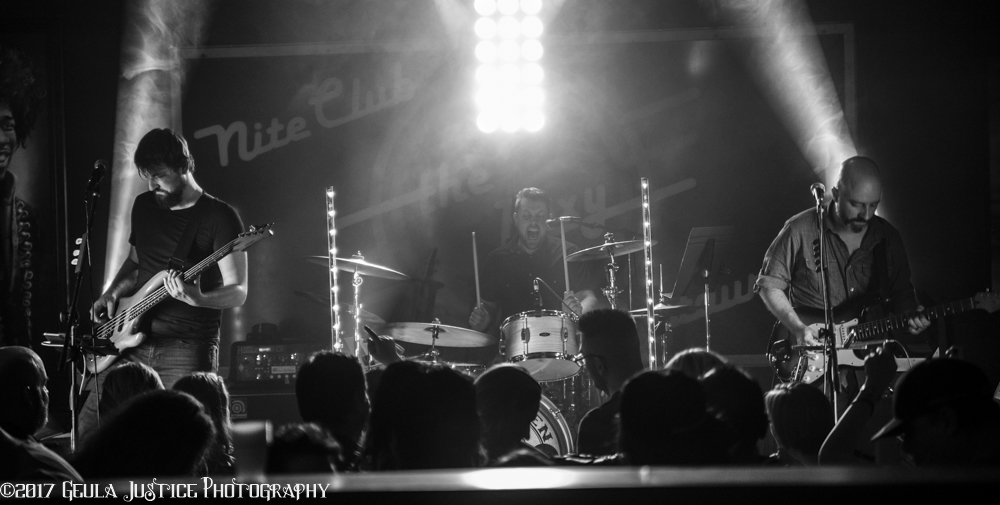 The Roxy Bar celebrates grand reopening with The Stolen Winnebagos

2017 has been a rollercoaster of a year for Jim Kilroy. He accepted a buyout of the former home of The Roxy Bar, and almost immediately began planning the return. In a packed night featuring music headliner The Stolen Winnebagos, Kilroy celebrated the grand reopening of The Roxy Bar at its new location 13410 W. 62nd Terrace Shawnee, Kan. last Friday.

The Stolen Winnebagos actually have a rich history with Kilroy. After he took over The Roxy in March 2014, he said he left all the bookings made by the former owners in place and it didn’t go very well. After about five or six weeks, the Kansas City rockers played the club for the first time under Kilroy’s ownership and he said the night was a success.

“They were a pretty consistent band for us,” Kilroy said. “After the first of the year, when it started looking like we were going to close on March 31, I saw on their calendar that they had the date open. I thought they would be perfect to play our last night and it ended up being a blowout. With the new club, when we finally got everything up to code and the city said I could let people in, I looked at their calendar and saw they had
Nov 3 open. I decided that was going to be our Grand Reopening Party and got them booked for it. It ended up being a blowout.”

Kilroy said he had a good response as the old location finished out its final month, including several former owners visiting the weekend prior to closing while Charlie & The Stingrays played. Regulars packed the house for closing night Friday, March 31. Kilroy woke up Monday, April 3 and went to work.

During the last month of business at the old location, Kilroy said he had three different sites he was looking at. He said after he decided on the new location in Shawnee, Kan., about five miles from the former location, it was about two weeks when he reached an agreement with the landlord.
From there, Kilroy said he went through the process of getting special permits to have live music, including bands and DJs, in Shawnee. He said he took over the space July 1 and immediately started preparing to function as a live music hotspot, starting with a cold open in August.

“The response has been very positive from both bands and customers,” Kilroy said of the new location. “People from the area around the new club have been supportive. And they seem glad to have something like this around. Several people have commented to me that Shawnee needs something like this to shake it up a bit.”

He said some of his regulars from the old club have been in, but not as much as they were when the club was right down the street, but he sees the new location as an opportunity to attract new regulars from the area.

The new location offers a bit of a change from the old, with a stage setup that is easier for bands to load in and load out as well as two rooms. The main room has the stage and there is a party room with a full bar where bands can play as well. It also features a patio smoking section and a bigger, more accessible parking lot. There is also an expanded kitchen which has led to a bigger menu, and Kilroy said he plans to get a smoker and offer barbecue in the future.

Kilroy said he is looking forward to the new chapter for The Roxy Bar, and looking to the Kansas City community to help him get the bar where it needs to be.

“I’ve put in a lot of work on this space and I’ve got a number of ideas I want to incorporate as we go forward,” he said. “I’ve got a lot of admiration for Frank Hicks and what he’s done at Knuckleheads. He continues to add and develop things at that club. I have things in mind for this place; it’s just going to take time and money to make them all happen.”