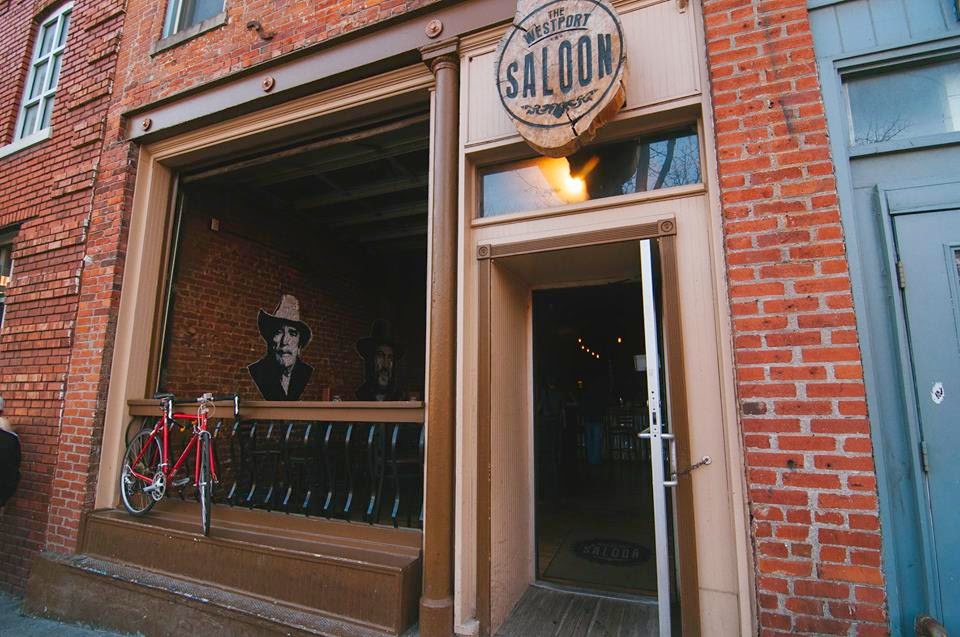 A Thursday Night Hootenanny in Westport 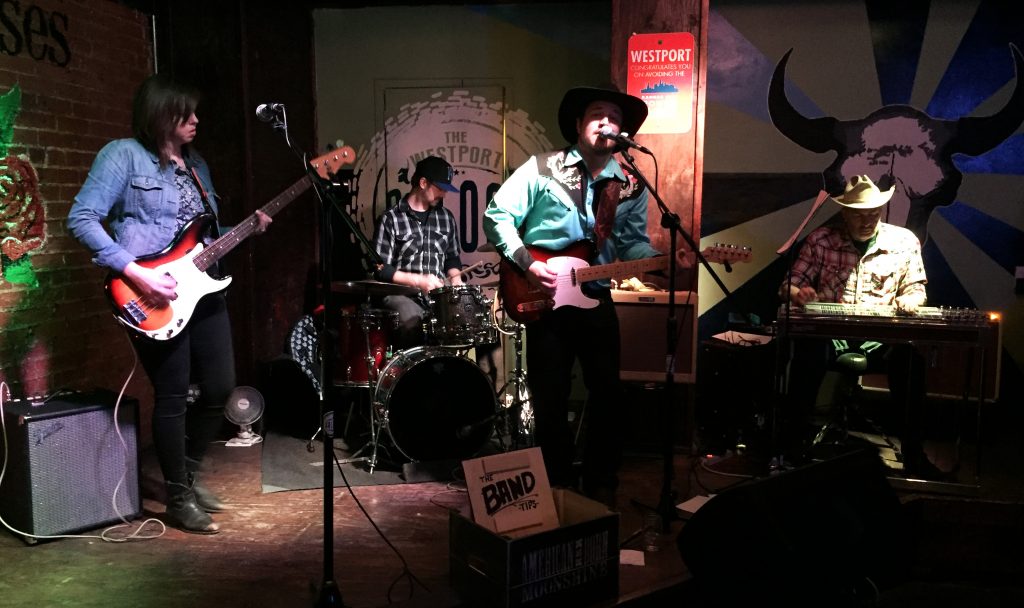 Every Thursday, Dusty Rust – as he is affectionately known to the masses – slips on his boots, picks out a shirt from his arsenal of pearl snaps (tonight it was turquoise), crowns himself with his black Stetson, and takes the stage at The Westport Saloon, Westport’s premiere honky-tonk and blues bar.

Half a block from the heart of Westport, the Saloon resides in Mabry Hall, a building that was built in 1843 and contests Kelly’s Westport Inn as the oldest building in Kansas City. It boasts itself as an American roots venue with plenty of charm and whiskey (over 100 varieties). The building acts as a safe haven from the pretentious hipsters and yuppies of Harry’s to the north, and the faint smell of urine that wafts through the all too appropriately named Buzzard Beach to the west.

Thursday’s theme at the Saloon is the spaghetti western, and with it an entire evening that revolves around the American spirit: American movies made by Italians and all-you-can-eat Italian food made by Americans to cram down your gullet until you can cram no more. After the movie, the stage is overtaken by Dusty Rust’s classic style of country and honky-tonk, a sound that flows in the same vein as Waylon Jennings, Buck Owens, George Jones, and Bocephus.

For me, the sound is reminiscent of the one that blared out of the speakers in my aunt’s beat up Honda when I was a child, an echo of the music that reverberated from my uncle’s garage while he was working. A period of time long before I would realize how much I hated country and western as a punk teenager, kicking around in a small town, and an even further time before I realized how much I would grow to love it as an adult, staggering around in Midtown.

Thursday nights at the Saloon reinvigorated my love of classic country. In too many parts of the city there is never any live music being played, not regularly at least, so traveling to Westport is a must to fill the void. Dusty and the gang have been playing as the Thursday night house band since December of 2014, and while I don’t remember how I first stumbled into the bar, seeing them play there made it quickly become my go to spot after I moved back out here late last year. 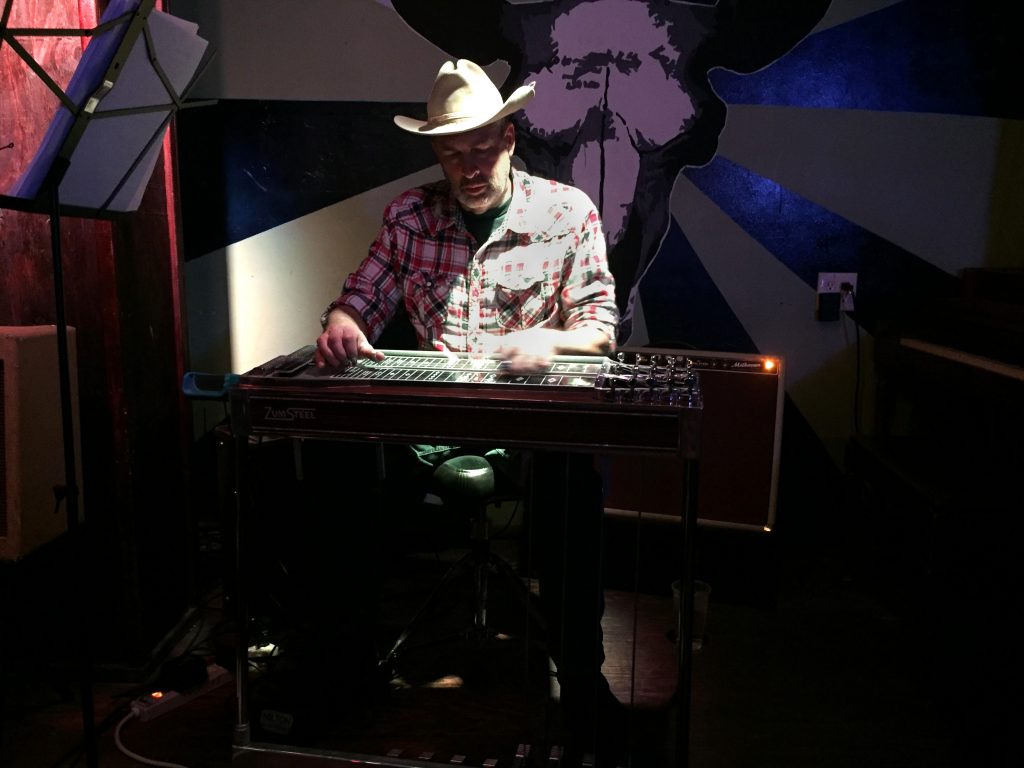 Dusty had been playing around with a few other groups as a “hired gun” for a couple of years, and had been doing the Rusty gig for three years or so before he finally got a group to settle down with and take it seriously, though he isn’t an iron-fisted ruler.

“I’ve always had a relaxed band policy,” he said. “Like, if you can make a show, please make it. If you can’t, let me know and I’ll find somebody else who can. I don’t like the hassle of ‘You’re in my band. I don’t want you playing with anyone else.’ That kind of bullshit. I like for people to have freedom and lives.”

The most surprising thing about the Saloon is that they never charge a cover to get in. It’s an idea that is set aside all too often by bars and venues in the pursuit of squeezing every last dime out of the music-loving community.

“I love these kinds of bars because they’ve got it figured out,” explains Dusty. “It’s a good business model that they have. They know how to pay the bands the right amount.”

And the right amount, whatever it may be, is coming straight from the owner’s pocket, and that’s something that should very much be respected in this day and age. But that is not to say that the group is all about making a quick buck, there are a lot of perks that they benefit from by playing certain venues like the Saloon.

“I don’t play for nothing, but I had one show where one night we made like $16, which is bullshit, but they had a good crowd and they dug it,” Rust said.

Though with the Saloon in particular he adds, “there’s a lot of networking that happens here in this bar in particular. There’s bands that fill up bigger rooms that take price cuts just to come play this bar. When you have a good relationship with this place it’s awesome, but if you don’t, well… it’s a give and take thing.”

The group has to balance their regular lives and jobs with the band as well. They are not the hard partying, rough and tumble group that classic honky-tonk is known for, so finding time to practice regularly can become difficult or non-existence. Chelsea Rae, the bass player of the group as well as a bartender at the Saloon, added that “from a band standpoint it’s really good as far as your weekly rehearsal. We play four hours every week, and it changes how we all play together.”

The crowd at the Saloon is loyal to the group which makes the environment more laid back for the band members, even bringing up other musicians to play with the group or switch out with one of the members. It’s a type of show that lets them try to do something on the fly that they might not want to attempt in front of a crowd outside of the Saloon. And as busy as they are, they still take plenty of time out of year to tour.

“We are always trying new songs. When you’re not touring it’s an automatic 52 shows a year, and then when we tour that’s another however many other. This year we’ll probably do a hundred, a hundred-fifty shows when the whole year’s done,” Rae added.

Regardless of your preference of style or musical taste, Dusty Rust puts on a damn good performance, and it pairs well with a glass of whiskey too. You would be remiss to not spend at least one Thursday at Westport Saloon to catch his act. Even if the idea of a city cowboy singing country and western music (a style that must seem archaic to millennials) turns you off, remember: there is no such thing as a bad genre of music, only bad musicians. And when it comes to talent, Dusty and Co. have it oozing out of their chaps (just don’t stand behind them).