LATEST NEWS
06:23 PM
Home News Eating For A Cause 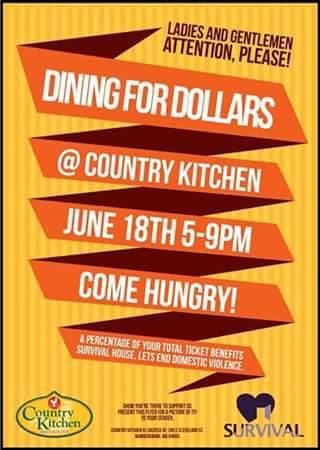 Eating For A Cause

Hungry stomachs and helping hands are set to descend upon Country Kitchen Thursday in order to support those in need. The occasion is called Dining For Dollars. It's a fundraiser put on by Survival House in cooperation with Country Kitchen. Survival House, founded in 1982, is a Johnson County based outreach program dedicated to helping the survivors of domestic abuse and sexual violence. The work they do goes beyond providing services for clients, though that's the organization's main focus.

Survival House often works with the University of Central Missouri, providing information and allowing for student involvement. Fundraisers are another part of Survival House's involvement with the community. Bradley Schulte, coordinator at Survival House, stressed the economic importance and necessity of fundraisers.

“About 68 percent of our budget is covered by Federal and state grants, and those grants only cover direct services, as in funding our shelter, staffing, etc.,” Schulte said.

“The vast majority of the funding does not cover direct services, such as paying utilities, putting down  a deposit on housing or going back to school,” Schulte said  “ That's where we come in and find people in the community who either want to donate or want to put on fundraisers to help us out.”

Dinning for Dollars will mark the first time Survival House has worked with Country Kitchen. At the event, customers are to present the event's flier, in either paper form or digital form, when paying for their meal and a portion of the total will go to Survival House.

Survival House has put on fundraisers with a diverse array of local businesses, including bars, such as the Bay and Stonehouse East Pine Pub. Schulte admits the bar scene might not be for everyone.

“When Country Kitchen approached us, we came together, and we thought ‘well you know this can be an event that most people can attend, at least bring their children to it, have it a family event.’”

Schulte said he believes that an event like Dining for Dollars expands the horizons for more people to participate.

“They're not just going to eat dinner or lunch or whatever it may be,” Schulte said. “They are actually helping other families to be able to do the same thing.”

Elaine Sepulveda, executive director, of Survival House, said the most important thing about the fundraiser is that it helps the clients.