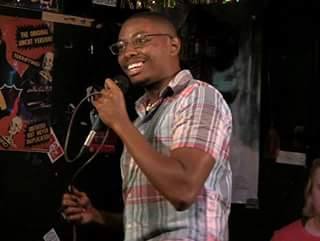 Posted By: Andy LyonsPosted date: May 07, 2015in: News, WarrensburgNo Comments

Comedy is not a laughing matter for Kollin Bell, a 22 year old junior at the University of Central Missouri. It’s serious business.

“Comedy is actually more of a manifestation of many other things that we love and do in life,” Bell said.

Words fly out of his mouth at a rapid pace when Bell describes his motivation for doing stand-up, accompanied by occasional hand motions that act as physical exclamation points

As Bell explained what it’s like to do comedy, he expressed a sentiment parallel to Rodney Dangerfield’s “I get no respect” tagline. Dangerfield repeated the one-liner as part of his act, but Bell believes comedians are under appreciated as artists, and he sees comedy as an art form that is viewed in a lesser light by many.

Bell said doing comedy includes communication skills, honesty and creativity, and that these are good values.

“People don’t really respect it (the values) when you say you do comedy,” he said. “They respect it when these values are put into somebody that’s a book writer or when people do news.”

Bell explained that behind the veneer of a clown that the comedian often utilizes higher order thinking skills. Bell said doing comedy has led to him becoming more aware, paying more attention to current events and reading more. The topics of Bell’s act are a mixture, ranging from issues of race, to observations on pop culture, to the typical aspects of college life.

The seeds of Bell’s stand up were planted in his hometown of St. Louis. Bell entertained the idea of doing comedy while in high school, but he knew the topics he wanted to touch on would be inappropriate for a high school audience. Later on, while working at Six Flag’s amusement park, the summer after his senior year of high school, Bell’s comedic side started to show.

After discovering he could work a crowd, he auditioned for a comedy showcase at UCM during his sophomore year, thus marking the beginning of doing stand-up on campus.

As Bell pushed forward with his act, he found a road block, a lack interest in stand-up comedy in Warrensburg.

“A place, like this, in Warrensburg, it’s a dead end,” he said. “It’s not welcoming; I feel a place like Columbia, Mo. is welcoming.”

Bell said he has had favorable experiences with Columbia’s established comedy circuit. While doing stand-up comedy in Warrensburg, Bell has at times received a lackluster local response at bars and open–mic events.

“There was a bar that I tried to do a couple of times, and there was maybe five people there. They were all drinking, not even looking at me, not even paying attention,” Bell said. “It’s like having a birthday party, and nobody brings you presents, and they just come to eat the cake, and they don’t even tell you happy birthday.”

To regularly soak up the comedy culture that Bell loves, he often travels to Kansas City, Mo., Columbia or St. Louis. He said traveling is awesome, but he would like to see a more nurturing environment for comedy locally. The desire to try and build a more supportive comedy atmosphere led to Bell recently creating the UCM Comedy and Improv Club. The organization has yet to become official, via UCM’s Office of Student Activities, but he has enough members to qualify, and Bell recently found a faculty adviser, Eric Newsom, assistant professor of communication. Newsom decided to sign on because of the passion in which Bell spoke with when pitching the idea. Like Bell, Newsom also believes that skills other than just humor are acquired when doing comedy.

Bell said the building of a comedic student organization will allow students who tell him they could do stand-up a platform to try.