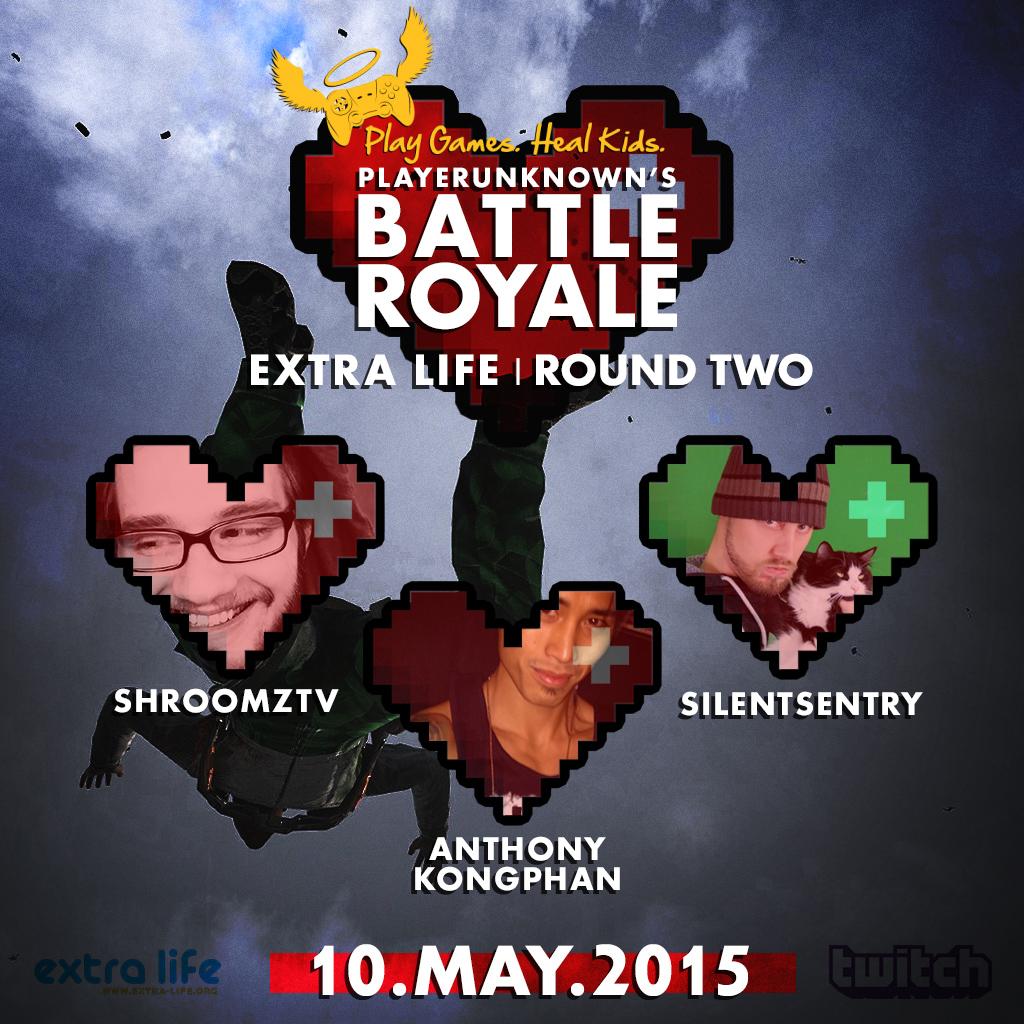 Posted By: Andy LyonsPosted date: May 10, 2015in: Entertainment, News3 Comments

Kansas City gamer Anthony Kongphan has been using the online video game streaming service, Twitch, for more than four years. With more than 83,000 followers and a vast multitude of subscribers, he often uses his stream to raise money for charities such as the Great Strides Cystic Fibrosis Foundation, a charity for children suffering from the disease. He raised more than $13,000 for the group during a stream that lasted more than 43 hours April 28. 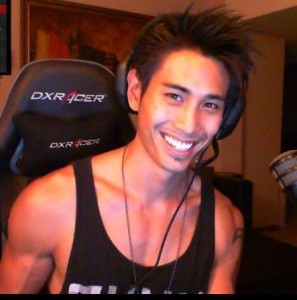 (Photo submitted) Kongphan behind his computer.

Kongphan is planning another charity stream May 10 (today) as part of PlayerUnknown’s Battle Royale supporting the Extra Life charity. According to its website, Extra Life is a charity that started with a 24-hour video game marathon to raise money for the hospital that treated Victoria Enmon, a young lady who had acute lymphoblastic leukemia. Since then, Extra Life has become a way for thousands of gamers, more than 100 websites and thousands of donors to help kids closer to home as the charity works with Children’s Miracle Network Hospitals all over the country.

After Kongphan’s nephew spent time at Children’s Mercy Hospital, he found a desire to use his stream for charity.

“My sister’s son was hospitalized at Children’s Mercy Hospital, I also have a very keen heart towards kids in hospitals,” he said via email. “I also love helping others in any situation, it truly gives me a great source of meaning in life each time I do a charity.”

The charity stream will feature Kongphan playing with two other Twitch personalities, SilentSentry and Shroomztv. Kongphan said he and SilentSentry play together a few times during his normally scheduled streams, from 6 p.m. to midnight CST Monday through Friday, but Shroomz plays a different schedule.

Kongphan said he decided to get involved with Extra Life because he knew the host and wanted to jump on board for the cause.

“I was first approached by ‘PlayerUnknown’, the mastermind behind the popular Battle Royale mod for Arma 3, and of course knowing him personally and it was for a great cause I accepted the invitation,” Kongphan said.

During the Great Strides charity stream, Kongphan’s followers helped him raise more than 400 percent higher than his original goal. Kongphan said it was surprising to raise that much money for charity.

“It is such a surreal feeling, never in my life did I think I could ever play video games and help people in need at the same time,” he said. “It truly is the best gift to see that there are so many good people in this world still and seeing everyone working together for such a great cause.”

After his latest charity stream’s success, Kongphan said he thinks his community of followers, affectionately called ninjas, will support the Extra Life event as well.

“Always again I have high expectations on my goal and my Ninjas absolutely SMASH it every time,” Kongphan said. “So to be honest all I know is we will be kicking ass in this charity once again.” 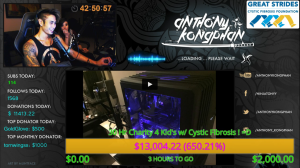 (Photo submitted) Kongphan raised more than 400% of his goal for the Great Strides charity.

Kongphan has a reputation of long streams, and when asked how long his Extra Life event would last, he refused to put a time limit on it.

“The Children’s Mercy charity was supposed to be 30 hours, then went to 40 hours, finally ending at almost 56 hours,” he said. “I just cannot make myself stop streaming when I know every cent counts to help these children, so when the donations roll in Anthony doesn’t stop.”

As far as which games Kongphan and his fellow streamers will play, he said he will probably play a rotation of games.

“I find it much easier to switch games up every five hours,” he said. “It makes the time (go by faster) and also keeps my mind alert by switching to various games. Most likely will start out with DayZ, add in some Grand Theft Auto, CounterStrike: Go, Mortal Kombat X , Resident Evil. After that the sky’s the limit.”

Kongphan said his next charity will be the 8-bit Salute Fourth Annual Gaming for the Troops event, which will take place May 16.

“The upcoming stream for 8-bit is for www.operationsupplydrop.org, an amazing team I met at PAX East,” he said. “They help out mainly disabled, wounded veterans, troops with charity events and also Astro (gaming accessories) has been kind enough to help out by giving many giveaways for the veterans. Much thanks to ShannonZkiller and Sacriel for referring me to them.”

Kongphan’s first charity stream was Nov. 25, 2013, for Child’s Play charities. He said since he did the 24-hour stream he’s been addicted to doing charity streams. All of the charities he’s worked with thus far are focused on children. The 8-bit stream will be a 60-hour event and the first time Kongphan has done a charity for wounded veterans.

Kongphan got his start with streaming when Twitch was brought to his attention by a friend and streamer who thought his personality and energy would lead to a successful stream. He had success with his stream and now it functions as his full-time job.

Kongphan said his stream is unique because he tries to be himself, and he models his stream off of a user he enjoys watching.

“All and all my personality the most (makes my stream unique),” he said. “I have always been a huge fan of Lirik a streamer with such a huge following and all because of his unique personality and commanding presence, definitely many similarities with him – love for the game, streaming 24/7, good heart.”

Kongphan said he primarily plays post-apocalyptic zombie game DayZ because that’s what his fans prefer, but he hopes to move on from there eventually.

“I mainly stream DayZ , most of my fanbase is from that genre,” he said. “I have a love for all various games. Until I feel completely comfortable financially and have a stable base fan of viewers no matter what I play, you will eventually see me streaming all various games that I enjoy.”

Lately on his stream, Kongphan has been switching between DayZ and Grand Theft Auto 5. He said he chooses what he plays based on how he feels about a game. He said he gets excited to play for content, such as streaming Tomb Raider, and he loves to beta test games.

Kongphan said his stream is his dream job, and has introduced him to many great people.

“I have always enjoyed entertaining and helping and making people laugh,” he said. “So it has been my dream job to pursue this career, not to mention the wonderful great other individuals (streamers/viewers) I meet along the way on my journey.”

Kongphan said he tends to put real life on the backburner for his stream, but has taken a liking to riding his motorcycle and spending time with his family.

“Oh how I love riding, definitely one of my favorite hobbies at the moment,” he said. “I tend sometimes to stream WAY too much and forget about things I need to do outside of streaming. I am very close to my family, so usually if I am not streaming I am spending time with them. Mostly I balance it with the two days I make myself take off, even if I feel that I want to stream I force myself to relax, take time away from the computer so I am prepared for the next week!”

When he’s not streaming, Kongphan said he plays more video games off stream and frequently goes to the movies alone.
Kongphan said he had to truly dedicate himself to his stream to make it so successful.

“To reach the point I am at now took an insane amount of dedication, time, lost friends and girlfriends,” he said. “So much I have learned ever since I began and much more to learn, when it all comes down to it. Hard work truly pays off in the end.”