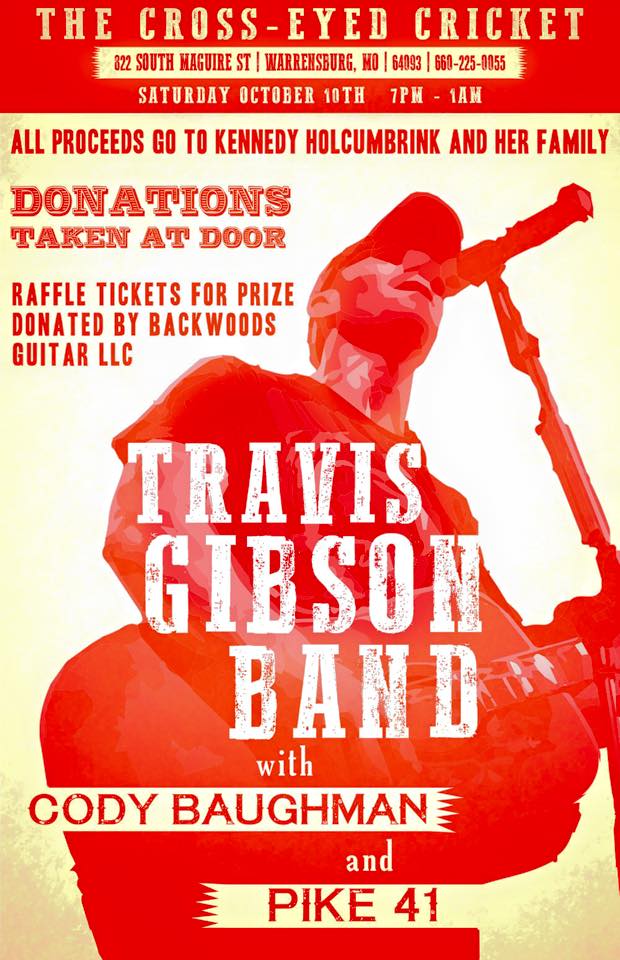 Benefit planned to assist family of child with leukemia

The Warrensburg community is coming together to support a local 3-year-old who was diagnosed with acute lymphoblastic leukemia earlier this year.

A benefit will be hosted Saturday night at The Cross-Eyed Cricket, located at 822 S. Maguire St. in Warrensburg, featuring live music and a raffle with all proceeds being donated to the family of Kennedy Holcumbrink.

The night will feature line dance lessons from 4 to 7 p.m. The music will start with Cody Baughman, of Clinton, Mo., performing an acoustic set, followed by country duo Pike 41. Closing out the night will be Travis Gibson Band, whose lead singer and namesake put the benefit together for a hometown friend.

Gibson is from Vandalia, Mo., and grew up with Kennedy’s father, Dustin. Gibson said he competed in basketball with Holcumbrink, but eventually the friends fell out of touch. Holcumbrink and his wife, Blair moved to Pleasant Hill and caught up with Gibson at some of his shows in the area and reconnected. After Kennedy was diagnosed earlier this year, her grandmother reached out to Gibson about putting something together.

“I took on the task because I felt the need to help out a great family going through an extremely tough time,” Gibson said.

“Travis has always been one of our regular acts,” Lemasters said. “It was something he wanted to do and we were all aboard.”

Raffle tickets will be available during Saturday’s event for $5 each for an item donated by Backwoods Guitar LLC out of Sedalia. Gibson said he hasn’t received confirmation on what the item is yet.

Gibson said people should come to the show for multiple reasons.

“People should come to the show to obviously help out a 3-year-old in need, but also to have a great time,” he said. “Come out and enjoy a new venue in Warrensburg who was gracious enough to lend their establishment. Come out to show support for live music and some great up and coming country musicians.”

The Cross-Eyed Cricket will serve food through most of the evening and the first musical act will go on at 8 p.m. All acts will be playing for free and the only cost of admission is a donation of any amount at the door. The event is open to all ages until 11 p.m. Minors will need to be accompanied by a parent or guardian after 11 p.m.