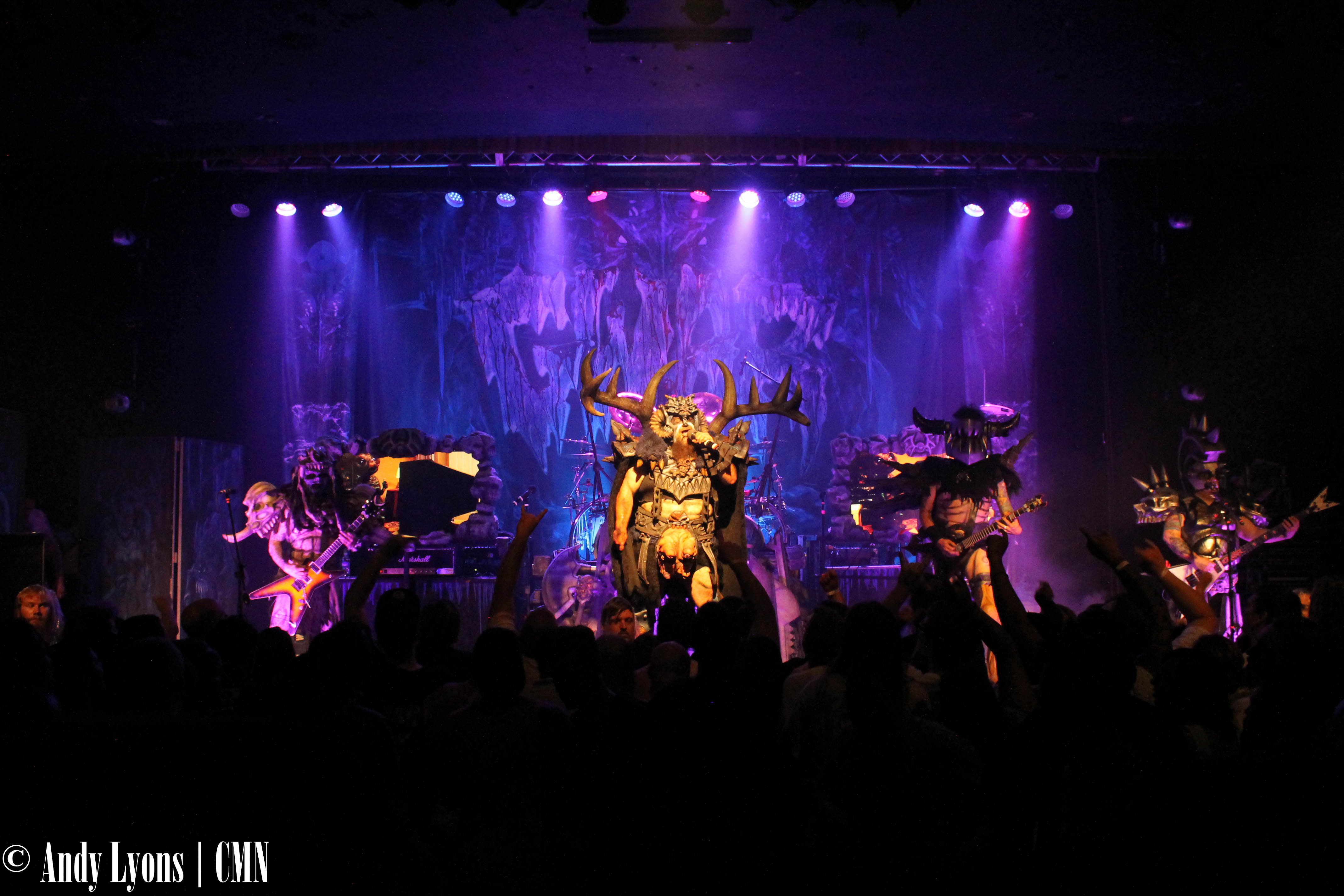 From the time Sasquatch-themed rockers Troglodyte hit the stage until Gwar finished hosing down the crowd with various liquids, the energy level only rose Sunday night at the Granada Theater in Lawrence, Kan.

While the Independence, Mo. based Troglodyte got the crowd ready for the musical onslaught, CMN headed to the back parking lot to chat with the vocalists for Butcher Babies, Carla Coates and Heidi Shepherd.

We last caught up with the band when they played at Aftershock in Merriam, Kan. last fall. In the time since, the band has toured the U.S. and Europe and released their second album, “Take It Like A Man,” Aug. 21.

Of the new album, Coates said the band had received a good fan response since the release and were waiting to hear how sales did during the first week. She also mentioned that the band was “super proud” of it, and Shepherd echoed the sentiment.

“We are happy with it, you know, this is an album we wanted to put out, an album we needed to make for ourselves too,” Shepherd said. “As an artist your art and your creativity helps you grow as a person. There’s a lot of songs on this album that are really emotional that are really close to, not just the two of us, but the entire band.”

When asked about the song “Gravemaker” from the new record, Shepherd said she had been talking about the track earlier in the day and the motivations behind it.

“We both grew up as kids who were made fun of because we were different when we were kids,” she said. “I was different, I wasn’t the classic Mormon kid who didn’t swear and went to church every Sunday. And she was a misfit kid as well. And we gravitated towards metal, and that’s where we fit in. Those were the kids that were nice to us. And it’s interesting now that we’ve grown up and still have those roots, we’re made fun of in the metal community because we’re different. We’re expected to be perfect at all times. We’re expected to be what the metal community thinks we should be, which is so bizarre thinking of how we were bullied back then by the outsiders and now we’re bullied by the insiders. It’s pretty fucked up if you ask me.

“Anyway, we were talking about that today and one thing that ‘Gravemaker’ is about is those emotions you feel when people are expecting you to be perfect,” she continued. “They want you to be a god, they want you to be flawless. And the song is about as people are expecting us to be that way they’re pulling us and ripping our limbs, they’re pulling us at all ends and it’s impossible. We’re just fuckin humans, we’re just like everyone else. My dad always told me when I was a kid, ‘everyone shits in the morning.’ We’re just like everyone else. And we’re all the exact same. Everyone has dreams and goals and aspirations in life and we decided to follow ours. That song is really, really close to us.”

Coates elaborated more on the motivations behind the new album, but compared it to the writing process of their first album, “Goliath.”

“The cool thing about this album, I think, in general is that with Goliath we wrote a lot about things that happened in our past, distant pasts,” she said. “With this album, not only did we do that and write about our childhoods, but we also had a chance to reflect on the last few years. Being part of a career that’s moving pretty fast, we were thrust out on the road and we haven’t really stopped touring. We have a lot of new emotions that we had yet to explore in written form. It’s been cool to write songs, ‘Gravemaker’ is one of them, ‘Thrown Away’ is another one of them that are directly relates to feelings we’ve just been navigating through the last couple of years, luckily we get to navigate through those feelings together.”

The duo went on to talk about tour life, mentioning that there was an announcement due soon for what the band will be doing after they conclude the tour with Gwar. As the pair went to get ready for their set, Troglodyte played on with many in the crowd singing along and headbanging to the music.

Battlecross was up next, and they didn’t disappoint. With shrieking guitar solos and rapid-fire drums, it wasn’t long into their set before the crowd was moshing at the Granada. And it was a beautiful, old-school style of moshing. Security was relatively lax compared to other metal shows of this caliber. For a lineup such as this, there would be a team of heavy guys waiting to catch crowd-surfers and disrupt moshers but Sunday night it was love of the genre that regulated the crowd. There were maybe a handful at the Granada, and the crowd was spot-on at self-regulating. As people fell, dozens of arms helped them back to their feet and the most surprising part, people moshed and it didn’t result in hurt feelings and thrown punches. It was glorious. Battlecross’ music is aggressive, and was the perfect primer for what was in store.

When Butcher Babies hit the stage, the crowd went ballistic. There was maybe two feet between the stage and barricade, and within seconds crowd surfers were sent stage front. The set was a blistering in-your-face compilation of pounding songs, accentuated by the dueling vocals of Coates and Shepherd. That sound is rounded out by pounding rhythms by drummer Chris Warner and bassist Jason Klein and shred work from guitarist Henry Flury.

The group is one of the highest energy in live music today. Coates and Shepherd are all over the stage, headbanging and jumping off risers. One of the best parts is the way they keep the crowd involved. For those up front at the Granada, that meant Shepherd standing with one foot on the stage and one foot on the barricade with the microphone in front of your face. Easily the best part of their show, they look like they’re having fun.

Gwar took the stage and immediately soaked the crowd in “blood” squirted from a man’s chest. It was Dave Brockie’s birthday, the late Gwar frontman better known as Oderus Urungus, would have been proud. Throughout their set, the band made fun of social media and consistently found ways to spray the crowd, whether it be through a snail looking creature or one of new lead singer Blothar’s four penises. The crowd was loudest when they were getting sprayed, and competed with the P.A. system for who was louder.
The night was one of the most memorable in the fact that it was a complete metal show, with all four bands putting on great performances. When asked to describe Butcher Babies in three words, Shepherd jumped on “totally fucking awesome” to which Coates wholeheartedly agreed. The show lived up to her sentiment.

To hear the full audio of the interview with Coates and Shepherd, click here.