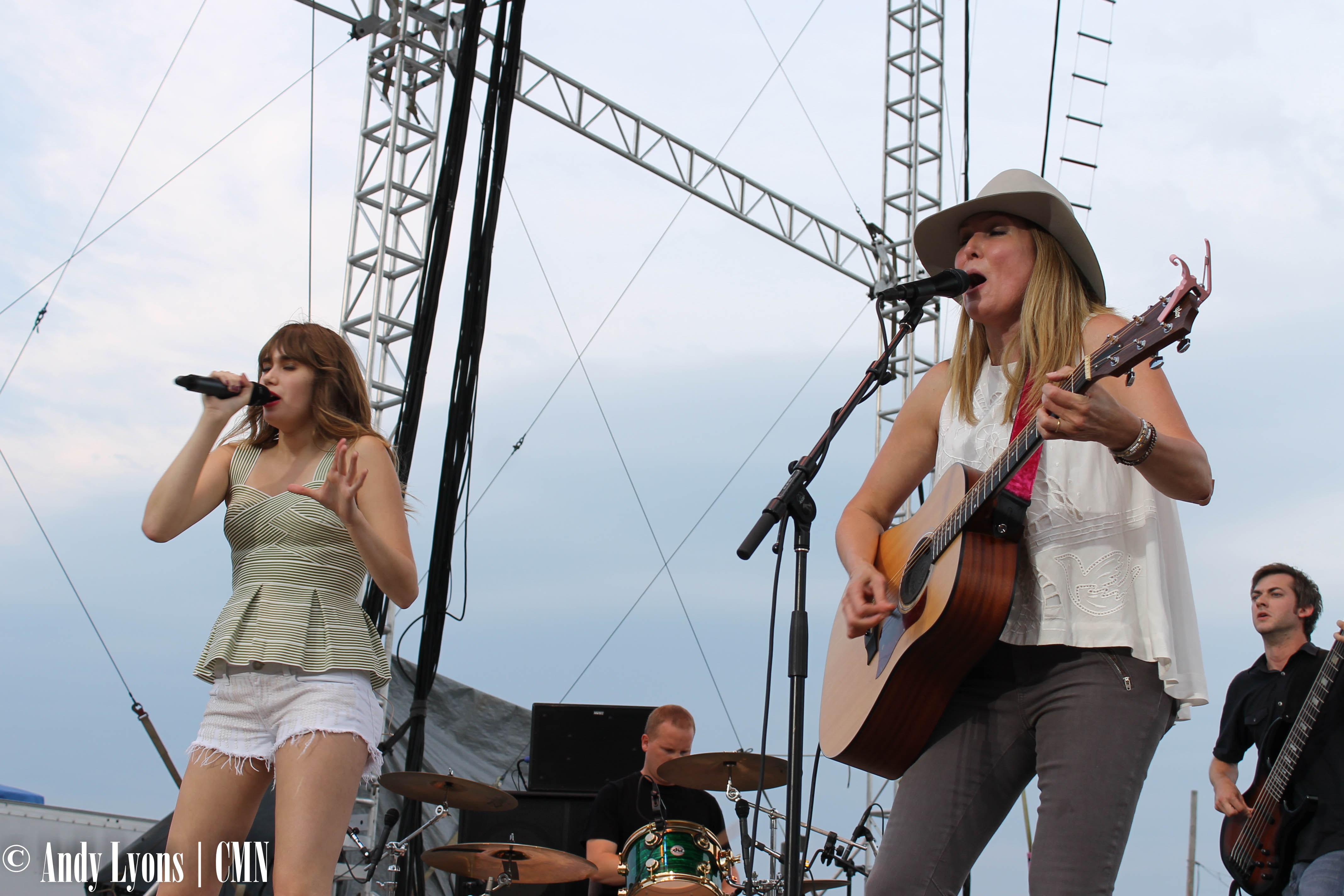 With the vocal delivery of Dolly Parton and the moves of Shania Twain, 18-year-old Kelli Jones is making waves for her band, Belles & Whistles.

They are a mother-daughter duo intent on making heartfelt songs like the old country days of Johnny Cash, Betsy Cline and Parton. Breaking away from a contemporary country sound dominated by songs about trucks, back-roading, drinks in hands, and shaking moneymakers, Kelli and her mother remain intent to make songs listeners can actually relate to, about real-life situations.

During the Missouri State Fair last week, Kelli and her mother Jaymie let CMN interrupt their dinner before taking the stage for an interview.

Jaymie was candid when describing their writing process, especially the song “Princess.”

“I think that we write all our own songs, either ourselves or with co-writers,” Jaymie said. “We’ve been writing a lot in Nashville for almost the last year. We try to really make our songs meaningful and have depth to them. That’s really important to us, as artists, to be saying something either different or new, or just something that is meaningful and not just flat. That song we have called ‘Princess,’ which is one of our favorite songs. We wrote it with Daniel Chistian, and Daniel’s playing guitar for us tonight. And that was Kelli’s idea about how her friends, there’s a lot going on in their lives in high school and they really didn’t share it with maybe the people they should be sharing it most with.”

“Well usually one of us comes up with an idea or topic or even a title and then we bring that to the other one,” Kelli said while locking eyes with her mother. “And then it usually starts from there. Mom is usually the one that starts playing the guitar and finding the chords and we both kind of write the melody. The lyrics, we really write those together. We’re a pretty good team when it comes to song-writing. I wouldn’t say it’s more, well some songs it’s more me or more mom.”

Jaymie continued to say the duo has started traveling to Nashville for writing sessions where the two work with a stranger for four or five hours and come away with new material, quite the different from their process back home in Nebraska.

When the band took the stage, Kelli showed she has what it takes by commanding the attention of the crowd with the voice and moves of a country music veteran. They’ve only been playing for three years, but Jaymie described her daughter as an “old soul” who was a natural on stage.

Kelli described getting into the music industry with a youthful excitement as she explained her journey with her mother. She started by going on the road with Jaymie’s old band and singing back-up. As she got older she was itching for a shot on stage and her mom trusted her to make the leap into singing for Belles & Whistles.

“I started singing backup for my mom right after I turned 14,” Kelli said while smiling at Jaymie. “We did that for a little bit before she let me become a duo. I always wanted to be a duo but she wasn’t quite sure about bringing me into this business at such a young age.”

“My mom and my aunt were in a band called Mulberry Lane. And I grew up backstage at their shows and watching them perform. It really didn’t seem weird to me that they were always singing or they were always doing shows it just seemed really normal. I grew up, I tried sports I really didn’t like sports. The only thing I ever wanted to do was be on stage and sing and perform.”

Jaymie described the relationship between her and her daughter as professional when it comes to the band. They bounce ideas back and forth and function as two people with a lot of love and respect for one another as they find their path in music.

When asked to describe themselves in three words, the pair had great answers for themselves.

“I am crazy, I am independent and artistic,” Jaymie said.

“Wow, I wanna hang around you, mom,” Kelli said with some sass.

“Uh, sarcastic!” Jaymie said of her daughter with a laugh.

Click here to listen to the entire interview with Belles & Whistles.