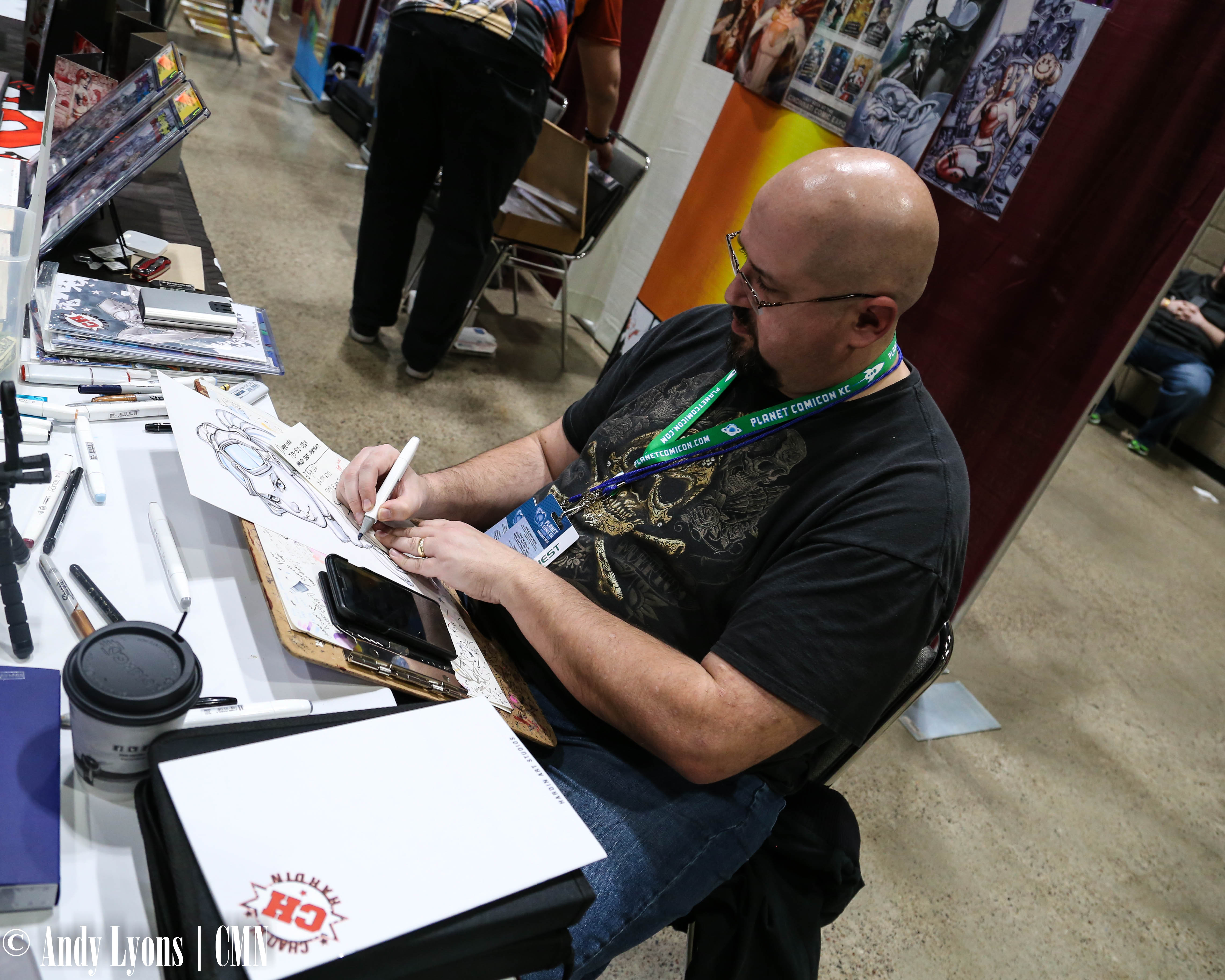 Comic book artist Chad Hardin has worked in the industry for more than 15 years with multiple projects for DC, DarkHorse, BooM! Comics, and Marvel. He is the artist behind DC Comic’s insanely popular run of Harley Quinn.

Last weekend at Planet Comicon in Kansas City, Hardin took some time to talk about his work on Harley Quinn and his plans for the future. Harley has been one of DC’s most popular characters since her inception on “Batman: The Animated Series” and Hardin has played a role in the current comic adaptation, which centers around the character’s life in Coney Island – a life away from Gotham City.

“It all started with Bruce Timm’s interpretation with “Batman: The Animated Series,” and that carried over to some of the initial comics,” Hardin said. “What they did with the movies was all on their own. It was really fun to work with Amanda (Conner).

“Amanda really did a lot of the work when it came to how she wanted Harley portrayed and I took a lot of my queues from her. But yeah we changed her outfit and her hair and everything almost every issue. And that was deliberate because who wears the same thing every day, unless you’re Albert Einstein or Steve Jobs,” he said with a laugh.

Taking the character away the usual tropes of Gotham City to her new home still has a lot of similarities, but Hardin put in a lot of work to ensure the panels set in popular spots in Coney Island and Brooklyn felt real.

“I grew up in Las Vegas, Nevada and going out to New York, I actually went to Coney Island and took a million reference photos, not just of Coney but of New York, Brooklyn Bridge, the surrounding areas,” he said. “But in my mind there’s not much of a difference between New York and Gotham. Obviously, they’re gonna share a lot architecturally. Growing up in Las Vegas everything has a neon sign and a flashing light so maybe that’s just unique to my perspective. But it was fun actually being able to go to some of these places where, even though we changed it and modified it, but had this basis in reality. I think there’s a lot of people who if they’re familiar with Coney will pick up on all the little nods that we did to local establishments and things like that.” 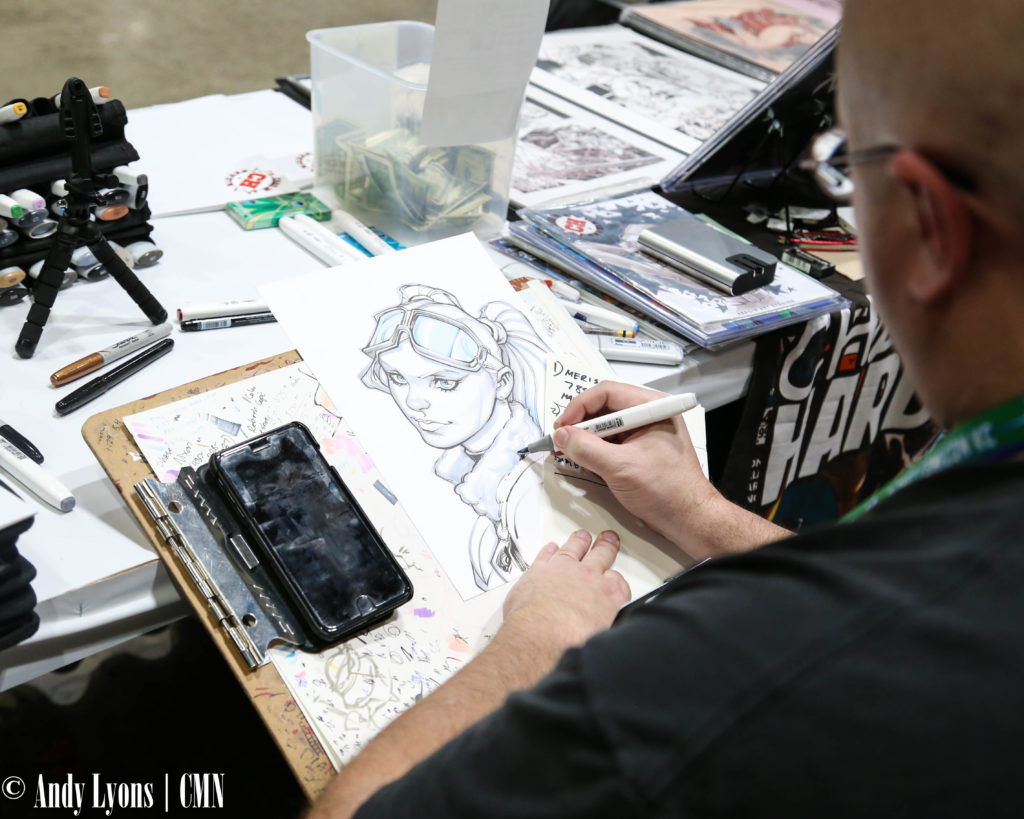 Throughout the run of Harley Quinn, there have been plenty of new characters introduced – ranging from Harley’s sidekick Bernie the Beaver to her new Coney Island family to classic DC characters such as Poison Ivy and Catwoman.

Hardin said he had a lot of fun working across the story arcs of the comic, noting the constant flow kept the comic fresh. For the “25th Anniversary Special” issue released last fall, the creative team had Hardin draw a double-wide splash page featuring all the characters Conner and Jimmy Palmiotti had introduced in the comic, a feat Hardin said took him four days to accomplish.

Currently, Hardin is changing his focus to teaching and creator-owned comics. He recently accepted a position as a professor of art at Utah Valley University and is working on getting a new comic off the ground.

“Temerity” will focus on a space mercenary duo and be a bit more family friendly than the Harley Quinn comics, although they will include fighting and violence.

“It’s basically like these guys are super lethal, warrior, mercenary, Taeru is like a space ninja and Naia is sort of like a weapons expert, guns and ordnance,” Hardin said. “But the thing about it is they have all these mercenary, fighting, tactical skills but they’re completely socially inept. It’s basically a little bit of a love story between Taeru and Naia but it’s the two most awkward people. It has a lot of that anime feel, but it’s good times. It’s good escapism, we don’t push any agendas, we’re trying to make it for as wide of an audience as we can.”

With the schedule change of teaching and working on his own project, Hardin said he plans to focus more time on his wife and children. He’s working on “Temerity” with one of his former students, Jemma M. Young, and the two plan to build a fan base through a new website launching this week and once they have enough content they’ll Kickstart issues of the comic and eventually a graphic novel.

Hardin said he’s still open to working for DC, as he’s done cover work for Teen Titans and others. With his new focus, he’ll have summers off but wants to focus more on teaching, his students, and his family. After 15 years working on a multitude of projects, Hardin is ready to focus on his own.

“After playing in somebody else’s sandbox for so long, you’re like ‘well what’s over here?’” he said with a laugh.