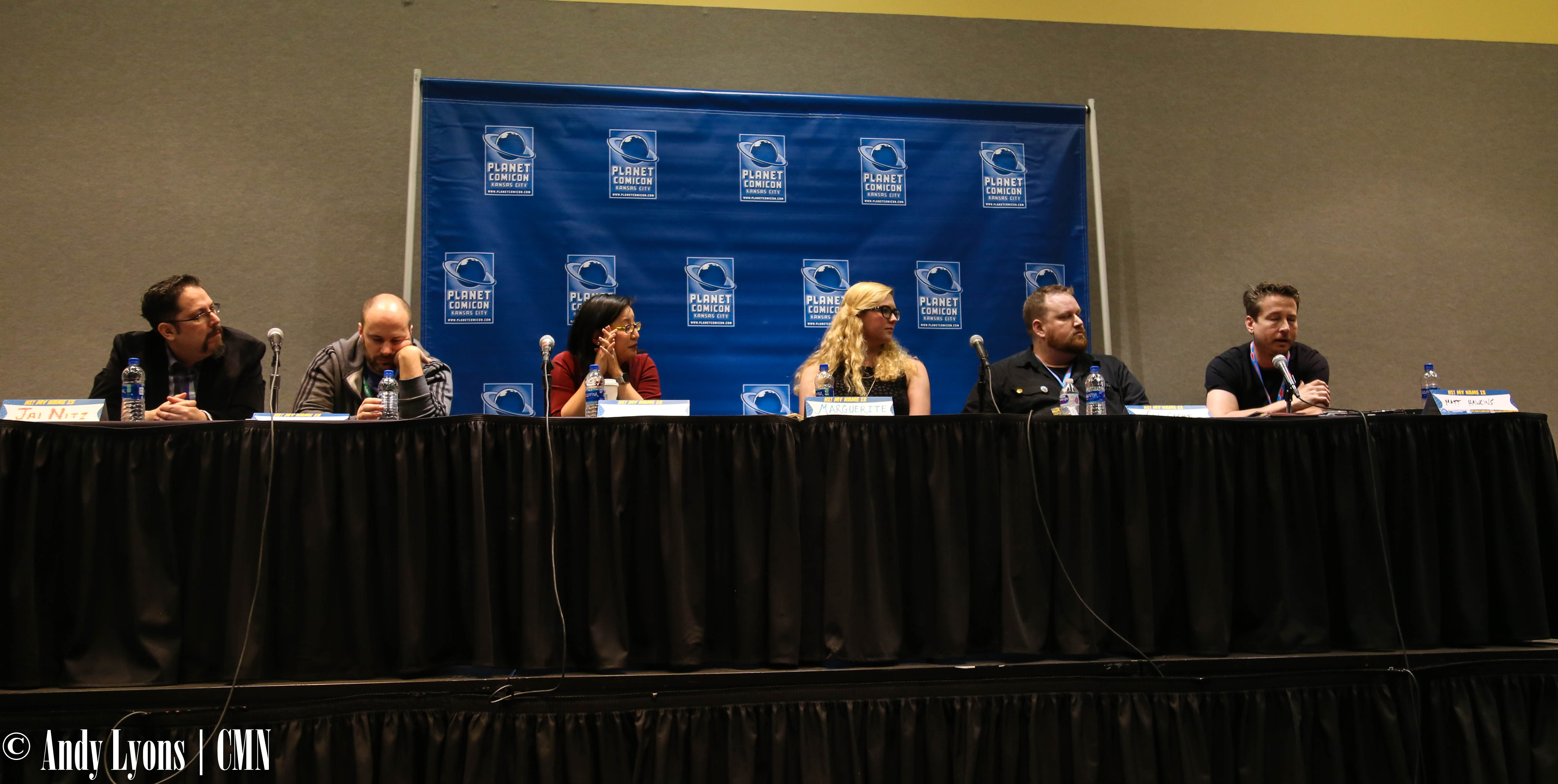 Comic writers share tricks of the trade at Planet Comicon

When it comes to design and overall story, comics require all who create them be on the same page, pun intended. It’s up to the writer to come up with a story, and the artist to draw out the scenes by interpreting that story and the writer’s intentions. When you can get an artist and writer who truly understand one another, then you can expect the end result to be fantastic. In order to achieve the right result, it takes a strong writer to start the process, and at Planet Comicon we got to sit in on a panel full of writers, who gave their insight into how they can transform their idea into the final product we all get to see.

Starting off the panel Nitz, who was the moderator as well as a participant, talked about his experiences getting started in the industry as a writer. He said he had asked several people for advice and talked about how Scott Lobdell and Steve Bissette had helped him out tremendously.

He asked the panel what they wish they would’ve known before they became comic book writers. Hawkins began by saying “For me, it’s about the emotion of the character. I get pitched so many projects, because I’m an editor too, and so many of them are high concept and have really cool ideas and the characters get kind of lost in it. I think if you sit back and think about what your favorite character is and it is usually because of an emotional attachment you have to them, and I think that’s really hard to write. I would also say to experience life. Go out and challenge yourself, don’t just sit in the living room and watch TV all day.”

Both Bennett and Cooke had similar responses, which was plainly do the work. “Stop saying that I can do a better whatever superhero, and start writing comics,” Cooke said. “Don’t just write one thing, because if you can write in different genres with a fluid voice that sounds natural, you’ll find work.”

Bennett added to it by saying, “I worked constantly on my prose and learning the skills so that when the opportunity presented itself, I was ready. [As a student in New York City] I knew how important this was to me, so I bailed on parties and I stayed home and worked on my craft. Also, make friends with your peers. Hang out with the people coming up in the industry and break through together. With all of those people giving and receiving advice, someone’s going to make it and they will be in a position to help you.” 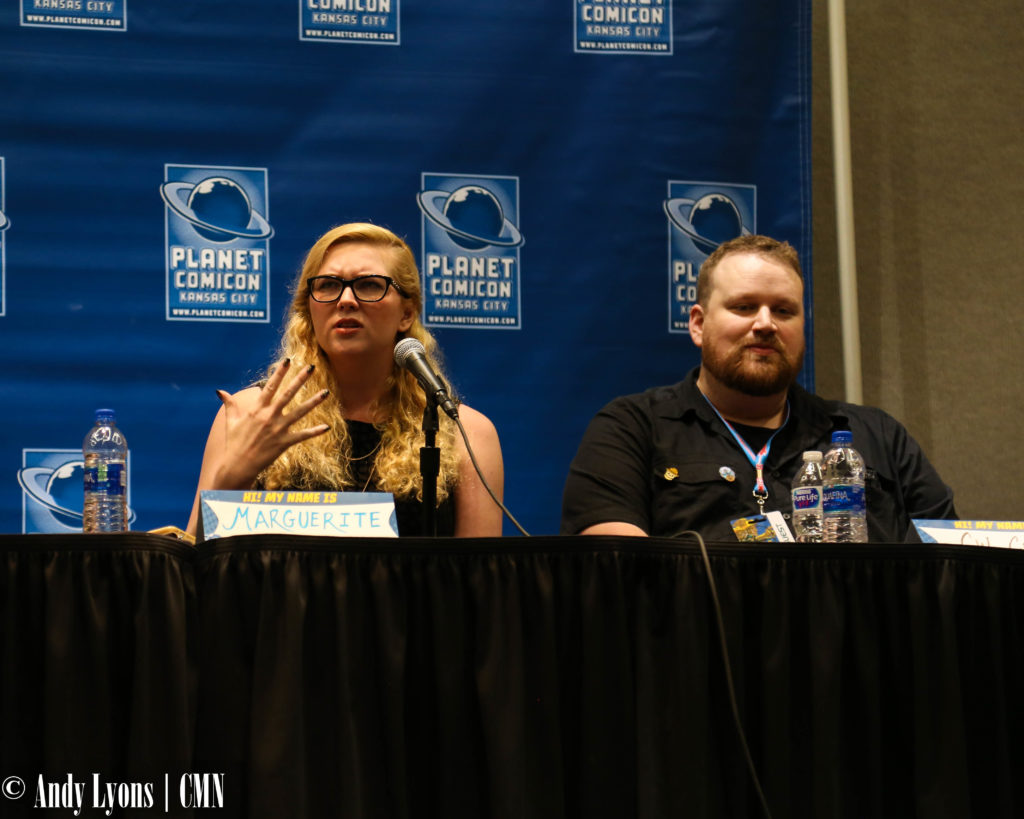 Marguerite Bennett shares insight with the crowd during the “Secrets of Professional Comic Book Writers” panel.

Chu had a different outlook on it because as she claims, “this is my third or fourth career and this is going to be it, because I cannot go to any other jobs. My advice to anyone not interested in writing is to try to take an interest in it, because I never thought that I would be a writer. I was trying to help my friend be a writer and I was kind of just sucked into it, so who knew that this thing is what basically made my life complete in the most horrible way possible. I thought I was going to be a physicist.”

Hawkins chimed in by saying “me too” when Chu mentioned being a physicist, because he has a Master’s degree in physics.

Chu continued by saying “I think the reason why I can write now is because of life experiences and maturity. I can do Poison Ivy having kids and pull it off credibly.”

King started off with an ode to his wife. “One of the most important things you can do is marry the right person, preferably a Midwesterner,” he said. “The best thing I ever did in my life was marry my wife.”

He went on to say “If I went back to myself as a kid, I would talk about how writing is a vocation. It’s something that you can learn, just as you can learn to be a lawyer or a doctor. You have to put in the hours to earn it.”

Another piece of advice came from Nitz, who said “I’ve met too many people who say ‘I have this idea, but I’m not going to tell it to you because I don’t want you to steal it,’ and I’m like if you have one idea, you are in the wrong business. I have had one idea that I got paid for that got right up to going to press and someone said, ‘that thing’s dead now, what’s your next idea?’ You have to be able to move on and find out what your next thing is.”

One aspect brought up was the relationship between writer and artist and how much or how little direction should the writer give to the artist. Everyone on the panel agreed there needs to be some direction, but not so much it stifles the artist’s creative nature.

King said, “What I do for artists is that I find out what are their wants in terms of their career. What’s most important to me, I mean, is that they draw what I want them to fucking draw, which I mean in the nicest way possible. If you have confidence in yourself as a writer, you want it to end up like you envision it, but you have to make compromises with the artist to get the best vision. You tailor their career goals to your scripts and then they’ll draw what you fucking want.”

“You create a relationship with them because you know that the artist, the colorist and the letterer are going to make everything you do look better and you want them all to like you and you want to take care of them,” Hawkins added. 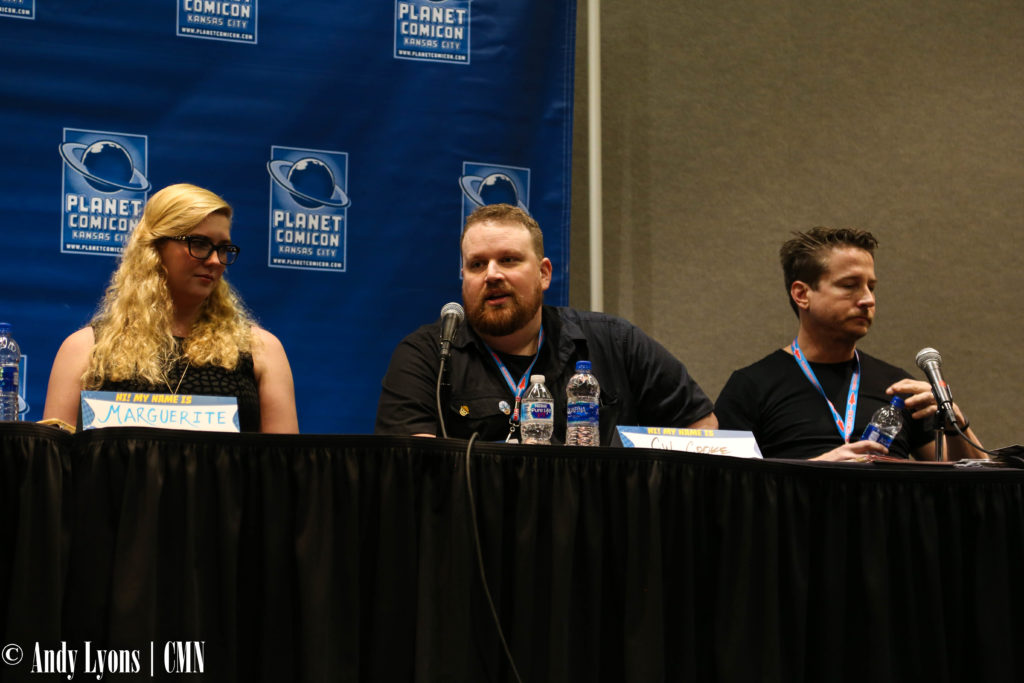 Nitz did a great job summing up why it’s important to help others. While he was getting advice when he was starting out he ended up realizing a key aspect.

“If anybody ever asks you for help, you have to help them”, he said. “We have enough gas station attendants who wish they were writers. We don’t have enough people who are doing what they want to do.”

This mentality of helping and compromising with your coworkers is key in order to succeed, because, as Chu put it, “when it comes to comics, helping one another out is very much a win-win situation.”

The insight the panel provided on a seldom seen aspect of the comic industry was enlightening and if you are interested in creating comics you should reach out for advice and critiques and, who knows, maybe we will end up interviewing you.