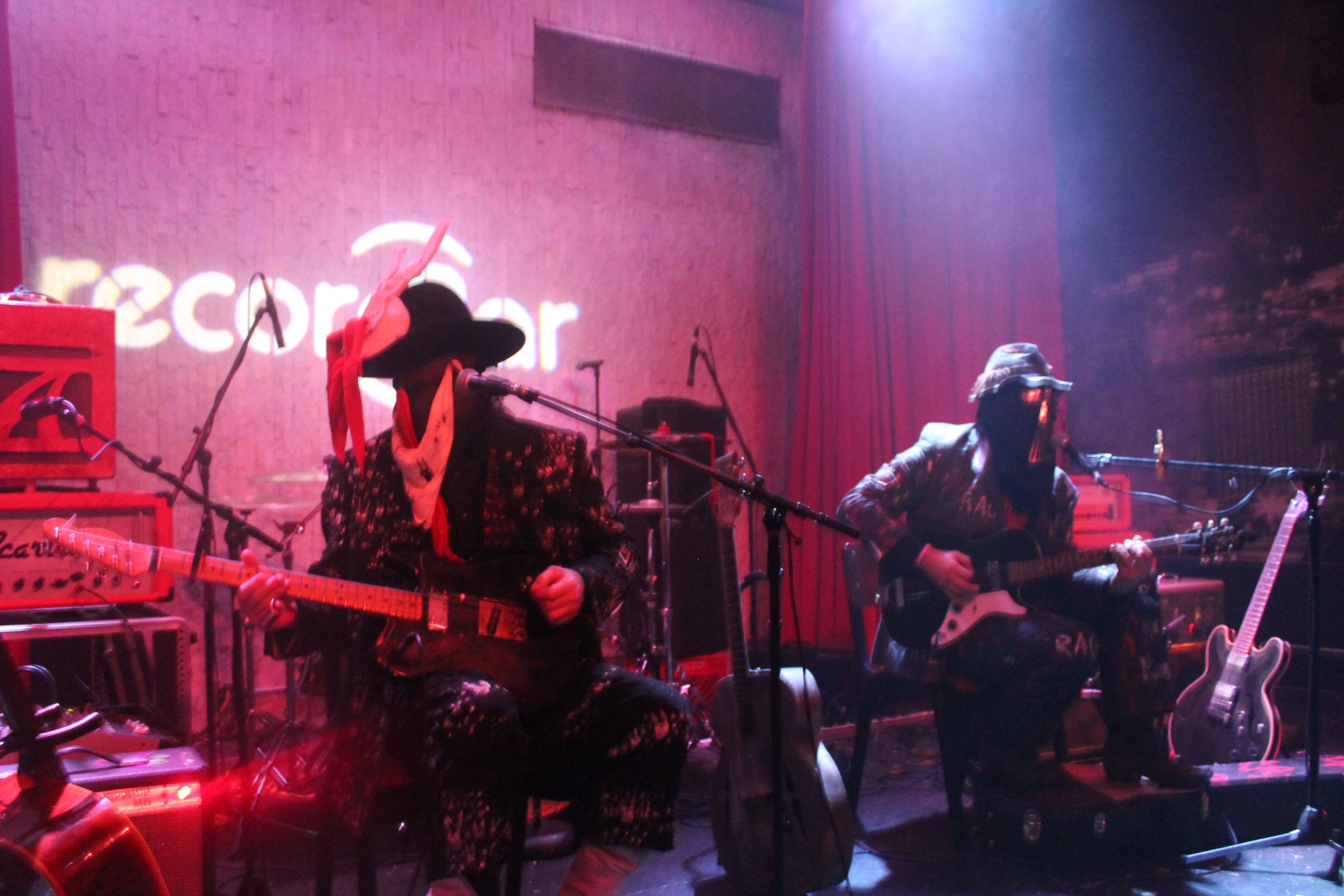 When Freight Train Rabbit Killer took to the stage of recordBar on Friday, July 20., it wasn’t an average show.

It was a special night for the eccentric doom blues duo made up of Kristopher Bruders and Mark Smeltzer — the night was the release party for their new vinyl seven inch record, making up the third part of the “Wake Snake Death Dance” series.

A video for the B side of the record was unveiled online the day before the show. The song, “Confinement,” is counterintuitive to how death is commonly viewed, as sad, somber and tragic. In it, Bruders sings of liberation and freedom found in death.

“Our bodies are prisons for our souls, Our flesh and blood are irons bars of our own confinement, But fear not, for our flesh decays, And death turns us all to ash and frees every soul,” go the lyrics.

Bruders sings the song with baritone vocals, invoking a straightforward and stoic feeling, reminiscent of Johnny Cash during the Rick Rubin produced American Recordings material at the twilight of his life. The lyrics behind the song were inspired by Bruders’ research on poetry.

“I think the idea behind the song, when I was writing it, was to offer up your soul and your physical body as two separate things, delivering the justice of casting someone’s wicked, awful being,” Bruders said.

“That’s really a lot of what death can be considered, as getting rid of a burden, shrugging off that mortal coil, and the understanding that it is this spring that we are living on, and we are like under tension, and there’s not like this relax time until our death,” Smeltzer said.

Bruders said a lot of Freight Train Rabbit Killer songs are related to death, yet a song like “Confinement” addresses the subject more literally. While the track is a death song with a metaphysical bent inspired by poetry, side A of the record, the song “Death’s Coming” is inspired by an event in Bruders’ life.

In 2012, James Garrett, who played harmonica in Bruders other band, Cadillac Flambe, died in a car accident.

“He kept telling me that he was going to die, his time was up,” Bruders said. “He was basically telling me death’s coming for me.”

The recent show at recordBar marked the first time these songs were played live. The songs from the “Death” record take on a sonic signature in their live versions that differs from the released studio version – “Confinement” live sounds more aggressive.

Bruders went into detail about the song’s altered auditory texture when played live.

“You know, you get excited,” Bruders explained. “Live is a completely different energy.”

Smeltzer chimed in, speaking of the reciprocal energy between the musician and the audience.
“You’re trying to nail the bottom in, and you see people dancing and realize if I play this in a certain way they are going to dance even more,” Smeltzer exclaimed.

The excitable audience was up front shaking it on down, as Freight Train Rabbit Killer wailed away, delivering fan favorites like “Old Man of the Mountain” and “Satan the Kingdom.” Here’s a duo with songs dealing with death, depression, suicide, police brutality and other topics that aren’t easily palatable for some, yet the audience response is one of joyous celebration.

Freight Train Rabbit Killer has created a world of cathartic musical psychodrama, and those who can come along for the ride have. They are not playing the blues in a traditional sense, yet they are using the sound of Mississippi Delta Blues as a sonic skeleton, injecting their own unmistakably unique flair.

If Robert Johnson met with a circa 1984 Butthole Surfers at the crossroads and did acid while conducting a séance, the result just might be Freight Train Rabbit Killer.

When I first saw Freight Train Rabbit Killer years ago, I wasn’t quite sure what I was witnessing, but with each show I’ve attended since, I’ve walked away with more of an understanding of the vision of Smeltzer and Bruders.

The world of Freight Train Rabbit Killer is one in which things that seem calculated can come into being in a haphazard and organic manner. The “Wake Snake Death Dance” record series is one example. A few months ago, a time that the members of Freight Train Rabbit Killer pinpoint to either February or March, they were working on recording the second seven inch of the series.

Bruders said during this time Brenton Cook of Haymaker Records, the Kansas City, Mo. based label putting out the records, had contacted Bruders with the suggestion of naming the series, in order to give it more structure.

The first record was simply titled volume one, and all of the songs on the record pertained to some sort of growing consciousness, and the single they were working on at the time contained songs about serpents, inspired by religion and mythology. Then the “Wake Snake Death Dance” project was christened.

Some of the themes and lyrics within the world of Freight Train Rabbit Killer are grim. Bruders is confident his audience understands the message and the music.

“I think people want an experience and I think people are fucking pissed off about what’s going on, and we write a lot about that,” Bruders declared.

For more, follow Freight Train Rabbit Killer on Facebook here. Listen to Mitchell Brown’s interview with the band in its entirety below: