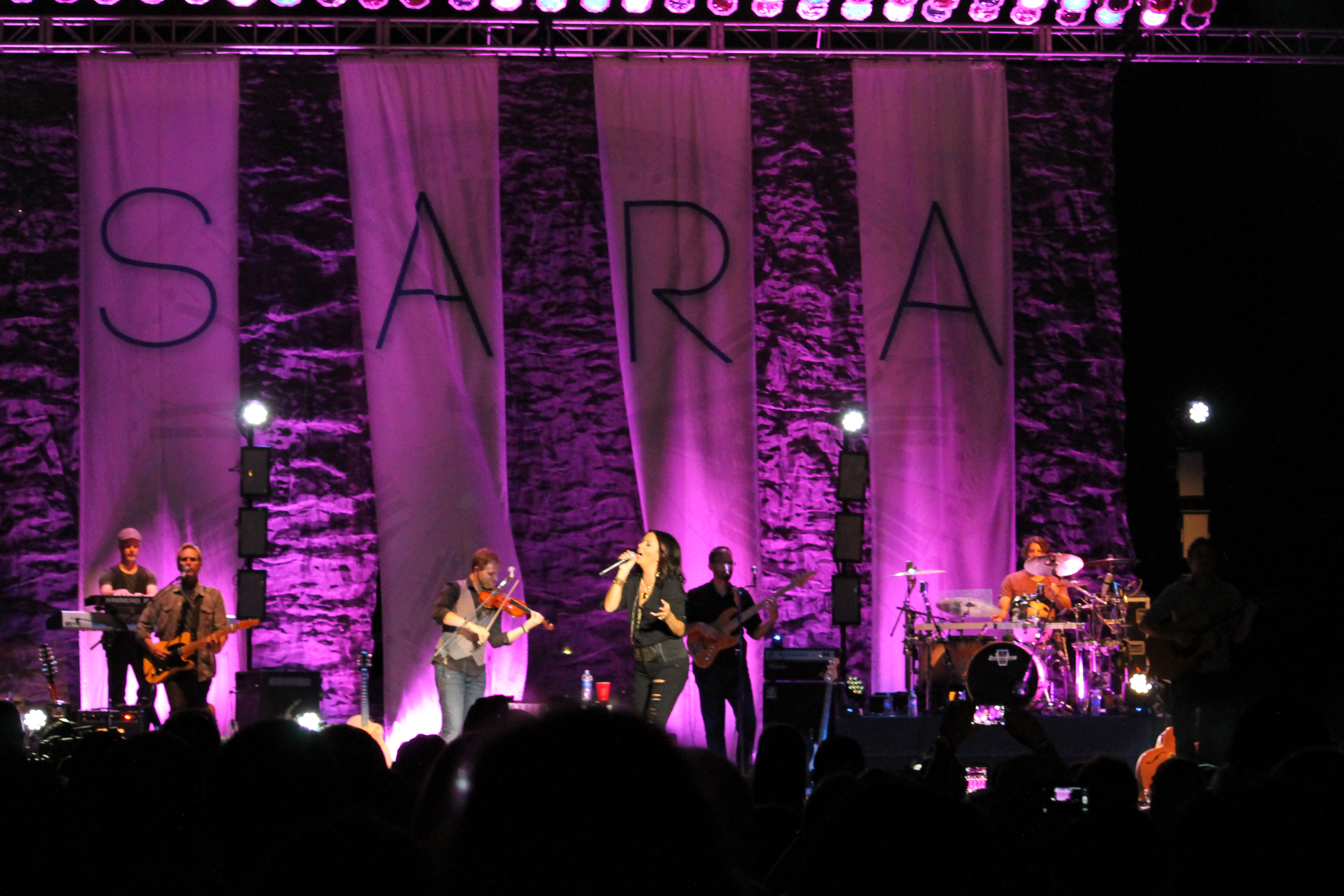 The Missouri State Fair got back to its country roots Saturday night as Joe Nichols and Sara Evans hit the Pepsi Grandstand. The fair filled with a more traditional country sound especially compared to Joan Jett & the Blackhearts the night before.

Nichols and Evans have the musical range to appeal to all sorts of fans. Nichols is most well-known for party hits like “Tequila Makes Her Clothes Fall Off” while Evans is more known for her emotional ballads such as “Born to Fly.”

As four-time Grammy nominee Joe Nichols hit the stage, fans in the track area were on their feet. Nichols’ most recent success comes from the single “Yeah,” which is the second consecutive No. 1 hit from his album “Crickets.” The song held the top spot on the Billboard Country Airplay chart for three consecutive weeks. In a phone interview last week, Nichols said his success with his latest album has changed the way he looks at his career.

“Everything has blown up in the last eight months or so,” Nichols said. “It’s a trajectory we haven’t been on ever. We’ve been on the same level for about 10 years and now I’m on the launching pad.

“It gives me a new outlook on everything, a fresh approach in the studio. I have a hunger for more success and to just do a great album, being around people with the same belief in me that I have. I’m glad to be with people who believed in me and wanted the same things I did.”

“Most Saturday nights are fun, the larger the crowd the better the energy,” he said during the phone interview.

The crowd hit his expectations head on. Fans were swaying to the music and singing along as Nichols prompted them to do throughout the set, holding his microphone out and beckoning the crowd with his hands to sing.

Early on, Nichols slowed down his set to talk about the current state of country music.

“Lots of country guys are rapping on their albums today, I figured I needed to put some in my show,” Nichols quipped as the crowd booed and snickered.

The biggest surprise of the night came as Nichols went into a country version of “Baby Got Back” by Heavy D. The crowd really seemed to enjoy it, and was dancing, singing, and of course shaking those “healthy butts.”

One of the most entertaining parts of the night was beach balls flying around the crowd. It seemed the balls only landed on unsuspecting victims, peppering them in the head or landing directly in their beer and splashing everyone around. It went a step further when a middle-aged guy wearing a polo shirt and boat shoes in the row in front of me drunkenly spiked balls in a random direction each time one came within reach.

Throughout Nichols’ set, the crowd got more and more amped. The area in front of me on the track had fans two-stepping to some of the faster paced songs. I overheard the three middle-aged women next to me talking about how they wished the chairs in the track area weren’t there so they could square dance.

For his last song, Nichols’ played “Sunny and 75,” ending with an extended jam session that contained some masterful guitar and drum work. The crowd gave him a standing ovation that lasted several moments.

The women in the crowd screamed in unison as the lights dimmed for Sara Evans. While the music is notably a bit more mellow than Nichols, the fans were relentless in dancing and singing along as Evans serenaded them.

Evans, who was born in New Franklin, Mo., kept her hometown crowd amped up as she played songs from her repertoire. The crowd was treated when she invited two of her sisters, Ashley Evans Simpson and Lelsey Evans Lyons, to sing an a cappella version of “In The Pines.”

It was truly a special moment – Evans mentioned she had some family watching her set from side-stage and had plans to spend Sunday in New Franklin. But catching three sisters singing harmony together was a very special moment that fans will not soon forget.

Early in her pop-driven country set, Evans played the duet “I Can’t Stop Loving You” with fiddle player Billy McClaran singing in place of The Fray’s lead singer Isaac Slade. McClaran and Evans had an undeniable connection singing the song together. It was really great to see them singing face-to-face.

The further into Evans’ set, the more the crowd was into the show. Couples were wrapped up in each other, dancing in the aisles throughout. Evans was constantly slowing down her set and talking to the crowd. At one point she talked about one of her more recent songs, 2010’s “Stronger.”

“I wrote this song for everyone going through a hard time and coming out on the other side… stronger than you were,” Evans said before playing the song.

Evans ended her set with a cover of “Everybody Talks” by Neon Trees. Her version sounds more complete than the original, especially considering she’s backed by a band with an electric guitar, bass guitar, mandolin, drums and fiddle. The fans were on their feet as the band walked off stage and fireworks began bursting in the air behind the Pepsi Grandstand.

I was pleasantly surprised by Saturday night’s show. Nichols revved the crowd up with his party-style hits and his traditional country sound. While Evans was a bit more pop-country and emotional than fit my taste, it would have been the perfect concert to bring a date to, illustrated perfectly by all the couples wrapped up in each other throughout her set.