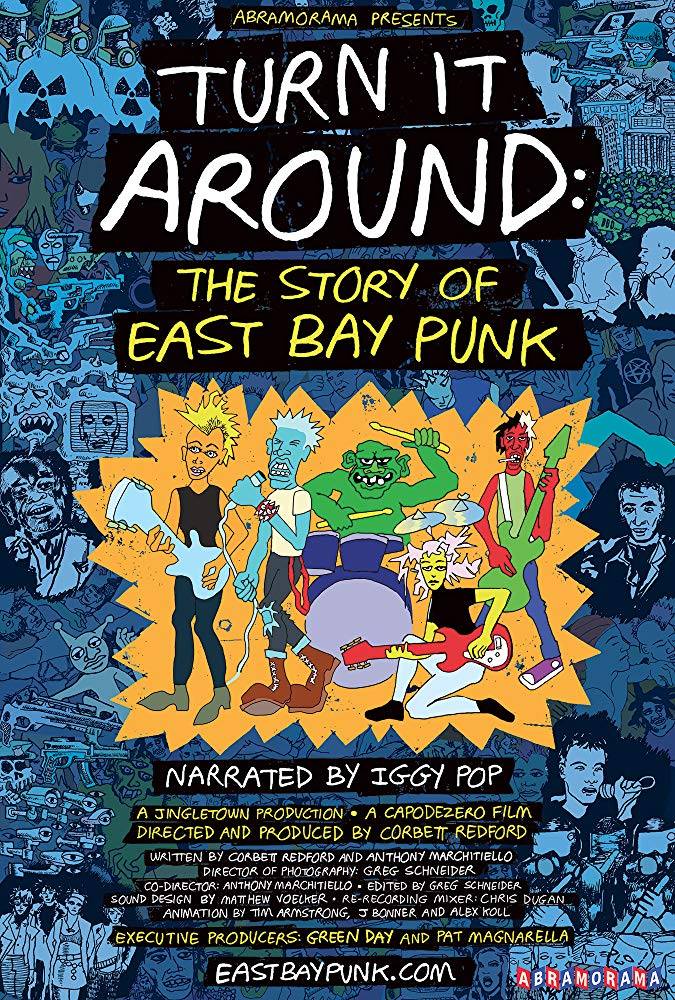 FILM REVIEW: ‘Turn It Around: The Story of East Bay Punk’

In 2006, a monumental documentary by the name of “American Hardcore” had a limited theatrical release. In 2007, it came to DVD. I bought it the week it came out, and I was floored, watching it about a half dozen times within the span of a couple days.

I liked it, but I didn’t realize how monumental of a movie it was until years later.

I’m of that mind that the noted omissions in the film led to more punk rock inspired filmmakers putting together documentaries focusing on elements that weren’t present or prevalent in “American Hardcore.”

More recently, a slew of hyper-focused, hyper-specific punk related documentaries were released, displaying a wide range of vantage points, from a singular focus on a city’s scene, such as the case with “Salad Days: A Decade of Punk in Washington DC” or a specific club/venue, like “Riot on the Dance Floor: The Story of Randy Now and City Gardens.”

“Turn it Around” centers on the East Bay, Northern California, Oakland, Berkeley, etc. As in Los Angeles in the late ’70s and early ’80s, the punk virus also grew in San Francisco, with The Avengers, The Nuns, Crime and Dead Kennedys.

Soon after, punk bands such as Fang and Special Forces rose out of Berkeley. The social/cultural backdrop of the East Bay is a noted story element in the film. Early on in the movie, footage of the Bay Area in the 1960s fills the screen. The area is shown as being a place where the radical and unconventional could find refuge and flourish.

The film goes through the years in succession with a retrospective focus. The segments pertaining to the early ’80s served as a prelude to the heart of the matter with “Turn it Around.” The movie really starts to pick up around 1987.

The late ’80s saw the birth of 924 Gilman Street and Lookout Records, with some of the label’s earliest output being records by Crimpshrine, Isocracy, Operation Ivy and later Green Day. The opening of Gilman Street marked a turning point. By 1986, much of the original spirit and spark of the hardcore punk scene of the early ’80s had dissipated and declined.

In the Bay Area around the same time, newer, younger bands were popping up, yet with no place to play, until an empty warehouse was turned into an all ages club at 924 Gilman Street.

It’s a venue that still exists today. Operation Ivy and Green Day are two of the most notable bands to come out of Gilman. Some of the most poignant moments of the film were those pertaining to those two groups.

Operation Ivy was an anomaly among anomalies, members barely out of high school, playing an infectious punk/hardcore/ska hybrid, lyrics dealing with socio-political issues, delivered with alarm- like urgency, although the group was only around for a couple of years, 1987-1989, releasing one full length album, one EP and a couple of compilation cuts.

The band is heralded as underground legends, and such reverence is partially related to the success of Rancid in the ’90s, as Rancid was formed by former Operation Ivy members Matt Freeman and Tim Armstrong.

In the film, when Tim Armstrong describes the details of Operation Ivy’s breakup, a heavy sense of loss is present in his voice, though he’s talking about events from around 30 years ago. He describes meeting with lead singer Jesse Michaels and expressing that things just weren’t the same anymore, and over a beer the decision to end the band was made.

This part is so relatable, we’ve all encountered some situation in life in which we had to reluctantly admit that something beautiful had come to end, and you were left to pick up the pieces and move on.

Collapse and rebuilding are reoccurring themes in “Turn it Around.” As the ’80s came to a close, and most of the first wave of Gilman bands disbanded, many members shifted, and more bands continued to form. Jeff Ott from Crimpshrine moved on to start Fifteen, and Jason Beebout from Isocracy started Samiam.

An even more seismic shift in the scene happened circa 1993-1994, the time in which Green Day went from underground punk rock heroes to corporate level rock stars, complete with chart success and video rotation on MTV, and not everyone was happy.

There is something seemingly counterintuitive about the punk scenes of yore – the greater, expanding success of a band was often met with suspicion and derision, not out of jealously, typically, but a backlash due to the idea that such a move was seen as a betrayal of the core values of a counterculture community.

The detractors of said bands moving to major labels and the members of bands that signed to majors are given equal time in the documentary, which comes off as a point vs. counterpoint dynamic without hostility or acrimony.

A sense of raw, heartfelt emotion is present when Mike Dirnt, bass player of Green Day states he wasn’t going to spend the rest of his life cooking fish for a job. An opportunity to make a living playing music, while simultaneously reaching a larger audience, was presented, and he went for it.

The rise in popularity of Green Day in 1994 marks the conclusion of “Turn it Around.” It was contextualized as a turning point, the end of an era, yet not the end of an independent punk scene in Berkeley.

As the movie drew to a close, it’s acknowledged that the do it yourself spirit continues to thrive, and it’s something that can thrive anywhere.