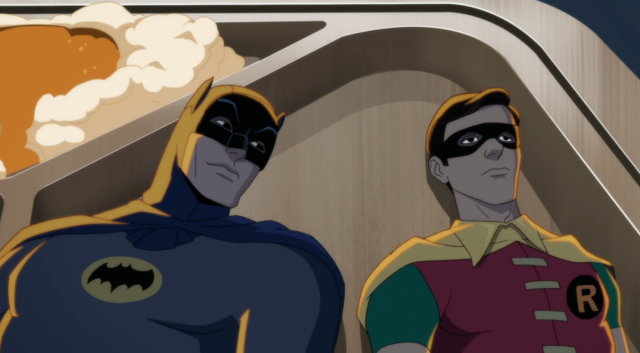 Last week a trailer hit the Web that left me surprised and pleased. It was for an animated feature titled “Return of the Caped Crusaders.” The movie is due for release in the fall and reunites Adam West, Burt Ward and Julie Newmar, respectively providing the voices of Batman, Robin and Catwoman. Upon seeing the trailer, I thought “holy retro nostalgia Batman.”

The trailer amounted to a cheap chuckle, with Batman and Robin tied down to a life-size TV dinner tray on a conveyer belt, moving closer to impending doom. All of the classic camp of the 1960s era “Batman” TV show was on display in animated form. I couldn’t help but wonder if the reception of the “Batman: The Killing Joke” animated film somehow influenced the creation and promotion of “Return of the Caped Crusaders.” One of the draws of the “Batman: The Killing Joke” movie was the reuniting of Kevin Conroy as the voice of Batman and Mark Hamill as the voice of the Joker, and “Return of the Caped Crusaders” pairs familiar voices together again.

Coming back to fond, familiar memories is almost always comforting. Nostalgia is often based on a desire to return to sunnier days. The return to the happy place could be the original 8-bit Nintendo games or it could be a can of Surge soda. The recent wave of ’90s nostalgia happens as many millennials are settling into young adulthood, but who is the target audience for a new animated feature that harkens back to 1960s “Batman?” Is it Baby-Boomers? I don’t think so, even though a small percentage of Baby-Boomers might watch it. I think the target audience in mind is probably made up of 20-somethings and 30-somethings who grew up watching “Batman” in syndication in the ’80s and ’90s.

A classic is able to transcend generations. I wonder if this particular serving of revamped nostalgia will be met with acclaim upon release. Or will it end up being a case of going to the well one too many times and attempting to update a classic that should have been left alone? Dedicated Batfans will have to wait and see.