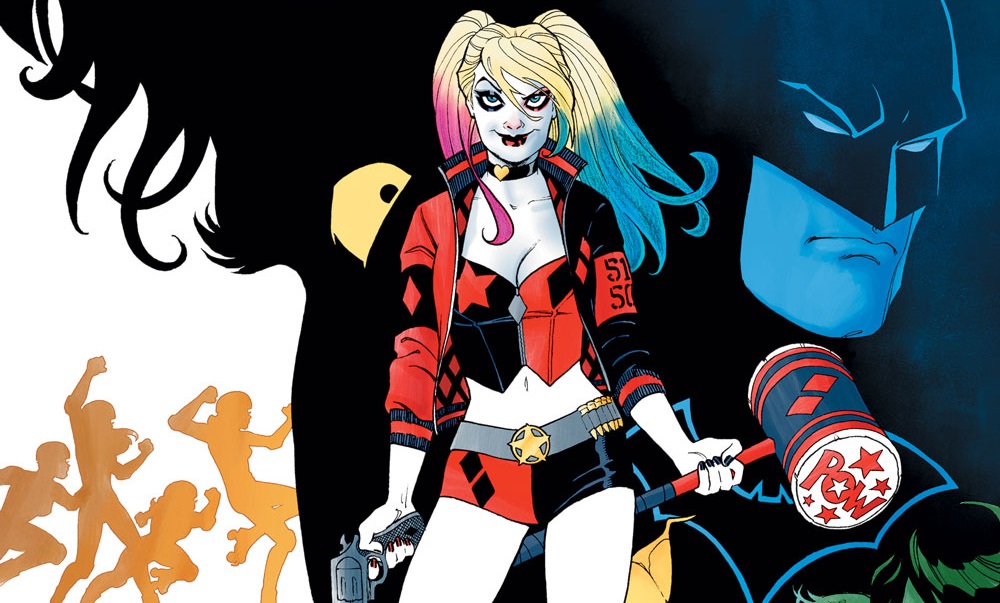 The new Harley Quinn: An evolution of comics and film

Since appearing as the Joker’s sidekick in a 1993 episode of “Batman: The Animated Series,” Harley Quinn has become a fan favorite. With appearances across different formats including video games and graphic novels, Harley will be making her big screen debut next month in “Suicide Squad” portrayed by Australian actress Margot Robbie. Harley has also had a run in the DC Comics comic books as part of the company’s DC52 catalog, which is being reset this summer as part of an over-arcing series titled “Rebirth.”

CMN recently chatted with Harley Quinn artist and writer Amanda Conner at Planet ComiCon in Kansas City, and was able to email questions about the series to creators Conner and Jimmy Palmiotti about how the series has gone and changes with the launch of “Rebirth” and debut of the “Suicide Squad” film.

In the comic series, Harley has taken residence on Coney Island, located in the New York City borough of Brooklyn. She has a new storyline adjusting to real life with a part-time job as a psychiatrist and has frequent visits from fellow DC villain Poison Ivy. Through her journey, she ends up in a fist fight with Joker at Arkham Asylum back in Gotham City. Palmiotti dished on how far Harley has come since her days as Joker’s on-gain off-again love interest and side kick.

“New love interests, more confidence for the character and the ability to show there is much more to the character than meets the eye or being the product of a relationship,” he said. “The Joker is still there, in her head, but she has moved on and as you will see in the newer books coming, the Joker still hasn’t.”

Many characters across the DC storylines are getting changes with “Rebirth,” but for fans of the Harley Quinn DC52 run, Palmiotti said not much is changing.

“She found a new home and new supporting characters living in Coney Island and we spent a lot of time focusing on her personality, her personal goals and gave her some interesting responsibilities such as being a part-time psychiatrist, part of a roller derby crew and a landlord of two buildings in Coney,” Palmiotti said. “Harley was born in Brooklyn, so it made sense to bring her back. Let’s face it; growing in here gives one a certain charm and strength that’s hard to find anywhere else. Yeah, that’s the Brooklyn boy talking.”

When it comes to the convergence of different platforms, such as DC’s comics and movies, Palmiotti made a point that not every medium can portray a story in a certain way. While in the comics, Harley had a makeover that made her hair match that of Robbie’s portrayal in “Suicide Squad.” However, each entity should be able to stand on its own.

“From what we have seen and heard, David Ayer, the director, is a fan of our series so we trust he looked at that and the past versions of Harley and created an amalgam that can work for film,” Palmiotti said. “The biggest mistake is thinking that what works in comics should be exactly as is in a movie and this is not true. These are two different mediums and the key is finding the delicate balance. We have faith that they found this and look forward to seeing it soon.”

Conner had some insight into writing a character who lives in a real-world place as storied as Coney Island versus life in fictional cities such as Gotham. Through the Harley Quinn comics, fans have seen the character evolve from a silly sidekick character into a fierce villain and then into somewhat of an unlikely hero in the DC52 run.

“The difficult thing about writing Harley is you have to always maintain a delicate balance between humor, action and flat out violence,” Conner said. “We have a better grasp of that now after writing her for a few years, but at first, we would get a lot of red flags from our editors telling us we went too far. In a way, this is a character that demands we go ‘too far’ so we still get them now and again and deal with it. The book is all ages, but we push the envelope when we can.”

Throughout the run there have been appearances not only by Ivy, but also by different DC heroes such as Power Girl and Batman. Conner offered some insight into finding the motivations behind Harley’s character.

“We always have the tag line ‘what would Harley do’ going while we break down the plots of the books and that is natural for any writer to do after writing a character for a few years,” Conner said. “While we do this we also understand that there are multiple personalities going on at once in Harley and the story can, at any moment, go in a totally different direction, always keeping the book and the character interesting. This isn’t like writing Batman or Superman on any level.”

For more from Palmiotti and Conner, visit PaperFilms.com.