LATEST NEWS
11:05 AM
Home Entertainment “Punk” explores the birth of a genre 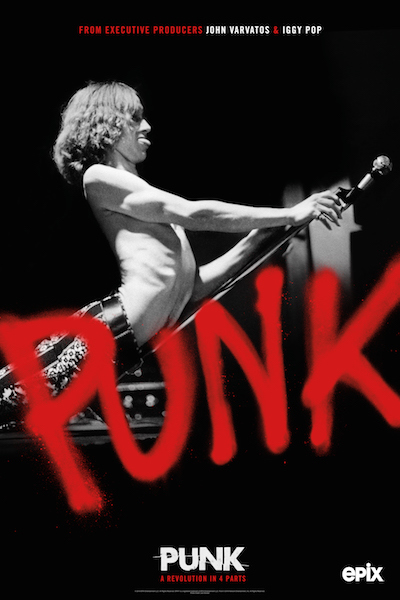 “Punk” explores the birth of a genre

Punk rock documentaries are my thing – and have been since I was a teen. It all started with “The Decline of Western Civilization” film. From there my interest grew, I will watch just about any documentary pertaining to punk music and subculture, from “Another State of Mind” to “American Hardcore.”

The subject never gets stale for me, it can be explored from so many angles, from the hyper specific to the general overview. An overview of punk rock, presented in a linear timeline form, is what is found with the new Epix docu-series titled “Punk,” produced by punk legend Iggy Pop and designer John Varvatos.

In the beginning, there was Jim Osterberg, rechristened Iggy Pop, as he went on to form the Stooges along with Ron Asheton, Scott Asheton and Dave Alexander. The first episode of “Punk” starts the story off in Detroit in the turbulent late 1960s.

From the Motor City came industrial strength rock n’ roll, a potent, powerful sonic explosion that would end up altering the face of music, though initially dismissed or ignored by a great many. It took time for much of the world to catch up to the sound.

The MC5 and the Stooges were the foundations punk was built upon, often now referred to as “proto punk.” They soaked up influence from the garage rock that had come before and injected heavy shots of adrenaline and amplification.

While Iggy Pop was “bringing the blues to suburban juvenile delinquency,” MC5 fashioned themselves as hard rocking revolutionaries, with a manifesto that included a declared allegiance to “dope, guns and fucking in the streets.” Much of the band’s political image was the creation of John Sinclair, the MC5’s manager. Although the MC5 were at the 1968 Democratic National Convention, playing outside, as a form of protest, they were not affecting political policies – their liberation was via hip-shaking, earth-quaking power chords.

The sheer raw power of their music is communicated in this episode. The impact is illustrated by hearing fans who also happen to be known punk luminaries opining about the band. Henry Rollins, Jello Biafra and Keith Morris talk about how they were affected by the MC5’s music.

The enthusiasm expressed as they speak is like whenever your friend had just bought a record by his new favorite band, and he just had to tell everyone at the lunchroom table about it the next day.

This enthusiastic commentary is a testament to how remarkable said music was – so many years down the line, men in their 50s and 60s are speaking about it as if they are wild eyed teens, experiencing the initial introduction all over again.

If the seeds of punk were planted in Detroit with the MC5 and the Stooges, greater growth happened a few years later in New York City. The docu-series shifts from the Motor City to the Bowery, Lower East Side in the mid ’70s, CBGB, the New York Dolls and the Ramones.

The backdrop of New York itself in this era becomes an essential part of the story. The urban blight and decay fed a creative energy, springing fourth out of the void.

The episode also explores that the scene at CBGB was off the beaten path, and the musicians who were part of it had room to grow and develop without a greater sense of pressure, talk of honing their craft without massive attention, even though some (i.e. Talking Heads and Blondie) would later find themselves in the spotlight gaining worldwide fame and acclaim.

The Ramones and the New York Dolls were the key focus (and rightly so). They are legendary and their music helped to shape both the sound and aesthetics of punk. The Ramones’ self-titled debut album became the template the British punk bands used to build upon.

A more obscure name and face I wasn’t expecting to see was Wayne/Jayne County. With punk documentaries, it’s not a surprise when Henry Rollins shows up.

Even those with only a rudimentary, passing knowledge of punk are familiar with the Ramones and the Sex Pistols. Bring up Wayne County & the Electric Chairs, you’ll probably be met with blank looks. But Wayne/Jayne County was there in those early days and provides insightful and humorous commentary.

The episode ends with a focus on the unraveling of the MC5, the Stooges and the New York Dolls, but the end of a few bands that helped to kick start a musical movement did not mark the end of punk.