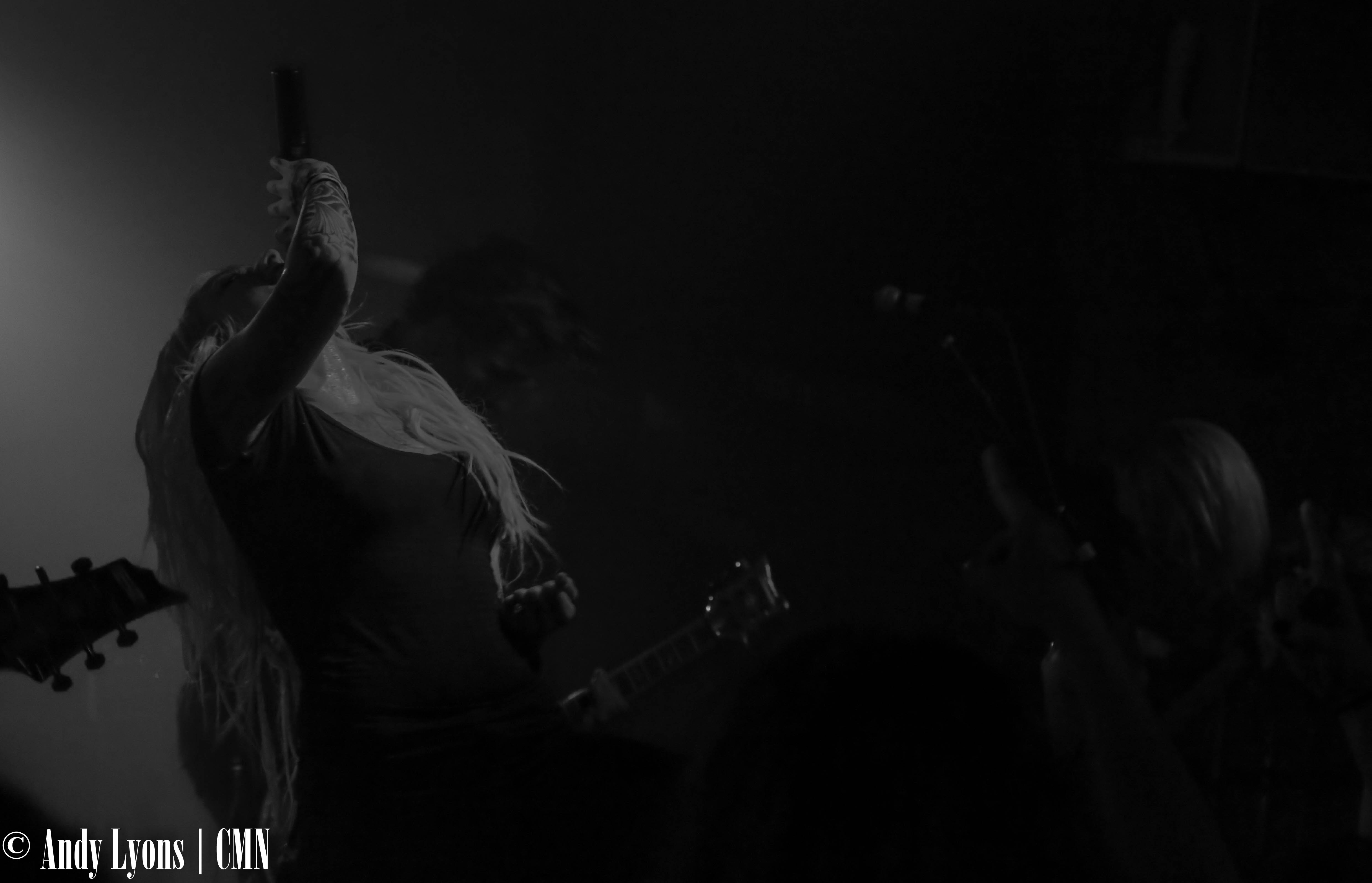 Stitched Up Heart make their mark with “Never Alone”

Rock fans around the U.S. are in for a treat when a 15-passenger van sporting a Papa John’s car topper is spotted pulling into town.

While pizza may not be on the menu, up-and-coming rockers Stitched Up Heart are sure to deliver. The band has been touring non-stop in 2016 in support of their first major album, “Never Alone,” debuting Friday, June 17.

The group just finished five weeks as support on Lacuna Coil’s “Delirium World Tour” and have kicked off the next leg with Pop Evil through July and continuing on with Gemini Syndrome through early fall.

Vocalist Mixi took some time before a recent show at the Outland Ballroom in Springfield, Mo., to chat with CMN about life on the road. Touring as support for legendary rockers Lacuna Coil had a big impact on the band.

“Some of us have been fans of Lacuna Coil since we were like 16 years old,” Mixi said. “To be able to play with them for multiple shows and to get to know them, they’re beautiful people, beautiful artists. We love them, I cried a little bit after it ended.”

That admiration and respect for the veteran rockers also translated into a learning experience for the members of Stitched Up Heart. The group was founded in 2012 and is no novice to touring, but working with bands like Lacuna Coil has helped them.

“You’re always learning,” Mixi said of the group. “We’ve grown tremendously just from going out with bands. We did it DIY for three years touring on our own where we were the headliner and we’d bring even smaller bands out with us. They were learning from us but we weren’t really learning. So when we get to do these direct support slots we get to see really good, professional talent and we’re very inspired and we learn from everything. What to do, what not to do, we learn everyday a new thing.”

The band keeps going, making it from stop to stop in a massive trailer-toting 15-passenger van crowned by a Papa John’s car topper.

“Somebody in Ohio decided to put it on our van and we thought it was funny so it’s just been there,” Mixi said. “We deliver pizzas on our spare time, you have to call ahead.”

It’s not all fun and games though; the van has an attitude of its own.

“We need an upgrade,” Mixi said of the ultimate delivery vehicle. “It’s six people in a 15-passenger van, the air conditioner broke. We went to fix it three times, no AC driving in summer, dying. Losing some water weight, that’s kind of nice… It’s paying our dues.”

CMN first caught Stitched Up Heart live during their tour with Lacuna Coil, and for both shows the band was impressive. From the time they hit the stage they come out high energy, rocking crowds on their heels. Fronted by Mixi, whose diminutive size is deceptive, all five members work fans into a frenzy. Guitarists Merritt Goodwin and Nick Bedrosian along with bassist Randy Mathias are all over the stage, jumping off risers and pointing at members of the crowd. Even drummer James Decker gets so into the set he stands behind his kit, seemingly for more weight behind his strikes.

The band, like so many others on the Century Media music label, follows a formula where the band carries a heavy sound with a dynamic female vocalist with a wide range, able to sing haunting melodies but with enough timbre to belt out screams and growls. The music behind Mixi’s vocals shines both live and on the band’s debut album.

The vocal range both live and on the album is huge, giving the band a depth and the ability to bridge rock genres from radio-friendly melodies to a heavier, grittier edge metal fans can cling to. But those highs and lows take their toll on the vocalist.

“It kills me!” Mixi said. “I used to not really care or take care of my voice, and I’ve learned. I didn’t take any vocal lessons or anything before I just kind of developed my own thing. I started taking vocal lessons, started to learn the proper ways of doing things and the not so proper ways, just how to maintain your voice on the road, especially if we’re going to be on the road all year with no days off.”

Mixi said she enjoys being part of a recent movement in the rock genre toward female-fronted bands.

“I feel like there are movements that happen in music,” she said. “Like the hippie phase, the 80s hair metal and glam and all that, and then the 90s grunge, and I feel like right now it’s like this female-fronted heavy rock, some metal elements to it, that has been taking over the scene. I am glad that I get to be part of a movement that’s women-inspired and empowered and hopefully it will empower other younger generation girls to start picking up a guitar.”

When coming up with the setlist, Mixi said the band picked seven songs the group liked best and ran with it. The band’s upcoming album will have 11 songs on the U.S. release. They picked their favorites for the live set and chose to leave some out because they’re more emotional and the band felt they work better left on the record, according to Mixi.

When it comes to her favorite song, Mixi said she likes to switch it up.

“I change my favorite song all the time,” she said. “It’s usually the newest one I’ve written. ‘I Can’t Breathe’ is my favorite right now and it’s one we don’t play live. ‘Event Horizon,’ we just released that on its own as a single. ‘Monster’ is really fun to play – super high chorus so it’s crazy to sing but there’s so much energy that we feel it and the crowd feels it and it’s a really good time.”

As a whole, “Never Alone” feels like it could be the third album for any veteran band in the genre. The songs fit together like a concept album yet each song stands on its own. From opening track “Finally Free,” Stitched Up Heart showcases they are capable of hitting a myriad of highs and lows across the board. Mixi’s vocal delivery brings the melodies and screams and packages them in a way that’s not overly abrasive but showcases the singer’s talent.

Second track and hit single “Monster” kicks up the pace, more of a groovy song with heavier riffs and a pacing that can get headbangers rocking out – most notably at the breakdown with Mixi’s vocals distorted and Decker’s drums hammering the song into completion.

The fourth track on the album, “Event Horizon,” kicks off with a slow build and then the guitars thunder in to really ignite the track. It’s a more radio friendly song, with high melodies anchoring the song.

The band really shows their softer side with seventh track “Now That You’re Gone.” The song really stands out from the rest of the album because of its genre blend. Acoustic guitars and a poppy vocal delivery make it seem like the song could show up on a pop country station until the chorus hits and it switches into a metal song. The dynamic is completely surprising, and really showcases they are everyone’s band, fans of a multitude of genres are bound to jam this song.

The same can be said for the ninth track, “Bleeding Out.” The vocal range really shines on this track, the slowed-down pacing really allows the song to pierce into the psyche of listeners. The song is a definite break from the heavier sides of the album.

Album closer “I Can’t Breath” is huge. The vocal delivery on the track is reminiscent of Amy Winehouse – the track kicks off with a sullen piano before exploding into a guitar riff. The up and down of the song is surprisingly catchy. The riffs will grab fans of 90s metal such as Korn by the ears, but with a fresh twist only Stitched Up Heart can deliver.

The album is a fresh take on a genre that tends to stagnate as bands find their sound and refuse to veer away or evolve. It offers a range of genre and track-to-track never bogs down with songs that sound the same, the mixture of ranging vocal delivery and fluctuating musicianship keeps the entire album fresh. It’s one of the best hard rock albums of the year, and surely a sign Stitched Up Heart has a bright future in the rock world.

“Never Alone” debuts June 17 via Another Century Records. Available through iTunes and Amazon. Follow Stitched Up Heart on Facebook here.

Full audio of our interview with Mixi: