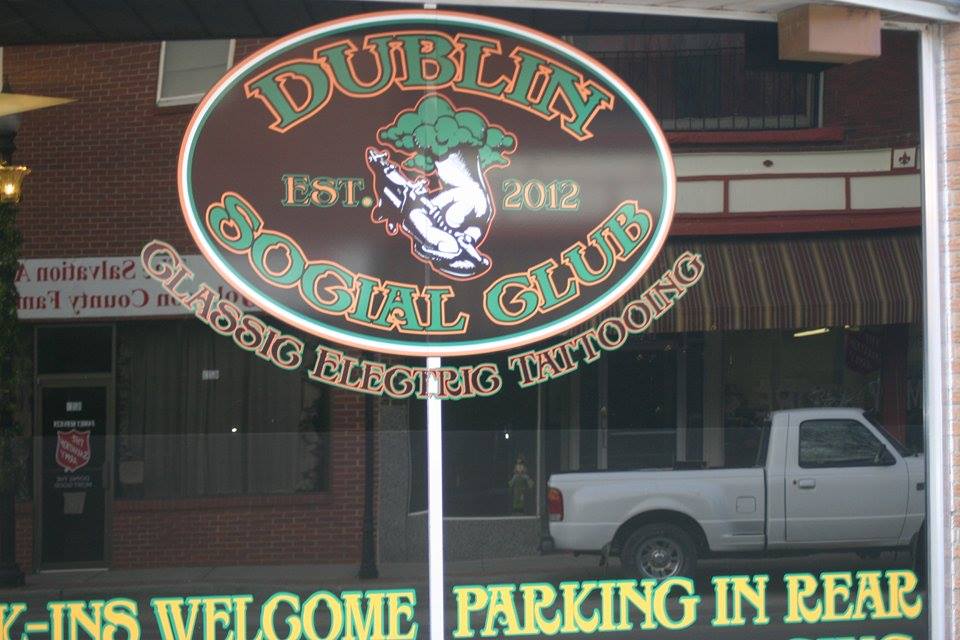 Tony Madrid is a man of many trades, from manufacturing firearms, to raising livestock, to running his own business, to Christmas time charity programs, providing toys and treats for local children.

Within the span of a little over a decade in central Missouri, Madrid has built a legacy carved in ink. He's a tattoo artist, and his connection to tattooing dates back to another coast and another day. He was born and raised in Los Angeles, got his first tattoo at age 15 and began tattooing at 18.  He's now 41.

“When I first started, you couldn't make a living tattooing,” Madrid said. “You did it because it was something you loved to do, and you worked a part time job on the side.”

While living in Colorado in the early 2000s, Madrid found himself working in the corporate world for three years.

“I had yet to tattoo my neck, hands or head,” Madrid said. “After three years with a corporation, he made the shift to tattooing full time.  In 2004, he moved to Missouri, due to an over saturation of tattoo shops in Colorado.

“The cities are overcrowded with tattoo studios,” he continued. “There's a lot of rats going for the same piece of cheese.”

Currently, Warrensburg has two tattoo shops, the Zone Tattooing & Body Piercing, where Madrid worked at for two years when first arriving in the area, and Madrid’s current shop, the Dublin Social Club. In 2007, he opened Living Art tattoo studio, located on East Pine Street. The shop closed in December of 2012 and Madrid opened the Dublin Social Club. One of his reasons for opening up the shop on North Holden Street was a greater visibility.

The shop stands out on Holden Street as the only tattoo shop nestled amongst coffee shops and boutiques. The shop's name is an homage to a past era in which tattooing was illegal in many places, including New York City, and tattooing was done under the moniker of “social clubs.”  The shop's name is also a nod to the Shamrock Social Club, a legendary Los Angeles tattoo shop operated by Mark Mahoney, a tattoo artist who emigrated from Boston to Los Angeles at the start of the 1980s and had a hand in popularizing the black and grey tattooing style.  Everything about the Dublin Social Club is Madrid's vision. The shop walls are painted green in tribute to the Emerald Isle and Irish heritage. An eclectic blend of music, ranging from the punk rock of Bad Religion to the classic country of Johnny Cash, fills the air inside. One typical feature of most tattoos shops is noticeably absent at the Dublin Social Club – the walls are devoid of tattoo flash sheets. Tattoo flash are the common, copyable tattoo designs, flags, eagles, pin-up girls, Samurai warriors, etc. Madrid's reason for leaving out flash art was to discourage spur of the moment tattoos and encourage custom work.

“The only reason I ever ended up owning a shop again is because I wanted a shop run the way it was supposed to be run,” Madrid said.

(Photo Submitted) Madrid and his wife, Shanda, inside Dublin Social Club. The couple celebrated their 13-year anniversary in May.

Madrid is quick to speak about being rooted in an old school ethic, putting an emphasis on loyalty and respect. He also points to some newer trends as eroding tattooing traditions of yesteryear. He puts some of the blame on the rise of glamorized reality TV tattooing programs.

“All of the old ways of the respect and the honor in the industry is kind of dying off with all the newer dudes that tattooed for three or four months under somebody, and then they know it all, and then they go and open their own shop, and you end up with 10 million shops who are putting out the most horrible work on the planet,” Madrid said.

Although Madrid criticizes many newer trends within the tattooing industry, he has also taken younger tattooists under his wing. Kody Miller and Adam Warner began working for him at Living Art and carried over to the Dublin Social Club. Warner moved to Warrensburg while Madrid was at Living Art.

“I lived up north in a town called Carrollton,” Warner said.  “I was a logger, and it was killing me, both mentally and physically, so I decided to move down here to Warrensburg with some of my friends that were going to school here.”

A conversation with Madrid about a job search led to Warner being hired at Living Art, working the front desk, sweeping, answering the phone, etc. Later he gained an apprenticeship.

“I had a habit of drawing whenever I got bored or had some downtime, and I guess he (Madrid) liked the stuff he was seeing from me, so he offered me an apprenticeship,” Warner said.  “At first I said no because I just didn't think that this line of work was for me, but as time went on, I realized that if he thought I had what it takes to do it then I should give it a shot.”

While Warner entered into the profession with doubts, Miller had dreamed of becoming a tattoo artist since childhood.

“My uncle was a Vietnam War vet and had a tattoo, and I was constantly drawing on myself,” Miller said. “When I noticed his never washed off, I asked my parents why, and they explained what a tattoo was. I told them I wanted to do that when I was older. About six months later, we were on vacation, and they took me in my first tattoo shop. It's one of my first memories, and I still remember it like it happened yesterday.”

Madrid said there aren't a lot of joys to owning a tattoo shop.

“You have to deal with all of the headaches of taxes and payroll and inspections,” Madrid said. “A good day is when I'm not here and I don't get a call from here. I know if someone calls from here something has gone wrong.

“I do a lot of other shit,” Madrid said.

Madrid explained that owning his own shop and having employees to watch over things allows him the time to pursue other interests. Some of his other ventures include TM Armory, raising animals, and he used to sell baked goods at the Warrensburg Farmers' Market.

TM Armory is a side-venture of Madrid's, specializing in custom–built AK-47s and AR-15s.

“The firearms is just something I've always loved, from a young age,” Madrid said.“ I wouldn't call it profitable in any way, but I get to do my own thing with the firearms, and it's fun.”

Madrid said the farming comes from his belief in self-sustainability

“It originally started as being able to self-sustain, with our own meat, our own eggs, our own milk,” he said. “I've got a daughter that's almost 10, we went to a livestock show, she saw a little tiny rabbit, and she's got to have that little tiny rabbit.”

From there the animal collection grew.

“We've got about 200 animals we take care of every day,” Madrid said. “It's my slice of peacefulness for the day.”

Even though Madrid is involved in other endeavors, he continues to tattoo, including occasionally hitting the road for tattoo conventions. He and his crew at the Dublin Social Club made two convention stops this year, one at the Carnival of Ink in Springfield, Mo. and another in Chicago. Madrid said the reason for going was related to the younger tattooists working for him. 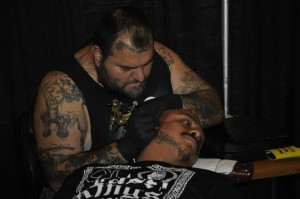 (Photo Sumbitted) Madrid tattoos during the Carnival of Ink in Springfield, Mo. April 25, 2015.

“Conventions, that's really a young man's game,” Madrid said. “That's how the younger dudes get their names out.”

Madrid said conventions are more about networking than making money. He said a lot of tattoo work in the local area isn't that great, and going to conventions is a way to stay in touch with the realities of a changing industry.