LATEST NEWS
03:06 AM
Home Entertainment Film ‘Lost City of Z’ displays human nature on both an intellectual and emotional level 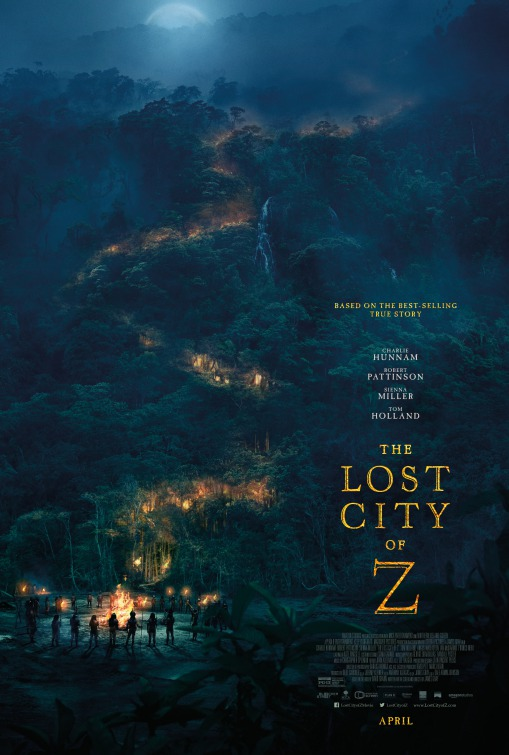 Many movies exist about explorers in search of treasure or lost civilizations, and in many respects, “The Lost City of Z” is just another one of these movies. However, James Gray’s newest feature manages a nuanced take on the seemingly overdone adventure-drama genre.

Charlie Hunnam plays Percy Fawcett, a British geographer, soldier, archeologist and all-around-adventure type persuaded to pursue a surveying expedition funded by the Royal Geographical Society. Though Fawcett has a wife and young son, he accepts the mission in hopes of redeeming his family name and garnering the glory of discovery. “The Lost City of Z” is both an examination of man’s desire to restore his reputation tarnished by his father’s legacy and the struggle to achieve that redemption while playing the role of father and explorer.

One of the more original elements of Gray’s adventure adaptation is the role of Fawcett’s wife, Nina Fawcett, played by Sienna Miller. Nina is supportive of Fawcett’s exploration efforts but grows hesitant with each new expedition, which is understandable considering as time goes on she bears more children and raises them alone without their father. What is most surprising about Nina’s role is her questioning of a women’s place in Victorian England. Nina is single-handedly responsible for Fawcett’s revelation there must be an ancient city deep within the Amazon, but she is ultimately left out of Fawcett’s adventure simply because she is a woman. Miller plays Nina with a fiery wit while still managing to remain supportive in her “role as a woman.”

The dual nature of both Percy and Nina is the most interesting aspect of the film. Gray’s choice to focus on adventure as well as the characters is a refreshing and needed element to be added to the genre. Related to the character examination is the questioning of motives and morals that guided early explorers and colonists. Though Fawcett does want the respect of his peers, he is much more understanding of indigenous populations. While his peers call them “savages,” he calls them “natives.” He believes that Z might predate European civilization—a belief he is ridiculed for his whole life—and he is more interested in working with indigenous populations rather than enslaving or dominating them. Fawcett, of course, is not perfect by today’s standards, but as a turn-of-the-century explorer he was progressive, and Gray is quick to make that distinction.

Not only is “The Lost CIty of Z” engaging on an intellectual and emotional level, it is breathtakingly beautiful for the eyes and ears. Shot in both Ireland and Colombia, the film seems to give almost equal time to each setting with much of the spectacle coming from scenes shot in Colombia. As Fawcett, Henry Costin (Robert Pattinson), Arthur Manley (Edward Ashley) and others make their way down the Verde River, there are beautiful shots of the vast, green jungle and its rolling tree-lined hills. One of the most gorgeous shots is when the team finds the source of the Verde River on their first expedition: huge waterfalls bellow down into a pool of shallow, clear water. As the audience takes in the view, their ears are filled with the music of James Gray’s longtime composer, Christopher Spelman, making the shot fantastically majestic.

Gray manages to make a gorgeous, meaningful and engaging film that explores the jungle as well as human desires and motivations. It is a delight for the eyes, ears and mind.