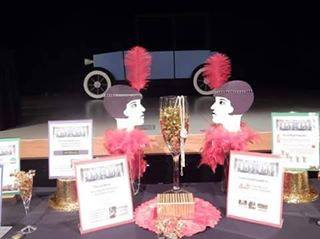 A campus and community collaboration is set to happen this Tuesday when Survival Adult Abuse Center presents a night of awareness and entertainment. The event is the sixth annual Girls Night Out fundraiser. A collection of vendors will be selling items in the University of Central Missouri Union atrium from 5 to 6 p.m. Then the function will officially begin and will include a live auction, silent auction and other amenities. The theme for the evening is “PJ’s and Pearls.”
Survival House is an outreach program in Warrensburg, designed to help victims of domestic violence and sexual assault. Bradley Schulte, volunteer coordinator for Survival, said Girls Night Out fulfills an economic need, as it is Survival’s biggest fundraiser.
“We collect money to use for client assistance throughout the year,” Schulte said. Schulte said an event like Girls Night Out is able to “fill in the gaps,” with money allocated from government resources only going so far. Schulte said the event is essential to Survival House’s functioning. Schulte said he has seen an increase in clients seeking services.
Elaine Sepulveda , executive director at Survival House, explained how the funds raised through Girls Night Out are used.
“The money goes to keep the shelter up. It also goes towards anything they (clients seeking services) may need,” Sepulveda said. “For example, if they want to leave town, if they need a train ticket, bus ticker or gas. We help them pay deposits for apartments.”
Girls Night Out is but one part of the intersection between UCM and Survival House. The connection between the two is multi- faceted.
“We work with the campus a lot, whether it’s through the volunteers,” Sepulveda said. “We also have interns, observation students, of course our main fundraiser, every year, we also do mock interviews, we do speaking engagements.”
“We work together to help any victim,” Sepulveda said.
The campus/community connection influenced Schulte to work for Survival House. Schulte is a 2009 graduate of UCM. He developed interest in Survival House while going through the social work program.
“I did what they call observation hours, for a class, and I did it at Survival House; I got to noticing that domestic violence affects so many sectors of society,” Schulte said. “If you help that one person, you can help 10 other issues at the same time.”
“If I can help that one person, I can probably help solve some other issues related to that,” Schulte said.
Schulte commented on how someone getting out of a domestic abuse situation, permanently, can lead to a greater level of stability in someone’s life, which can serve as a catalyst for that person to move on to greater achievements.
One part of organizing Girl’s Night Out was finding students willing to volunteer, that responsibility was on the shoulders of Kristie Brinkley, Assistant Director of Student Activities and Volunteer Services at UCM. Brinkley had an email generated list of over 165 students interested in philanthropy at her disposal. She said she then forwarded Schulte the names of 26 students willing to help. Along with volunteering their time, the students put together and donated gift baskets for the event.
“The students on our campus, I have noticed, are very giving, and just being able to help someone with whatever event it is,” Brinkley said. “I’ve never had a problem getting the students to help.”
“It’s a very positive event, and people like to come out and support Survival,“ Brinkley said.
Survival’s Sixth Annual Girl’s Night Out: PJ’s & Pearls is scheduled for Wednesday at UCM’s Elliott Student Union from 5:00 p.m.–8:30 p.m., starting in the atrium at 5:00 p.m. and the Elliott Union Ballroom located in rooms 238 and 240 opening at 6:00 p.m.