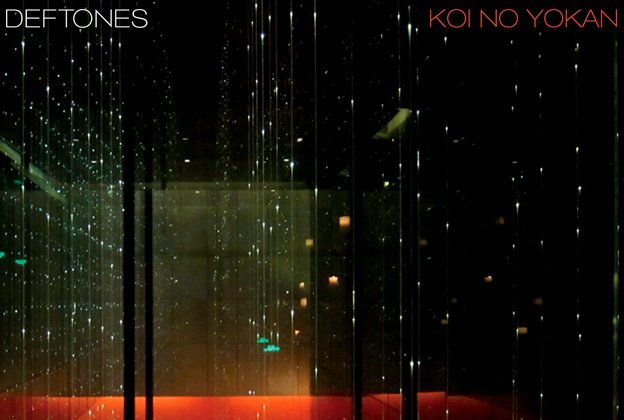 Editor’s Note: Our review of “Gore” is live, check it out here.

With Deftones’ eighth studio album, “Gore” dropping next Friday, we take a look at their last offering, “Koi No Yokan.” The album shows the group’s growth and range, fitting together like a concept album but without the linear storytelling across the songs. The album has what fans have come to expect from the band, with a huge range of songs such as the heavy-hitting “Gauze” to the atmospheric and enchanting “Tempest.”

Opening track “Swerve City” kicks the door open with guitarist Stephen Carpenter delivering an in-your-face riff that sets the tone for the entire album. The album is a blatant reminder of the range the group brings with each album, with the heavy music coupling with vocalist Chino Moreno’s lyrics to ignite the album.

The pace continues with “Romantic Dreams,” with solid riffs and Moreno showing the manic range of his voice, singing the hook as he would to a lover.

The first single from the album was third track “Leathers,” which kicks off with a slow intro – showcasing DJ Frank Delgado’s skill and giving the track an ethereal open before the music blows the doors off and the pacing leaps ahead. The fury of the song is enough to knock the listener on their heels – the same way a roller coaster hits the top of the first climb before gunning it to 60.

When the listener would expect a breather, the group just keeps the pedal to the metal. “Poltergeist” launches with an off-key clap track before Carpenter’s riff again jettisons the track full blast. The guitar work is super catchy on the track but if listeners aren’t bobbing their heads and singing along with this one, time to call the doctor and get those ears checked.

The pace finally lets up with the most beautiful track on the album with the calming tone of “Entombed.” The lyrically heavy song really highlights Moreno’s vocal range, with him calmly singing the track and nailing the hooks. The sweeping style of the song really gives it depth and hammers the lyrics home.

Deftones come right back with “Graphic Nature,” maintaining the tone set with the last track. It’s the guitar work that again shines, with Carpenter’s riffs really carrying the song.

The group found the album’s biggest radio success with “Tempest,” another atmospheric song that showcases Moreno’s range. The song is manic, with Delgado offering a low hum during the opening but the song’s layers building as it progresses.

“Gauze” again goes full blast, with blistering guitar work and Moreno maintaining the melodic tone of the rest of the album’s core. The song requires the volume to 11 as Carpenter and Delgado again build layers upon layers of music that complement the vocals.

Maintaining the dynamics of the middle tracks, “Rosemary” hits with a slow build and then hits hard. The sweeping tempo of the track makes it easy to bob to, but it’s not as in-your-face as the heavier tracks so the vocals and lyrics are easy to identify. It’s easily the most beautiful track on the album, with the vocals and music working together in a fury.

As the album hits the final two songs, Deftones bring the brutality back with “Goon Squad.” The slow opener is another mind game, with the music hitting hard more than a minute deep. Moreno’s vocals again take the manic turn and match the heaviness of the music.

The album closes with “What Happened to You?” The track feels like something you jam on your way home from an odd day, the sweeping tone of the music and vocals building a good tension and Moreno bringing it home with more melody.

The album, which was released about two years after predecessor “Diamond Eyes,” really highlights how the dynamics between Carpenter and Moreno are a major driving force of the band. Drummer Abe Cunningham and bassist Sergio Vega both do great jobs with the rhythm and bass to the band, but it’s the range and give and take between the guitars and vocals that really make the album shine.

Through the 11 tracks, “Koi No Yokan” masterfully delivers a complete album, something lacking in today’s music scene. Running at just over 51 minutes, it doesn’t run its sound into the ground by offering variation of the same track. Each one feels like it could stand alone as a single, yet together it truly delivers. The title is a Japanese term for love at first sight, an apt title for an amazing album.