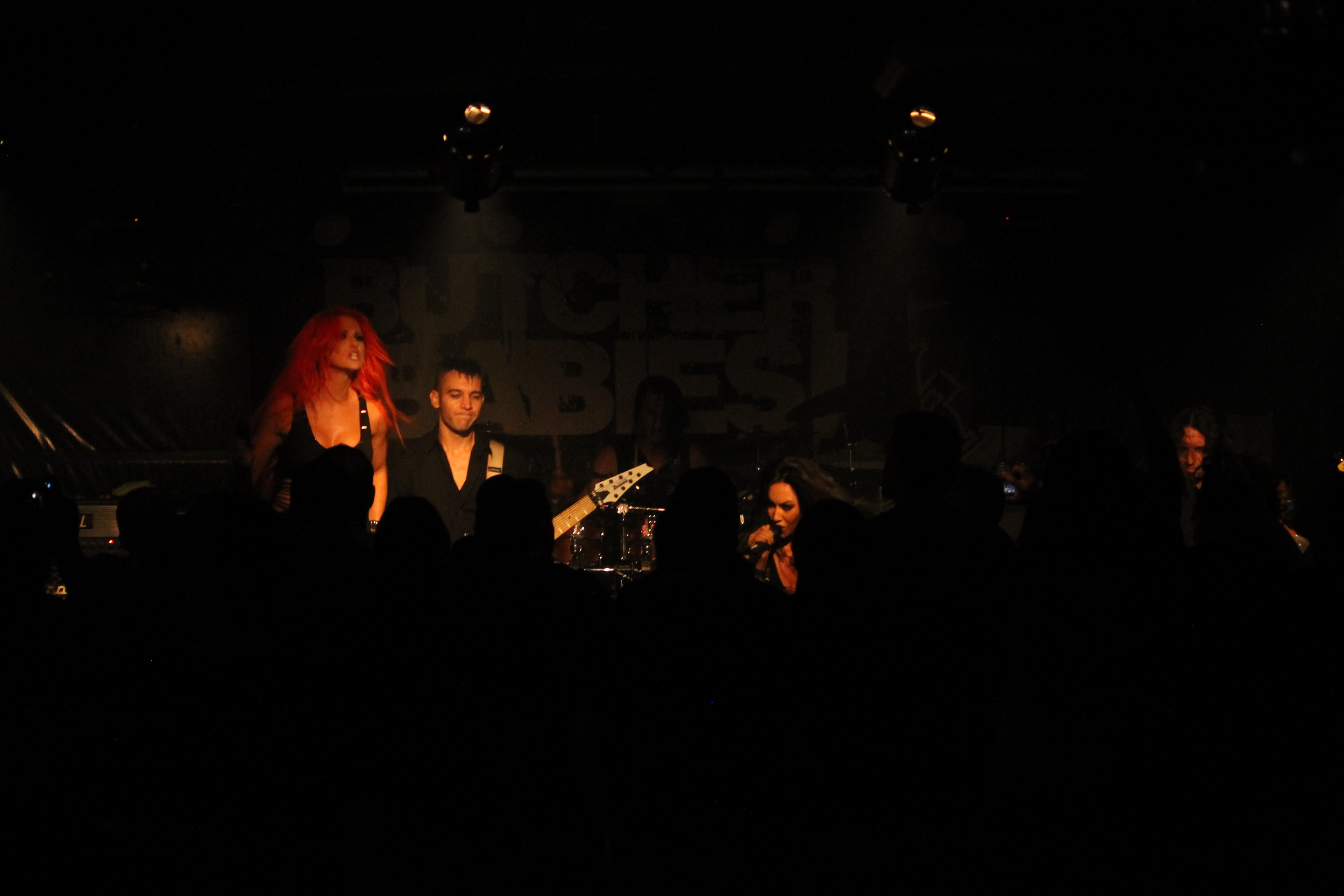 Metal heads descended in force upon the Aftershock Bar & Grill last Tuesday Sept.  as Butcher Babies hit Merriam, Kan. for the third night of their No One Can Hear You Scream Tour. It was the third night of the tour, and the first show since the band released their latest record, the EP “Uncovered,” which features five covers reimagined by the group.

Before the show, CMN had a chance to chat with guitarist Henry Flury and vocalists Carla Harvey and Heidi Shepherd on their tour bus.

“They all come to see you and they know your songs, they sing along, it makes an hour and a half go by way too fast,” Shepherd said.

“The cool thing is you don’t have to warm the crowd up by going instantly right into it, so that’s fun,” Flury added.

“When you do a half hour set it has to be jam packed with high energy songs. With a longer set we have more freedom to do songs people are fans of but are maybe too slow to play for a half hour set, able to talk to and interact with fans more,” Harvey said.

The group hit the stage at Aftershock after their EP, titled “Uncovered,” had been out for nearly 24 hours and peaked at number three on the iTunes rock charts. The five-track release features covers including ZZ Top’s “Beer Drinkers & Hell Raisers” and Napoleon XIV’s “They’re Coming to Take Me Away.”  The group gave CMN some insight on the creative process for the EP.

“We all made a short list of songs that we wanted to do, and then we narrowed it down to one each,” Harvey said. “(They’re Coming to Take Me Away) was my pick because my step-father used to listen to that song in the car over and over and over again, he loved that song. It always stuck out to me because he’s mentally insane, for real. And the song’s about being taken away to a mental institution. And so it was always really creepy and ironic because he loved that song so much. So, I wanted to do that one. It was perfect for our band because we got to really deconstruct it.”

The group also talked about life on the road, giving a glimpse of living truck-stop to truck-stop and using the venue of your next show as a place to work on new music.

“We’ll be at a Flying J or a Pilot stroll in there with your hair all messed up and people looking at you funny to get your coffee,” Flury said. “You get into the routine of it, and it’s kind of a shock to the system at first. Because you’re not used to it you’re used to being home. But once you get used to it you actually just love it and focus on what you need to do.”

“You Scale down your life a lot, even when you go back home,” Harvey added. “It’s different. You don’t need makeup,   you don’t get dressed up and you learn to live out of a suitcase, you just get by with necessities.”

“We appreciate Flying J with their shower system, gas stations with showers are like five star hotels,” Flury added.

The group also got personal when asked about their naysayers, people who didn’t quite understand the vocalists’ taped-up nipples were paid homage to legendary Plasmatics frontwoman Wendy O. Williams.

“We didn’t view it as bullshit, it was a message, a throwback to Wendy O. Williams and the Plasmatics and for anyone who doesn’t know that shame on them, not shame on us for doing it, shame on them for not knowing that,” Shepherd said. “That’s music history right there. And she was the first female in heavy metal so for us to go up there and pay homage to the woman that paved the way we were honored to do that by all means. Yeah there’s flack, there’s flack for everything though. There’s flack for me changing my hair color, flack for (Harvey) doing the things that she does. That’s just normal way of life. Yeah it did shock people, people haven’t seen this in 20 years, why would they do this? And people didn’t know about it, it was like ‘woah.’”

“We don’t regret anything,” Harvey added.

The show kicked off at about 7 p.m. as local Kansas City band Dogs of Delphi took the stage with about 40 people spread throughout the Aftershock Bar. Despite a short set, vocalist Adam Vinck interacted a bit with the crowd – albeit a bit abrasively. The musicianship of the group was great, with drummer Jason Byrd anchoring the band’s sound. They did seem a bit repetitive, but Byrd’s work made you forget about it. Those in attendance pulled their hands out of their pockets by the end of the group’s set and started bobbing their heads to the music.

Next up was another local Kansas City band, Greed Kill$. The five piece group features a male and a female vocalist, like a heavy metal Lacuna Coil. The duo complimented each other well, even on the smaller stage at the venue. The band interacted well with the 70 or so people in the bar by the time their set started. They had a lot more energy, with both vocalists, guitar and bass player close to the front of the stage getting the crowd revved up. Female vocalist Ali Allen flexed her vocal chords quite a bit with some intense screams. The band set the stage for Anti-Mortem, who didn’t disappoint.

With about 100 people in the bar, Anti-Mortem took the stage clad with… GoPros. Vocalist Larado Romo had one attached to his wrist, and there was another on a guitar somewhere. I’m sure grabbing video from their shows has produced some intense footage, Aftershock was ready to let loose by the time these guys started playing. The group has a great sound, with some groovy beats and heavy sound that pairs in sync with melody and screams.

Throughout the Anti-Mortem set, fans were checking a TV away from the stage as the Kansas City Royals were playing the Oakland Athletics in the American League Wild Card game. Despite the distraction, the band’s high energy kept the crowd involved, with the group inciting some circle headbanging during their song “Hellfire Gasoline.”

Butcher Babies hit the stage to a chorus of cheers and went immediately into “Pussy Whipped,” a cover of S.O.D.’s song featured on “Uncovered.” The rapid beat of the music coupled with visceral vocal delivery by Harvey and Shepherd can only be summarized as a conflagration. The band members were all over the stage, with Shepherd balancing on a railing at the front of the stage and both vocalists getting into the crowd to sing.

Early in the set, Harvey stopped the show to give a young man up front a verbal lesson on respect – although I couldn’t see or hear what caused the outburst. As she finished, the crowd cheered and Shepherd called the audience’s attention to a camera at side stage. The video was for fans in Australia, as Butcher Babies had just been announced as a band playing on the Soundwave bill.

The show featured a bit of solo and extended breakdowns by the musicians, which Harvey said was potentially music that could be used on the new album. An array of colored lights and strobes helped pick up the production as well, but the sound definitely carried the show.

For an encore, the band donned spiked masquerade masks and played “They’re Coming to Take Me Away,” with Harvey and Shepherd leaning into the crowd while they sang. The fans were very receptive, with many sticking around after the show for a chance to meet these up-and-coming rockers.

The final question I had for the group was to summarize the band in three words, which Flury did perfectly: