LATEST NEWS
04:27 AM
Home Entertainment Comics It Can’t Rain All The Time: A Conversation with James O’Barr

It Can’t Rain All The Time: A Conversation with James O’Barr

Celebrity guests are always a major draw at any comic book and pop-culture convention. The 2016 Kansas City Comic Con was no exception. Stars of film and television were at top billing, names like Billy Dee Williams, Nichelle Nicholas of the original “Star Trek,” as well as John Schneider and Tom Wopat from the “Dukes of Hazard.”

Among the masses of guests and general attendees, the name of James O’Barr stood out. While not a household name, his is established and known to fans of independent comic books. He is best known as the creator of the “The Crow.”

O’Barr took the time to engage with fans in one of the conference rooms at Bartle Hall Sunday afternoon. He took to the stage solo and ready to immediately answer questions from the audience

The first subject delved into was the yet-to-be-released new film version of “The Crow.” O’Barr carefully and thoroughly explained that the new Crow movie in development is not going to be a reboot or remake of the 1994 movie starring Brandon Lee. O’Barr said a lead actor has yet to be cast, but he commented that he thinks it shouldn’t be an actor with a bulky physique, as the character of Eric should move more like a ballet dancer.

O’Barr explained the forthcoming“The Crow” movie will more closely follow the book. Although the 1994 movie is inspired by the comic book, it became its own entity.

Although the success of the 1994 movie propelled “The Crow” to icon status, the origins of story were found in a previous era. The first issue of “The Crow” comic was published in 1989, yet O’Barr began work on the project in 1981.

The synopsis of the book is that of an engaged couple, Shelly and Eric, whose car breaks down and both are killed by a criminal gang, whereas Shelly is raped and then murdered. Eric returns from beyond the grave to murder those responsible for the ghastly act, and later the couple is reunited in a spirit realm.

The origins of the story were far removed from the average super-hero story.

“The difference between Eric and the Punisher is Eric is not trying to clean up the streets,” O’Barr said. “He wants six very specific people and whoever else happens to be in the room at the time.”

O’Barr mentioned that he is somewhat irritated when people call “The Crow” a revenge story becuase “it’s a love story first.”

The creation of “The Crow” was O’Barr’s attempt at working through his grief over the death of his fiancée who had been killed in a car accident. In the written introduction to the “The Crow” special edition trade paperback, O’Barr explained his reason for creating the comic.

“I’d hoped by putting my murderous fury into ink on paper that somehow, magically, all the pain, hurt, and self-destructive behavior that followed would dissolve,” the introduction reads. 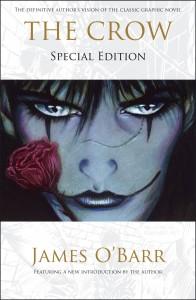 The images in the book are striking, stark in black and white ink, with a noticeable punk, goth and post-punk aesthetic present. O’Barr was influenced by said musical genres. The influence is also noticeable with lyrics and song titles by the band Joy Division sprinkled within the panels of the comic.

“The Crow was written during that time period after punk,” O’Barr said. “Punk was like ‘fuck you,’ and post-punk was like ‘what the fuck happened.’ We were going to change the world, but it didn’t happen.

“So instead of being angry, I became very introspective and depressive. That was the atmosphere the Crow was written in, so all of those bands were very influential.”

Music became an important part of “The Crow” film, fueled by the alternative boom of the early ’90s, as the film’s soundtrack included songs by The Cure, Rollins Band, Rage Against The Machine and Nine Inch Nails covering Joy Division’s “Dead Souls.”

O’Barr initially wanted to use an actual Joy Division song for the movie, but was unable to due to complications that fell through.

“I had to twist Trent Reznor’s arm into covering Joy Division,” O’Barr said. “He was like the Beatles and Joy Division, those are sacred ground. You just don’t fuck with them.”

O’Barr said after some persuading Reznor eventually agreed and was happy about the outcome, with “Dead Souls” becoming a regular encore for Nine Inch Nails for a period time.

O’Barr attributes the continued interest in “The Crow” to being related to universal themes of love, loss and injustice in the story.

“Because it has universal themes that are timeless it just gets passed down from generation to generation,” O’Barr said. “I mean it’s been in print for 25 years. It’s like every few years, there’s a whole new group of goth girls coming up to the table.”