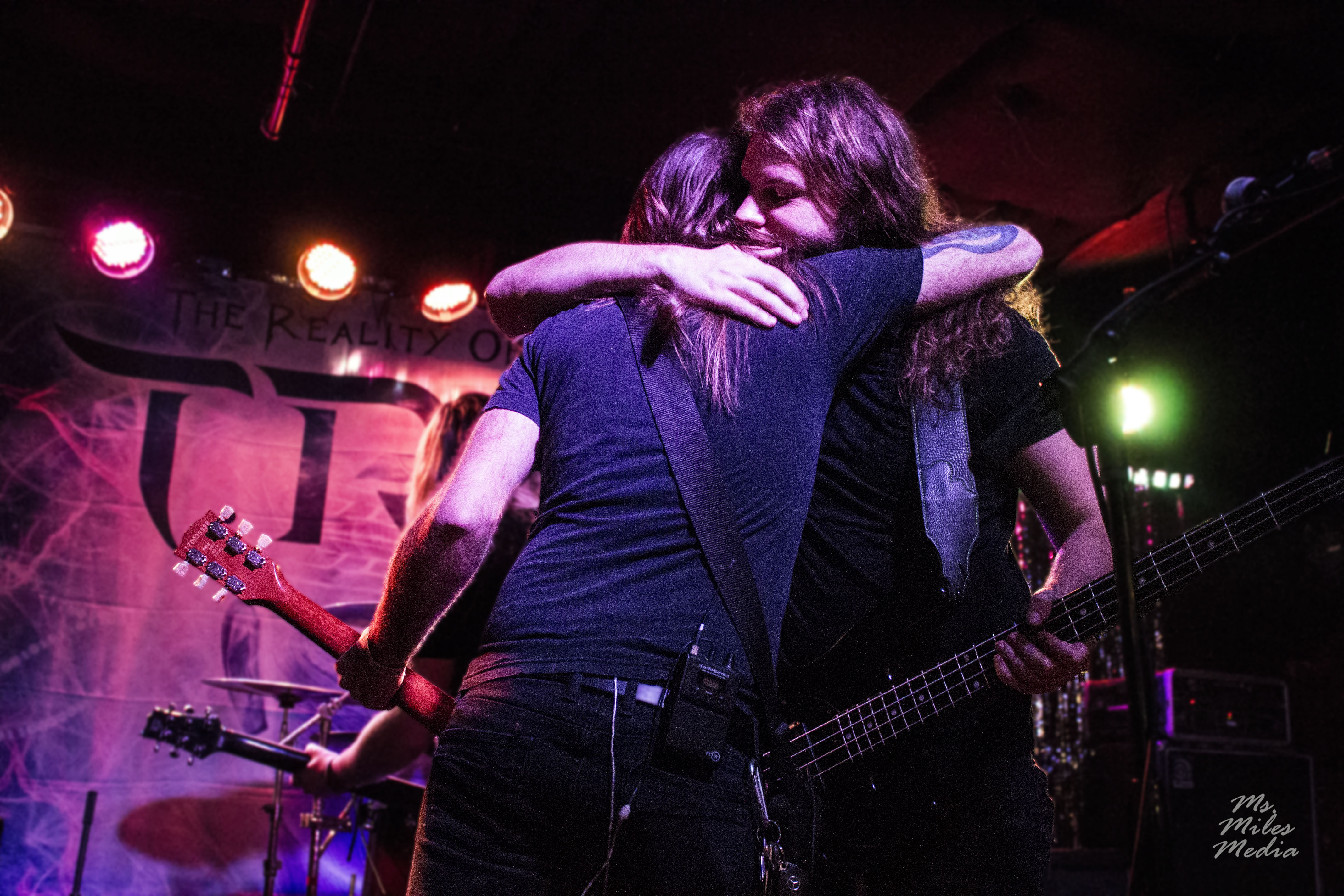 First to grace the stage was Salt, igniting imagination and anticipation with their all-white stage setup and all-white formal attire. A relatively new band formed about a year ago, Salt is comprised of Bobby Gardner on vocals, Kim Painter on bass/vocals and Ryan Fannin on drums.

Their obvious nervous excitement showed a little in the first few songs but was set aside by their third track “Winter,” a bass-heavy groove track that highlights Painter’s vocals and thump-happy bass skills. It turns into a dark-themed tune with an upbeat tempo that makes you move. By the time the self-proclaimed psychedelic/blues/metal band hit “Dark Dark Days,” they were winning over fans with every note.

Salt does a great job of showing off every members’ talents. “Dark Dark Day” highlights the guitar and vocal skills of Gardner as his solos bring the song to life. Killing it on the drums and keeping the deep groove on pace, Fannin easily rounds out the three-piece band and helps make a big band sound.

Closing out their set with soon-to-be fan favorites “Gasoline and Bullets” and “Carry it Back,” Salt left the room full of new fans.

Next on the bill was Mood Ring Circus, a no boundaries rock ‘n roll band. The band includes Justin Larkin Vocals on guitar, Steven Sparks on guitar/vocals, Alexander Hines on bass/vocals and Seth Randolph on drums.

They opened with “Billy Long” and then hit the crowd with “Bleed Out,” a soul groove that shows MRC is a heavy guitar solo band. Each song gives the guitar players a chance to really let themselves go. When you have riff-slaying guitar players like Sparks, you let that man play and he will bring that guitar to life.

The next song, “Prince Albert,” did a wonderful job of showing off Larkin’s vocal style as frontman. He does a great job of representing the music. The percussion team of Hines and Randolph are ideal in bringing alive a funky beat that gets the crowd dancing and “Limbo Daze” is a perfect example.

T.R.O.Y frontman and guitar player Cord Bishop, lead guitarist Kyle Girth and bassist Kane Ransom joined CMN for an interview before hitting the stage. Ransom offered some insight as to why he feels it’s time for him to venture down other avenues, the reason for Friday’s concert farewell.

“It’s been 14 years, a long time, almost half my life perusing the dream,” he said. “It kept me in low straights.”

Ransom said life and the pursuit of things on the back burner were weighing heavy on his passion. He said that while he still loves the band and performing, it just feels like time, with a new job and the inability to travel, to see what else is out there.

“I love playing on stage and overall what I will miss the most,” Ransom said. “It’s where I can let out all my angst.”

To send Ransom off in style, the band had a few things planned for the final show together.

“We have a couple of things planned: throwbacks, a brother-in-law sit-in, and a just all around hardy T.R.O.Y setlist,” Bishop said.

A few new songs that will appear on the upcoming T.R.O.Y album were in the Jan. 25 setlist, according to Girth.

“I would say the diversity in the T.R.O.Y songs fans will hear,” Girth said regarding what he was most excited for fans to hear with the new music. “They are going from one end of the spectrum to the other.”

It was recorded in California with renowned producer Jay Baumgardner of NRG Studios, “a way different spectrum then T.R.O.Y is used to.”

It’s no surprise as to why so many big-name bands have rocked the stage with T.R.O.Y such as Shaman’s Harvest, Pop Evil, Three Days Grace, Skillet, and Breaking Benjamin, just to name a few. They have unmatched energy on stage as they meld as a unit of excitement, talent and passion in every song. The guitar players of T.R.O.Y are known for their synchronized headbanging as well as their audience interaction and energy.

If the crowd isn’t into it, they will make you get into it.

Friday’s concert included a full and explosive set of fan favorites including “Great Dying,” “Wicked World” and “The Reckoning,” a frequent song on local rock station Q102. With so many great songs to pick from, any setlist is a good setlist from T.R.O.Y – and when it includes “Caught in the Fire,” you know it’s good.

The crowd went crazy with the opening song, “Last of the Light Brigade,” with screams, cheers and horns. Next, they hit the crowd with their new track “Talking Shit” featuring Girth on the talk box. It’s a great representation of how T.R.O.Y has grown and matured in its playing and writing style.

A highlight was former member and Kane’s brother-in-law Chris Mau sitting in on a couple of tracks. He joined Erik Milan on drums with his bongo for an epic drum duet that blew the roof off the joint.

Unfortunately, as it always does, the set came to the end and T.R.O.Y broke out one of its favorite cover tracks: The Allman Brothers Band’s “Whipping Post,” which never fails to whip the crowd into a frenzy. It was such a frenzy that the crowd was not letting T.R.O.Y off the stage easily as they demanded an encore. T.R.O.Y gave the crowd what they wanted with “Revolution,” a song that lets the guys really let loose and show off their talent and energy.

For what might be the last song Ransom plays with his rock family, the group ended with their spectacular Black Sabbath rendition of “War Pigs.” They own the song and it was a great way to end the set as it let the men of T.R.O.Y do what they do best: have fun.

Ending the night with the traditional gathering of the crowd for a T.R.O.Y family photo was bittersweet as it was a symbol of the end of an era but a guiding light to what the future will hold.

For more, follow T.R.O.Y on Facebook here. Listen to Metal Head Cosa’s interview with T.R.O.Y in its entirety below via SoundCloud.